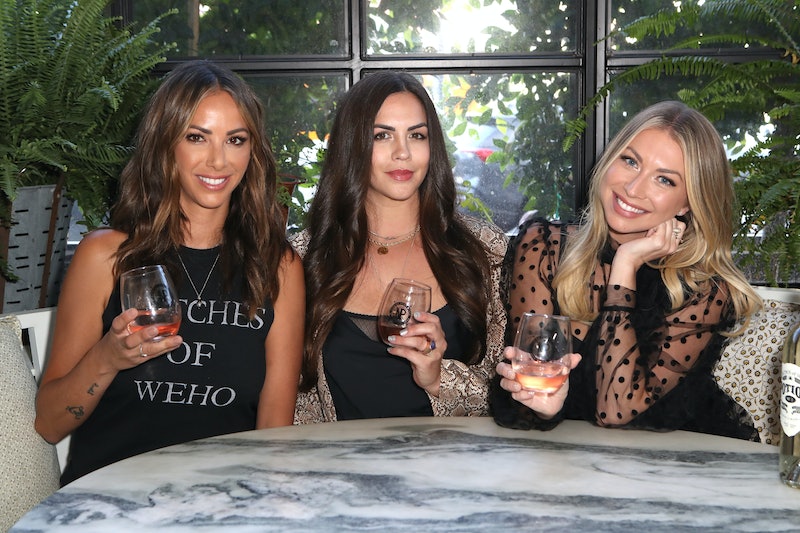 The self-proclaimed Witches of WeHo — Stassi Schroeder, Kristen Doute, and Katie Maloney-Schwartz — have weathered a turbulent friendship, to say the least. Throughout eight seasons of Vanderpump Rules, we've watched them break-up-and-make-up their way through Stassi's sudden move to New York (and subsequent war path), many rounds of Tequila Katie, and Kristen sleeping with Jax. So could it really be the enduring presence of Carter, of all things, to split them up for good?

Sadly, it's looking that way. Since Stassi and Katie expressed frustration about dealing with Kristen's rollercoaster relationship with Carter, the three haven't mended fences — despite the fact that Kristen is no longer with him (for real, this time). "They're not really telling me why they broke up this friendship other than, 'It was really toxic to hear about you and Carter and it was really taxing on us,'" Kristen said on the Juicy Scoop podcast last week.

But not all hope is lost. All three are still involved with their Witches of WeHo wine line — even if, according to Kristen, Stassi isn't as invested anymore. And earlier this month, Kristen told HollywoodLife that she was on casual speaking terms with Stassi and Katie, particularly regarding "light-hearted" topics and praising each other's accomplishments. "I still love [Stassi]," she explained. "She's still my sister, and she deserves to know that I'm proud of her."

It seems that Katie, however, isn't on the same page. In January, she reposted an Instagram comment from a fan outlining her issues with Kristen on her own Twitter account, saying that she couldn't sum it up better herself. "I have so much love for Kristen and have supported her to the point it became truly difficult," she said. "It became poison."

Stassi, meanwhile, told Bustle that though she gladly speaks to Kristen when they're out with their gang, she hasn't decided whether or not to invite her former friend to her upcoming wedding to Beau Clark. "I hope that we get to a point where I feel comfortable having her [at my wedding]," she said. "But that just doesn't make sense to share the most important day of my life with somebody who is angry with me."

Despite their issues, it seems that Stassi, Kristen, and Katie all want to mend their friendships, or at the very least, get to a place where they can be cordial. Many people have been using their forced self-quarantines to connect with people they haven't spoken to in a while. Perhaps it's time for a Zoom chat, ladies.

More like this
'RHOSLC’s Heather & Whitney Are Still On A “Friendship Break” After Season 3 Reunion
By Jake Viswanath
Erika Jayne's Estranged Husband Tom Girardi Has Been Indicted On Fraud Charges
By Jake Viswanath
RHOP’s Robyn Dixon Explained Why Juan Paid For Another Woman's Hotel Room
By Brad Witter
Spencer Matthews’ Impressive Net Worth Expands Far Beyond Chelsea
By Sam Ramsden
Get Even More From Bustle — Sign Up For The Newsletter
From hair trends to relationship advice, our daily newsletter has everything you need to sound like a person who’s on TikTok, even if you aren’t.