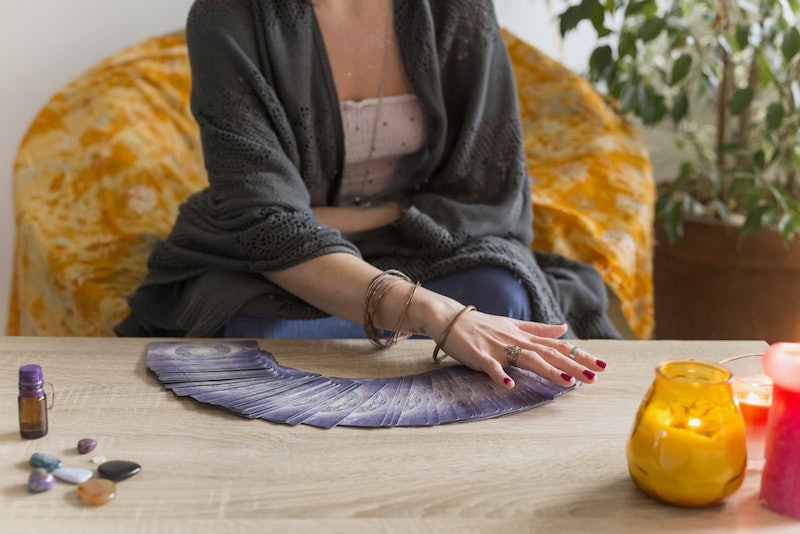 On the day of the solar eclipse, I woke up with sense of a strange energy — not good, not bad, but alive with possibility. The link between solar eclipses and new beginnings is well-established, and the streets in my corner of the universe were tense with anticipation of what the long-awaited transverse of the moon across the sun might bring. The eclipse is said to usher in the unexpected and, since this eclipse in Leo occurs while Mercury is in retrograde, people who follow astrology are bracing themselves for well, literally anything.

What a good time, I thought, to call upon an entirely different divination modus operandi, and have my cards professionally read for the very first time.

But is tarot related to astrology? Both can be used not to tell the future, but to interpret events happening around you, and to set intentions relating to how you handle those events like a grown-ass lady. Tarotology has a long-established (and fascinating) history, tracing its origins back to the Renaissance. The intricately arted decks are comprised of a Major Arcana, or set of 22 trump cards, and a Minor Arcana, or four suits of 14 cards each linked to each element (fire, water, air, and earth). Each card has a unique meaning, and you can pull just one to gain clarity on an issue that’s present in your life, or a full spread to get a more contextualized sense of how to approach the matter.

If you’re wondering what a seemingly random set of cards has to do with the position of the moon, the answer is, lots. Ruby Warrington, founder of The Numinous, says in her book Material Girl, Mystical World, that “Astrology and tarot can be used to complement each other.” Each card is charged with the energy of a certain astrological sign, so if you’re choosing a Major Arcana card to guide your spread, you might be inclined to choose the one that corresponds with your sun sign (for my fellow Caps out there, that’d be the World card). When I pulled my daily card about an hour before the moon began to obscure the sun, I got the Fool — a card of “pure energy” and “beginnings,” according to the tarot app Mystic Mondays. (Insert shady eyes emoji here.) So, tarot (like astrology) may not be purely scientific, but you got to hand it to them — it can offer some pretty uncanny results.

While I’ve been an amateur tarotologist for some time, I’d never gotten my cards read professionally. But since the eclipse is a harbinger of new beginnings, I figured now might be as good a time as any to see if a professional could offer greater insight on what the end of this eclipse cycle might bring. So, I dressed in my best Beyoncé mystical realness and set off for the nearest psychic as the moon was reaching its peak coverage of the sun.

My spiritual advisor offered me three options of tarot readings to pick from: one to explain my past, present, and future; one to chart out what lies ahead for me in love and success; and one to provide a full run-down of what my entire life had in store for me. I went with the most basic, the past-present-future reading, and she asked if there was a reason that I’d come in today. I explained that because it was the eclipse, I wanted to see if I would get a reading that was particularly charged with meaning, or that gave any special instruction as to how I should best take advantage of this new beginning.

And reader, I can tell you that the reading I received was incredibly enlightening, and not just in contrast to the darkness outside. I don’t know if I was particularly receptive to the guidance I was given because of the special aura of the eclipse, or if it was all just placebo effect, but I walked out of that room with a much greater faith in the way the events of my life may unfold.

The woman cautioned me to, under no circumstances, record or publish any of the details of my reading, so as not to invite negative energy to the interpretation. But there isn’t any reason to reveal them, anyway. (Though I will say that there were some aspects of the reading that were perfectly in line with what my horoscope for this month had predicted.) Even if it were possible to recreate my reading, what’s important in tarot is the interpretation you take away from the experience as a whole. Tarot can help you interpret the events of your life, but it can’t predict the future; you alone are in control of your destiny.

So yes, it was very much worth it to have my tarot cards read during the solar eclipse. I felt a deep — dare I say cosmic — connection to the reading I was given, and will likely take it more seriously than I would have if I’d gotten my cards read on a non-astrologically significant day. If you, too, want to give eclipse-enhanced tarot a whirl, don’t worry that you’ve missed your shot; you’ll only have to wait until 2024 for the next one.

More like this
Here's Everything You Need To Know About Shuffling Your Tarot Deck
By Brittany Beringer
Think Your Partner Is Cheating? These Tarot Cards May Confirm Your Suspicions
By Kristine Fellizar
October's Astrology Includes Mars Retrograde & A Solar Eclipse
By Nina Kahn
Angel Number 333 Is All About Self-Love & Alignment
By Brittany Beringer and Kristine Fellizar
Get Even More From Bustle — Sign Up For The Newsletter