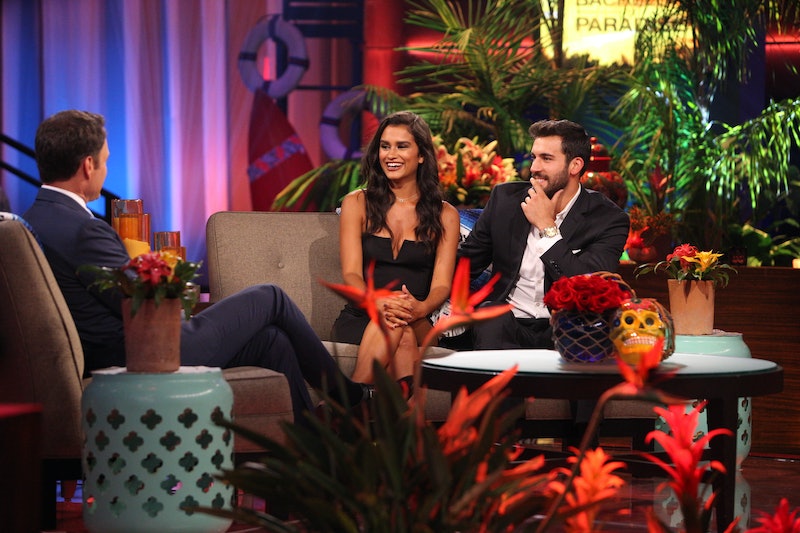 These days, it seems the Bachelor franchise isn't as strict about keeping its spoilers under wraps: The show announced Rachel Lindsay as the next Bachelorette while she was still vying for Nick Viall's final rose, photos of Robby Hayes and Amanda Stanton holding hands made the rounds before Bachelor In Paradise even premiered, and now, Taylor Nolan and Derek Peth are officially engaged. But given Bachelor Nation's less than successful track record when it comes to long-lasting couples, it's fair to ask: Are Taylor and Derek still engaged after Bachelor in Paradise?

Considering Derek popped the question less than two weeks ago, it should be no surprise that yes, indeed, the couple is still betrothed. According to People, Derek proposed during the Aug. 30 taping of Bachelor In Paradise's aftershow, and Taylor, of course, said yes. The outlet also shared details about Taylor's ring on Monday morning in an interview with the franchise's go-to jewelry designer, Neil Lane, who helped Derek pick out a 2-carat platinum ring set with a center round diamond.

And Derek and Taylor haven't been shy about celebrating, either. They appeared together on the KTLA 5 Morning News show on Monday, where they confirmed the engagement and showed off Taylor's ring, which hasn't even been sized yet. "I think I spent about 48 hours straight practicing what I was going to say, and it ended up happening in front of a couple hundred people, so that's a little bit of a scary thing," Derek said. "I think I stayed pretty calm, but I blacked out about halfway through." Added Taylor: "I mean, I blacked out just going on stage, and I didn't even know anything was going to happen."

The pair also weighed in on the chaos of dating on a reality TV show, explaining that thankfully, they hit it off right away and didn't have to watch each other go on dates with other people — at least after they got together, since their Bachelor/Bachelorette seasons are still open for viewing. Derek continued:

"The best thing was that we didn't end up in that mess at all in Paradise. A lot of people end up in that ping pong game, kind of back and forth, but we were solid from the start. There [were] never any questions."

And if, for some reason, you're still not convinced, both Taylor and Derek have plenty of mushy Instagram posts online for fan's perusal — something they probably wouldn't be sharing if they'd already called it quits. "Holy crap, time flies when you're making out!" Taylor wrote alongside a photo of her and Derek kissing ahead of the finale. "Are we written in the stars baby, or are we written in the sand?" Derek captioned a snapshot of them walking along the beach. And then, with another picture of them making out, he wrote simply: "Gross ... #GetARoom."

So, there you have it, folks. Derek and Taylor are still head over heels for one another, and from the looks of it, are well on their way to becoming the Carly and Evan of BiP Season 4.

Of course, Bachelor couples often find themselves on unstable ground after moving their relationship into the real world: Marcus Grodd and Lacy Faddoul got married (albeit not legally) in BiP Season 2 but later split, and Nick Viall and Vanessa Grimaldi recently broke up after only five months of dating. But Derek and Taylor have been going strong since they first got together, so here's to hoping they're one of the few who can make it to the altar and not look back.