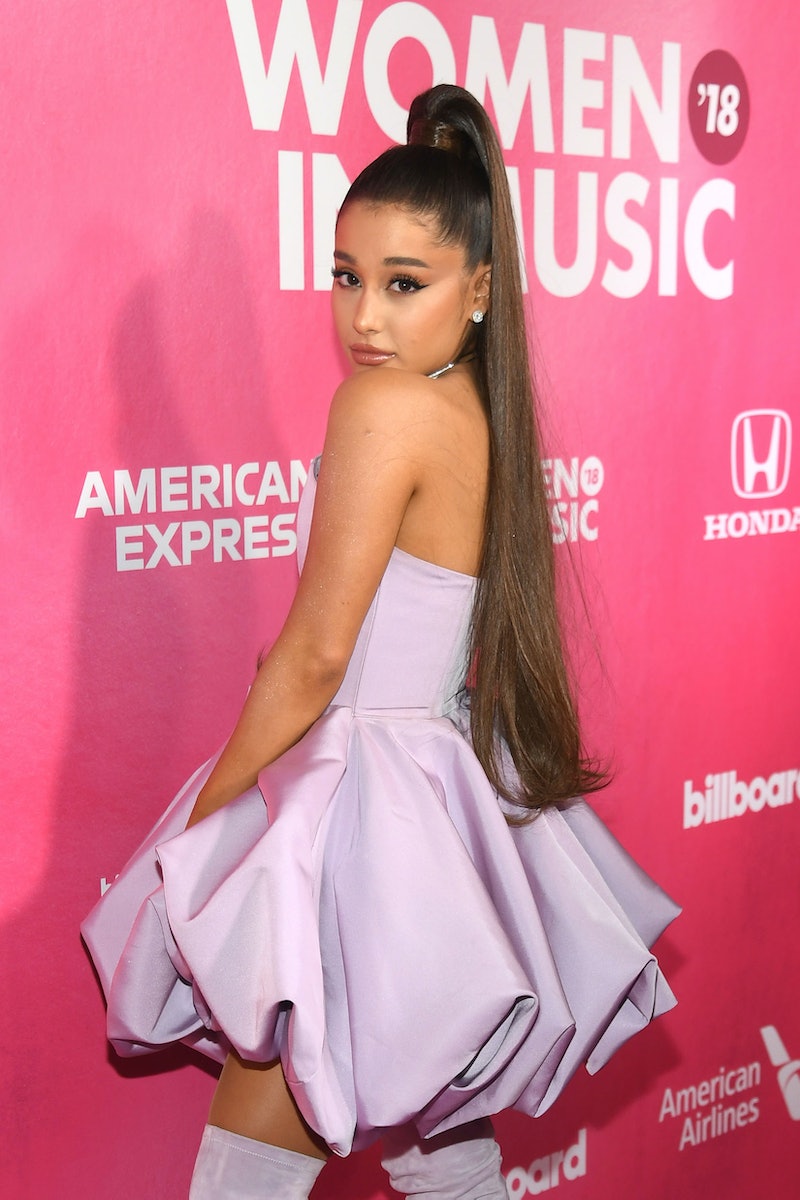 Ariana Grande is celebrating one major part of her "Bloodline" — her mother. Grande wished her mom a happy birthday on social media Monday, June 10. Joan Grande is a frequent fixture on her daughter's Twitter and Instagram, sharing words of excitement for new music. So, Grande returned the love for her mom's big day.

On Twitter, the Thank U, Next singer paid tribute to Joan by tweeting, "happy birthday to the most incredible human being in the universe @joangrande see u soooon." Joan sweetly replied, "Thank you darling... I'm two minutes away and I love you sooooo much." Several fans pointed out that Joan's response was reminiscent of a line in Grande's song, "In My Head," that says, "I'm two blocks away, I'm coming over."

But Grande's birthday wishes didn't stop there. She later tweeted, "i love u i love u i love u @joangrande," before posting some black-and-white throwback photos of herself and Joan, which she further explained on Instagram. The Grammy winner shared the ultimate throwback of herself as a baby alongside Joan as they both lounge in the grass. Grande captioned the photo: "happy birthday best friend @joangrande you are the strongest, most generous, funniest and most fiercely compassionate human being in the universe and i'm so grateful to learn from you and to be your daughter," alongside a black heart.

And finally, the "break up with your girlfriend, i'm bored" artist paid homage to her mother with a series of black-and-white photos and videos of Joan. In one video, Joan and a younger Ari listen to the Céline Dion-Barbra Streisand duet "Tell Him," as Joan dramatically sings. In another, Mama Grande freaks out over a song her daughter has played for her. Ariana captioned the series, "my best post." Clearly, the love between these two is not a "Problem."

However, The Joan Grande Birthday Content still didn't end there. Ariana's brother, Frankie, also got in on the action by posting several photos and videos for his mom. He captioned his post:

"happy birthday to the greatest woman to have ever walked the earth. thank you mommy for everything that do. enjoy today. take a step back and see how loved you are and allow us to be the ones that take care of you for a change... because you are so wonderful and always put others first, so let us be the ones that put you first at least for today. i mean it! we got you!!! (i promise you can go back to being superwoman tomorrow. but for today, take a bath please!) i love you with all of my heart. thank you for shaping me into the man i am today. happy birthday mommy."

One thing is for certain: the Grandes know how to celebrate the birthdays of those they love.