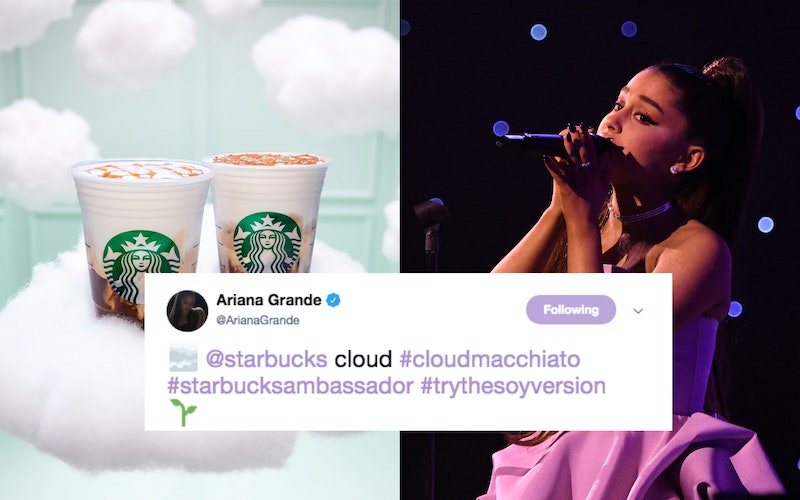 Somewhere Simba just gave a little shudder in the jungle and doesn't know that it's because nothing is quite as full-on "Circle of Life" as what just happened on this here internet this morning. After a day of teasing a collaboration — and, perhaps, a lifetime of waiting for the ultimate destiny that her last name was always going to lead her to — Ariana Grande announced she is Starbucks' newest ambassador on Twitter. Not only that, but she did it with a series of photos that are so unspeakably cute that you might not even need the new drink she's repping to wake you up. (Just kidding. God may be a woman but she is also caffeine.)

Fans have known something was going to drop in the Starbucks x Ariana department since March 4, when the megastar tweeted at Starbucks with a series of emoji, including two clouds, a coffee cup, and a gray heart. Now the collab is official, and has a new extremely Ariana drink to boot — on March 5, Ariana Grande tweeted images of herself with Starbucks' new Cloud Macchiato while wearing an iconic green Starbucks barista apron, while getting some puppy love from her dogs Toulouse and Myron. In the tweet, she announces both the new drink that hit Starbucks' permanent menu today, as well as the fact that she is now officially a Starbucks ambassador.

Starbucks immediately responded to Ariana Grande's tweets with details about the new Cloud Macchiato, which is available on the menu as of Tuesday, March 5. The Cloud Macchiato will be available in two versions: the Iced Caramel Cloud Macchiato, and the Iced Cinnamon Cloud Macchiato. Per Starbucks, the "cloud" refers to the new topping on the drinks, a "cold milk foam that has a light, fluffy and silky-smooth texture."

While the details about what exactly Ariana Grande's ambassadorship at Starbucks will entail have yet to be released, fans are super on board with the announcement, and the adorable way she made it.

Truly, if there were a moment for Ariana to fulfill her Grande destiny, there's no moment more perfect than the launch of Starbucks' Cloud Macchiatos; Grande's love for clouds is so well-known that not only did she say it was part of the inspiration for her 2018 album Sweetener, but she got the outline of a cloud tattooed to her hand, and even launched an Ariana Grande-branded cloud perfume. It is truly a moment to be living out cloud.

The excitement of Ariana Grande's ambassadorship aside, I highly recommend you try the Cloud Macchiato; Bustle has the opportunity to try both versions before it launched, and the foam topping is otherworldly. That, and as counterintuitive as it may seem to chug an iced coffee drink in the dead of winter, it will put a ~spring~ in your step (sorry). The Cloud Macchiatos are now a permanent menu addition, so you can get your hands on one now faster than you can say I want it, I got it.