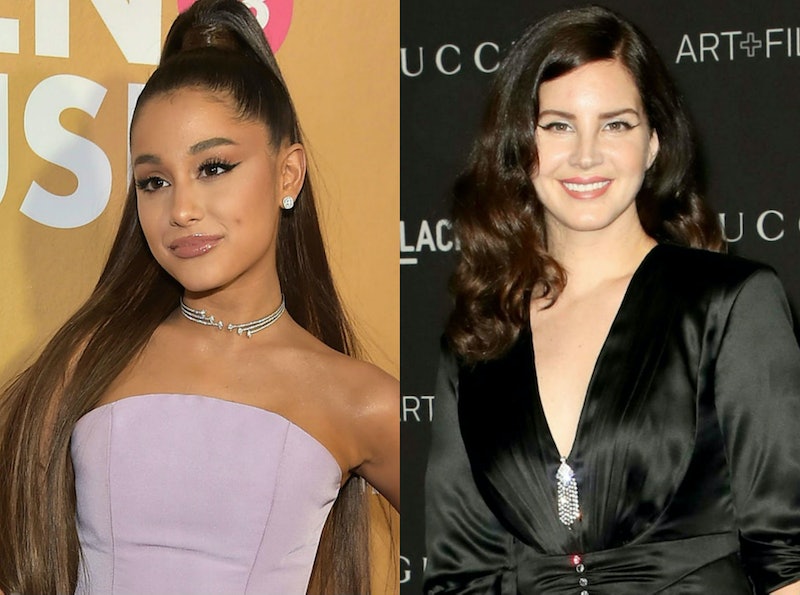 Here is one cover Arianators can't stop listening to. Lana Del Rey covered an Ariana Grande song on Sept. 9 during her BBC1 Live Lounge. Del Rey sang "Break Up With Your Girlfriend, I'm Bored," and in not-so-shocking news, her interpretation of the track is beyond good. So much so, both Grande and her fans couldn't help but praise Del Rey's cover.

Grande retweeted a video of Del Rey's performance on Monday and captioned it, "oh my god @lanadelrey i love u so very very much." The Sweetener artist also gushed about the cover on her Instagram Story by sharing another video. If you haven't heard Del Rey's version yet, you can listen to it in the clip below.

"Break Up With Your Girlfriend, I'm Bored" first came out in early February, and apparently Del Rey has been a fan ever since. Actually, the 34-year-old musician admires Grande just as much has other fans do. According to Fader, Del Rey said during her recent live performance about covering Grande, "I thought about sending her a screenshot of a list of preferred covers I was sent, which had about seven of her songs on it, so she wouldn't just think I was a mega-fan."

Prior to her BBC1 Live Lounge praise, Del Rey raved about Grande in an August interview with the New York Times. After the publication asked her about her decision to "dabble" in pop (like her recent collaboration with Grande and Miley Cyrus for the new Charlie's Angels movie), Del Ray said, "First of all, I really, really like Ariana. I had been listening to Dangerous Woman a lot. I got her number at some point and we would chat. And then Thank U, Next came out and I freaking loved that record. Every song, I was like, how did she write that? So when she asked me to do the Charlie’s Angels feature, I was like, 'All right, if you really want me to!'"

If you don't know, Grande is co-executive producing the soundtrack for the reboot starring Kristen Stewart, Naomi Scott, and Ella Balinska. For those out of the loop, Cyrus, Grande, and Del Rey's song, "Don't Call Me Angel," drops on Friday, Sept. 13 and serves as the film's official theme song.

Speaking of a collaboration, fans hope to see more from Del Rey and Grande. They don't just want the Charlie's Angels collab, they want more, especially after hearing Del Rey's cover. Here are just a few of the many tweets hoping the two will join forces again:

Fans Need To Hear Them Together, Now

They Should Record A Duet

Ariana Should Return The Favor

So much yes to this.

There's no doubt their song with Cyrus is going to be epic.

Their Support For One Another Is Amazing

Grande and Del Rey are two massively talented women in the music industry. To see them uplifting one another is empowering, to say the least. Another collaboration between them would certainly be amazing, but fans will just have to wait to see if that happens. Until then, they can try to patiently wait for "Don't Call Me Angel" and watch Del Rey's "Break Up With Your Girlfriend, I'm Bored" cover on repeat.