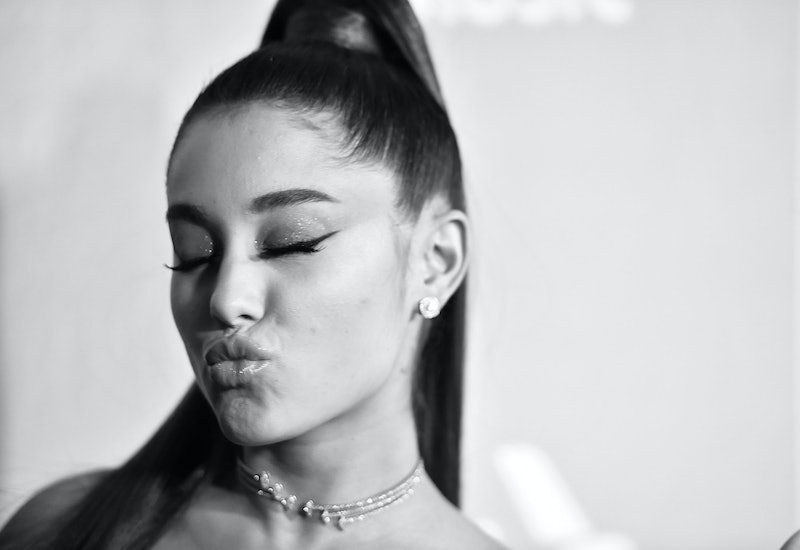 There's only a few days left until Ariana Grande releases her highly-anticipated fifth album, but she's nowhere near done sharing surprises and new music with her fans. On Tuesday, Feb. 5, Grande announced that her next single will be "Break Up With Your Girlfriend, I'm Bored," which — despite the fact that the album hasn't been released yet — is already a fan-favorite from Thank U, Next.

After a fan asked Grande on Twitter what song she was planning to release as the next single, she confirmed that the sassy track would indeed be her next release. "buwygf,ib," Grande responded, simply. In January, shortly after the Thank U, Next track list was released, the singer explained that "Break Up With Your Girlfriend, I'm Bored," would have a completely different sound than any of her previous releases. When one fan asked if the song has "the same energy as 'Break Your Heart Right Back,'" — which was on Grande's 2014 album, My Everything — Grande noted that there would be "no repeats or 2.0s" on Thank U, Next.

Around the same time, the singer also revealed that fans have already heard a snippet of "Break Up With Your Girlfriend, I'm Bored," joking that it was "on a less deep note" than some of the other events and feelings that inspired her new album. And that fun vibe carries through to it's production, as according to Genius, the song also features a sample from "It Makes Me Ill," a fan-favorite track from *NSYNC's second album, No Strings Attached.

Earlier in January, Grande noted that the song was a last-minute addition to the track list, as she decided that there was one song that she didn't want to share with fans, after all. "I added a fun one (lol) to replace one that i decided i don’t think wanna share w the world. so we back to twelve tracks. i appreciate u understanding in advance," she explained on Twitter. (The track in question seems to be "Remember," which Grande first teased in the "Breathin'" music video, back in November.)

While Grande has yet to share any information about the inspiration behind the song, "Break Up With Your Girlfriend, I'm Bored" has already become a hot topic of conversation on social media, as some fans have speculated that the song is about Grande's ex, rapper Big Sean, according to HelloGiggles. Although the couple hasn't been linked since 2015, the rapper was featured in Grande's "Thank U, Next" video, where she wrote in her "Burn Book" that he was "so cute, so sweet" and "could still get it."

Adding to the speculation, Big Sean was rumored to have split from his girlfriend, singer Jhené Aiko, in November, after she covered up a tattoo of his face that she had on her arm. "I covered ALL my tats w/ a big ass Dragon w/ a Phoenix wing breathing life and light into a new galaxy," the singer wrote in a now-deleted tweet, after fans asked about her new ink. "NEW ART! NO BEEF! ALL LOVE!...and im STILL adding more."

Of course, "Break Up With Your Girlfriend, I'm Bored" isn't the only song on Grande's upcoming album that has fans wondering about who inspired it. In January, Grande's friend and frequent co-writer Victoria Monét refuted the idea that her song "NASA" is about Saturday Night Live star Pete Davidson. Retweeting an article from E! News, which attempted to break down Grande's track listing, Monét wrote, "Yo I promise we did not write a whole song about this mans shirt [crying, laughing emoji] promise. it’s just a universally common word." After noting that the song was about "space," on her own Twitter account, Grande explained that "NASA" was indeed inspired by "a man," but didn't drop any more information about the track.

Thankfully, there are only a few more days until Grande releases Thank U, Next on Feb. 8, and fans can find out once and for all, who inspired some of the singer's most relatable and exciting tracks. In the meantime, at least there's always the "7 Rings" video to play on repeat to hold us over.