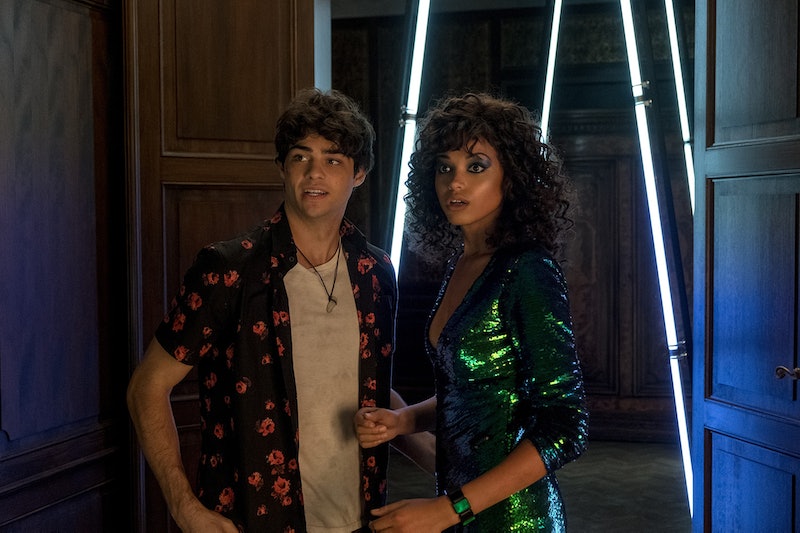 Charlie's Angels are back and ready to kick some butt. Thankfully, the crime-fighting agents, played by Kristen Stewart, Naomi Scott, and Ella Balinska, found the perfect song to soundtrack all that kicking. The song in the new Charlie's Angels trailer, released Thursday, June 27, is a collaboration between three badass pop stars: Ariana Grande, Miley Cyrus, and Lana Del Rey. And they've got some sage advice for all their male adversaries: don't call them angels.

Janelle Monáe's "Make Me Feel" is the first song fans hear in the opening shot of the trailer, which features a very blonde Stewart cooing, "I think women can do anything" before taking out a misogynist who's stealing humanitarian aid money. Right before the one minute mark, though, you'll hear Grande, Cyrus, and Del Rey's official Charlie's Angels song, a twinkly electro bop that will get you pumped for all the action to come.

The trailer for the Charlie's Angels reboot only previews the track, which is nameless for the time being. Though, if one was to take an educated guess, based on the chorus, the song is likely called "Don't Call Me Angel." Even still, keeping the song's title a mystery feels fitting for a movie about undercover lady spies who don't know the identity of the guy they're working for.

What fans do get to hear is Cyrus singing "I don't like that, boy" which can't be good for him, whoever he is. "Keep your pretty mouth shut," she adds, which certainly sounds more like an order, than a request.

Then Grande arrives to soundtrack the newest Angel Elena's (Scott) tour of the closet, which includes designer everything and a weapons arsenal that is no joke. Seriously, stay away from the mints, and, as Grande reminds everyone, don't call them angels. That said, Grande was happy to throw an angel emoji into her tweet celebrating the new trailer.

The three women have been been teasing this new single on Twitter for the past few days, getting fans pumped for this team-up, which continues in the tradition of amazing Charlie's Angels-inspired singles. The original Charlie's Angels movie starring Drew Barrymore, Cameron Diaz, and Lucy Liu was soundtracked by Destiny Child's "Independent Women, Pt 1," which let everyone know that everything they've got "they bought it." The same can obviously be said of Grande, Cyrus, and Del Rey.

While not much is known about this new Charlie's Angels single, that fingers crossed gets a music video, fans did get some details on the music in the film. Grande will co-executive produce the Charlie's Angels soundtrack. She made the announcement on Instagram on Thursday, writing that it's been the "coolest f*cking thing in the world. beyond grateful for this opportunity and can’t wait for everyone to hear the music and see this phenomenal film," which hits theaters November 15.

Let's expect this soundtrack to be bumpin', since, as io9 pointed out, the new Charlie's Angeles includes at least one dance number. Here's to hoping that "handsome nerd" Noah Centineo will also get a chance to show off his dance moves with a song handpicked by Grande.