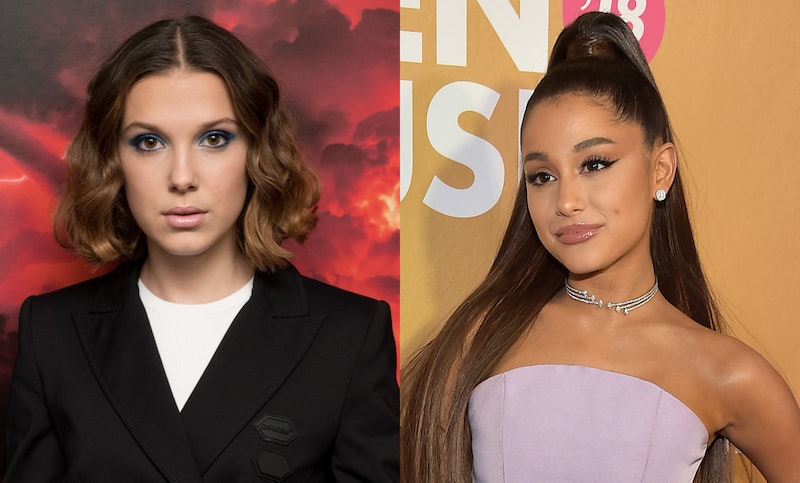 While Millie Bobby Brown and the Stranger Things cast are close off-screen, she has another famous pal in the spotlight. As fans have probably noticed, Millie Bobby Brown and Ariana Grande's friendship is only getting stronger. They've consistently supported each other, including Brown's recent attendance at one of Grande's shows. What better way to kick off summer and support your friend, who happens to be one of the biggest pop stars in the world, than attending her concert?

At the June 14 stop in Brooklyn, the actor, best known for her role as Eleven on Netflix's Stranger Things, was spotted in the crowd dancing with fans while Grande performed hit after hit. The pair later met up backstage and took a photo together posted on Brown's Instagram with the caption, "Ily sis."

Despite being 11 years apart in age, Brown and Grande have been friends for quite some time now. This isn't the first time the pair has taken to social media to gush over each other. Back in February 2019, Brown shared a photo of herself holding gold balloons, captioning it, “February 19th, 2004 = 15 years old.” Shortly after, Grande commented, wishing Brown a happy birthday on her Instagram page. Brown replied back, “@arianagrande thx ur the best doppelganger a girl could ask for. ilysm calling u now lol.” Can you name a more iconic duo?

Continuing their trend of social media support, back in May 2018, Brown took to Instagram to post an adorable photo of her then-boyfriend Jacob Sartorius. Grande commented under the couples picture like any big sister would to jokingly tease the two love birds, writing, "I wasn't even allowed to leave my house til I was 20." The singer wasn't the only celebrity to double-click on the photo. Hailey Bieber and Kendall Jenner also liked the snapshot — but the compliments don't stop there.

While attending the 2018 Golden Globes red carpet, Brown stepped out in a black Calvin Klein dress. The British actor received praise from fans throughout the evening, but one compliment outweighed them all. Brown took to her Instagram Story to post a screenshot of a text conversation between her and the pop star.

Grande was everything anyone would expect from a proud big sis. The singer, who couldn't contain her excitement over her outfit, sent her numerous texts of her admiration writing, “that’s...unbelievable...who is it?” Then, later she added “unbelievable” and a classic “wowowowowow” reaction.

As much of a fangirl Grande is of the young actor, it's Brown who's the ultimate fan of the Grammy Award-winning singer. The Godzilla: King of The Monsters star has covered many of Grande's songs throughout the years, showcasing another talent the actor has up her sleeve. In September 2018, Brown posted a cover of her singing "raindrops (an angel cried)" on her Instagram Story.

Besides the mutual respect and likes on Instagram, it refreshing to see the consistent support these two have for one another in a industry that tends to be dominated by men. Brown and Grande's exchanges show that genuine friendships in Hollywood do exist. Here's hoping there are more backstage photos, song covers, and text screenshots from the two stars in the near future.