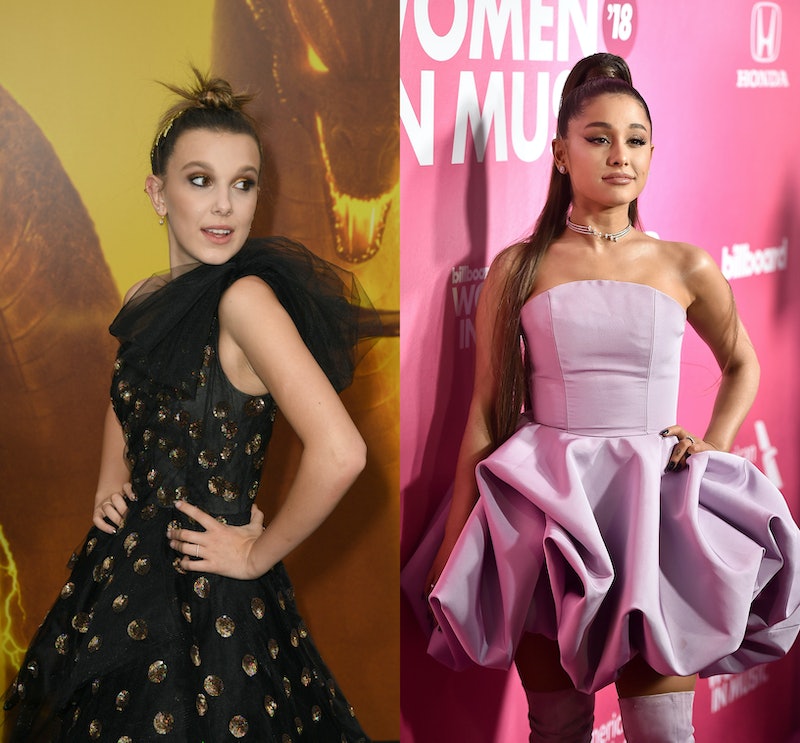 Stranger Things meets..."7 rings?" After attending one of her concerts, Millie Bobby Brown and Ariana Grande's friendship appears to be stronger than ever. Brown went to the June 14 date of Grande's Sweetner tour at Brooklyn's Barclays Center, and the pair commemorated the meet-up in a photo posted to Brown's Instagram Sunday, June 23.

The Godzilla: King of the Monsters star captioned a shot of them looking over their shoulders towards the camera, "ily sis," alongside a black heart. Grande commented, "love u the most." Fans spotted the actor at the show, and she even posted videos to her Instagram Stories of herself dancing along to some of Grande's biggest hits. On one she wrote, "like um. @arianagrande ur an actual angel and ily v much."

This isn't the first time the two stars have hung out. In February, Grande sent Brown birthday wishes on Instagram. On a post Brown shared for her 15th, the "thank u, next" singer wrote, "u have such a big heart. anybody who knows u (even just a little) is v lucky indeed. i'll jus be here loudly reminding u of that whenever u need me! hbd ily."

Brown excitedly wrote back, "thx ur the best doppelganger a girl could ask for. ilysm calling u now lol." (Honestly, we'll take the version of "in my head" with Brown in the intro any day now.)

Like any good friends, one minute Grande and Brown are celebrating each other and the next minute, they're having some fun at the other's expense. In February 2018, when Brown was dating singer Jacob Sartorius, she posted a photo the two kissing on the beach, captioned, "moonlighting w him." Grande, like any dutiful pal, hilariously chimed in by commenting, "i wasn't even allowed to leave my house til i was 20." (Why is this so relatable?)

When the famous friends aren't posing for selfies at concerts or having hilarious Insta exchanges, they text during awards shows, which is totally relatable, right? During the 2018 Golden Globes, Grande texted Brown everything you've ever wanted to hear from your best friend regarding her red carpet look. "yes," "proud," "gorgeous," "stunning," Grande wrote in a series of pep talk texts.

Some have even speculated that Brown's red carpet look for the recent Godzilla premiere was inspired by Grande's signature long ponytail. During the outing Brown sported a high, blonde ponytail that does feel reminiscent of the "break up with your girlfriend, i'm bored," singer's iconic locks. It leaves us asking, "Where was the text or Instagram reaction from Grande?"

Hopefully, in the coming months we'll get even more details about the relationship between Grande and Brown. There are several facts people want to know about this somewhat unlikely duo. I mean, when did these two know they were a match made in pop culture heaven? Does Ari watch Stranger Things? What's Millie's favorite track off of Grande's latest album?The world has questions.

While it's not totally clear where Brown and Grande struck up their friendship, it's clear that their bond was meant to last.