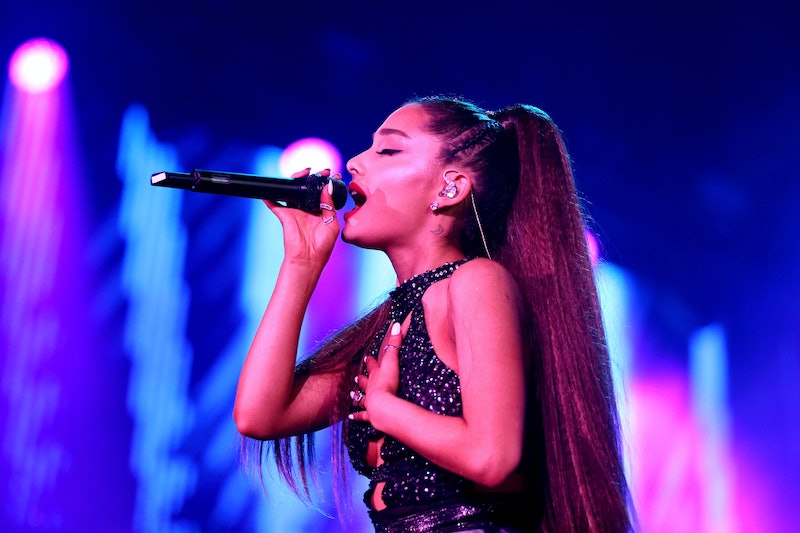 Two days before her 25th birthday, musical magician and lover of clouds Ariana Grande shared a home video from her third birthday and it is quite possibly the most suspenseful work of film to be released this year. In the clip, Ari’s mom, Joan Grande, tells the future pop star that her brother, Frankie Grande, has a present for her. Tiny Ariana braces herself for the surprise. The extremely cute video will certainly warm your tattooed heart. It will also certainly make you shake your fist at the sky and cry out, "Why, cliffhanger? Why?"

At the top of the minute-long clip, Joan asks Ariana for a birthday smile and then they say they love each other. And then, Joan asks her to close her eyes and wait for Frankie’s gift. Ari looks around before scrunching her face up. She shuts her eyes. She opens her eyes, realizes the camera caught her peeking, and covers her face with her hands. She tries to sneak a quick look through her fingers, but that will not fly. Not on Joan's watch. Ari stops trying to peek.

And then, the video starts over. We never see the surprise. We never hear the surprise. It is a cliffhanger ending that may be right up there with the final scene of The Sopranos series finale, or the Buffy the Vampire Slayer episode "The Gift." It may even be right up there with the infamous Dallas season final that asked who shot JR. Chrissy Teigen spoke for all of us when she commented on the post, "for the love of god what was the surprise!!!"

Ari couldn't remember what the surprise was, but she knows a person who would remember. About an hour after the video went up on Instagram and Twitter, she tweeted, “@joangrande what was da surprise i forgot bc it was 22 years ago."

Lucky us, Joan did not forget. We do not have to wallow in uncertainty forever. Joan said,

“Frankie got you a big Tasmanian devil weighted walker balloon, so he could sit next to you and you danced with him all day..... I've got that on video too. heehee and boy did you love the theme song from Mission Impossible... I love you almost birthday girl... xoxo."

The “No Tears Left to Cry” singer replied that she definitely remembered that balloon, and yes, she thought it was awesome, because, of course it was.

Several hours after she posted the throwback clip, Ariana teased she had a birthday surprise for her fans. “i know we’re not really doing snippets but i do wanna give u sum special for my birthday if that’s ok .... might post it tonight,” she tweeted on Monday. “i promise this’ll be the last of it.”

Uh, wait part two. Ari has something special up her sleeve for us? And she plans on sharing it the night before her 25th birthday? Honest to god, knock me out.