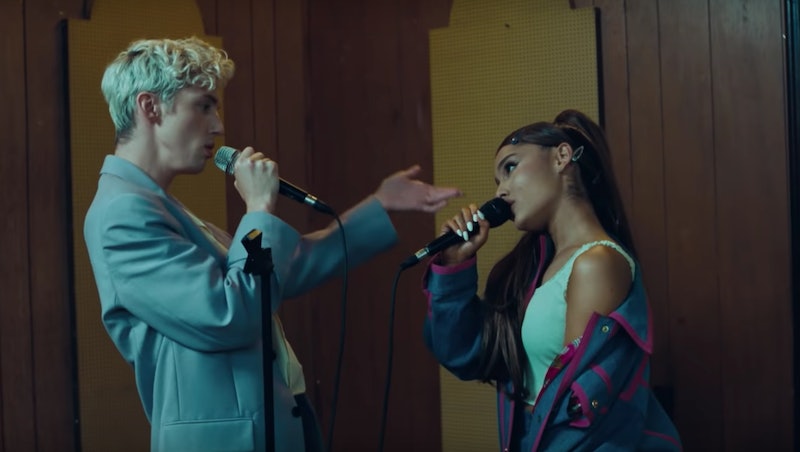 Get'cha head in the game because just like the East High Wildcats, Troye Sivan and Ariana Grande's music video is in the house. And as the "Bloom" singer noted on Twitter on Thursday, it pays homage to a very important Disney franchise: The music video for "Dance to This" by Troye Sivan featuring Ariana Grande was partially inspired by High School Musical. In that same tweet, Sivan also said the clip’s concept draws from Grease, the music video for the Knife’s “Pass It On,” and a “gif of Cher spinning around that i cant find rn.” Put all of these fantastic references together and what have you got? A bibbidi-bobbidi-beauitful music video for yet another tremendous pop jam from Sivan.

At the top of the Bardia Zeinali-directed video, Sivan takes the mic at what appears to be a bland rec room at a community center in front of a low-energy audience. Grande watches from one of the tables for about a minute and a half, and then decides it is time to join Sivan on the “stage.” As they dance between the tables, the other people in the room start to stand up out of their seats. But rather than join Sivan and Grande’s two-person dance party like anyone who knows what’s good for them would, the other people in the rec room head for the exit.

Sivan and Grande do not let the audience’s lame reactions to their electric performance harsh their mood. With the flick of a switch, the drab rec room transforms into a makeshift nightclub where Grande and Sivan dance on top of the tables and under pulsing lights for as long as they like. The rest of the folks who gathered at that rec room are not up for the dance party, but the pair of pop stars are all in this together. Well, until Sivan snaps out of his reverie, that is.

Just as Sivan said on Twitter, the video is full of elements that would fit right in any of the three High School Musical movies; he really delivered on his promise. You might even say the "Dance to This" video hit the right nooooo-oh-ohh-ohhh-oh-tes.

Oh, you better believe we're getting the HSM feels.

The HSM vibes are beyond.

It's official: Troye and Ariana are now Troy and Gabriana.

Ready to see some moments from "Dance to This" that feel like something out of the HSM franchise? Here we go.

More like this
Lindsay Lohan Just Recalled A Hilarious 'Parent Trap' Story
By Sam Ramsden
See 'Twilight' Stars Together Again For A Sweet Cullen "Family Reunion"
By Stephanie Topacio Long
The 'Kenan & Kel' Reunion On 'SNL' Took A Dramatic Turn, Thanks To Keke Palmer
By Brad Witter
Paris Hilton’s Tweet About The 2006 “Holy Trinity” Photo Will Make You Feel Old
By Marina Watts
Get Even More From Bustle — Sign Up For The Newsletter