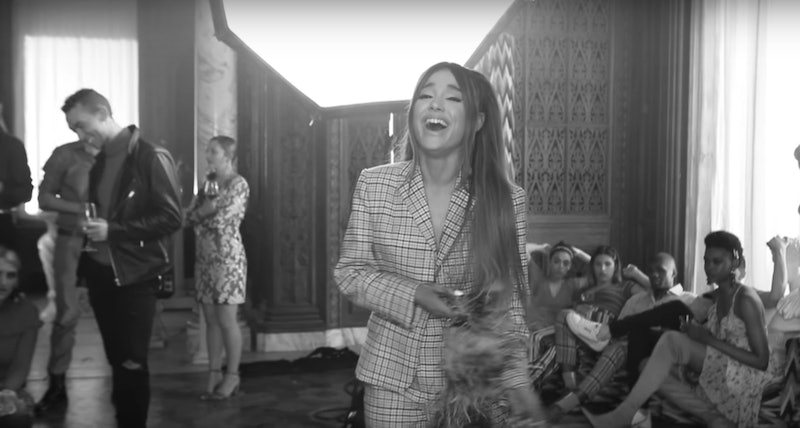 While the video itself is filled with jealousy, chaos, and some vengeful, Katniss Everdeen-style bow work, it seems like the energy on the set of Ariana Grande's new music video took on an entirely different tone. Phew, right? Can you imagine how stressful it would be to work with a legit angry, archery-abled Ariana? Ariana Grande shared behind-the-scenes "Boyfriend" footage just a few days after the video dropped, and there are so many goofy and lighthearted moments. Apparently, she was basically running on fumes during filming, which makes her silly, sleep-deprived antics totally relatable. (And given how great the results are, this confirms she's basically a superhero, right?)

So, you know that feeling you get when you're forced to stay awake way longer than your body was meant to? Maybe you had to pull an all-nighter to study for an exam, or worked a double-shift that didn't allow you much time to snooze in between. It's certainly not something you want to make a habit of, but it happens every now and again — and when it does, it can invoke a serious feeling of slap-happiness.

Well, it seems like Grande had no choice but to endure a serious case of the sleepless sillies while filming the video for her latest single, "Boyfriend." The singer posted some behind-the-scenes clips via her Instagram on August 3, and the whole thing will probably give you the giggles, too.

"This is what a fifteen hour day on one hour of sleep looks like," she captioned the footage. "Behind the scenes montage by @alfredoflores out now. swipe up on my story to peep."

The short clips that Grande posted on Instagram only gave a small glimpse into what life was like on set that day. Grande can be seen dancing around by herself with a feather boa, laughing hysterically, and telling the camera, "It's 900 degrees, and I'm starving, and I haven't slept in 2 days."

The full behind-the-scenes video that Grande linked to in her Instagram Story is even better, though. Many bottles were popped, much more funny dancing was done, and it generally seemed like everyone involved was having a blast. Even Grande's mom, Joan, stopped by the set, and was all smiles while she watched her daughter perform.

Fans also get a closer look at how all of those big brawling scenes in "Boyfriend" went down. It should come as no surprise that they definitely weren't as volatile to film as they appeared to be onscreen. In fact, Grande seemed to have a hard time keeping a straight face the entire time. Two nights without sleep will definitely do that to a person.

Throughout it all, though, Grande remained a consummate professional. She was clearly able to power through the 15-plus-hour shoot, and she ended up with a pretty killer (pun intended) music video to show for it.

Grande has never been shy about her workaholic tendencies, but hopefully she's been able to get some much-needed sleep now that she's done filming "Boyfriend." After all, a rested Grande is the best Grande — although, a slap-happy Grande is pretty great, too.