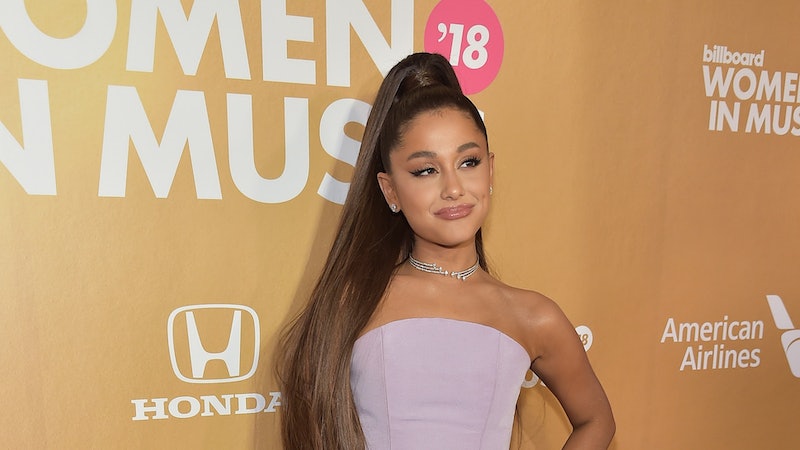 For fans who can't stop listening to Sweetener and Thank U, Next, there's never enough behind the scenes teases and tidbits to make their next listen even more entertaining. On Aug. 30, Ariana Grande shared behind the scene clips and texts from the time when she was recording her last two albums, in order to give her Arianators even more insight into how those now-classic records were made.

On Twitter and Instagram, Grande posted a video of a voice memo from the recording sessions of Sweetener, where she revealed to fans that her single, "Breathin'" originally had a more NSFW title. "So many memories cool in my voice notes," Grande captioned the video. "However.... why did we call this first take of breathin’ 'ball slapper'?" She also jokingly added the hashtags, "#professionalism" and "#songwriting" before wondering how "#wewonagrammyafterthis????"

In addition to her revelation about "Breathin,'" Grande also shared a screenshot of a text message conversation on Instagram and Twitter with songwriter and frequent collaborator, Savan Kotecha, from when she was working on Thank U, Next. "I know we have sh*t to do," Grande wrote in the texts, "but one day we should do something titled 'Break Up With Your Girlfriends, I'm Bored.'"

The singer also shared the screenshot on her Instagram Story, where she revealed that she "started and finished it" on the same that she pitched the song's title to Kotecha. "This is how songs start lol," she wrote. She also shared a rough version of "Break Up With Your Girlfriend, I'm Bored" on her Instagram Story, which she noted had "random adlibs" on the voice memo — and a clip of her goofing around before recording.

And that's not all of the behind the scenes posts that the singer has saved on her phone — in another post on her Story, Grande teased that she might turn "#VoiceNoteSeries" into a recurring thing that she'll share all over social media. "If you like these, maybe I'll share more," Grande wrote alongside a screenshot of her saved voice memos. "LMK if u like stuff like this." (She's already compiled several of her Stories into a highlight on her Instagram page, so clearly, fans are interested.)

Grande's social media posts are far from the first time that she's given fans an insight into the process of recording Thank U, Next. In December 2018, she told Billboard that the album was written in about a week, and the entire thing was recorded in just two weeks as a way to process the stress and tragedy of the year. She recently told Vogue that it was her friends' idea for her to head back into the studio so soon after releasing Sweetener, as a coping mechanism. "My friends know how much solace music brings me, so I think it was an all-around, let’s-get-her-there type situation," Grande told the magazine in July.

"I don’t really remember how it started or how it finished, or how all of a sudden there were 10 songs on the board," she continued. "I think that this is the first album and also the first year of my life where I’m realizing that I can no longer put off spending time with myself, just as me. ... So Thank U, Next was this moment of self-realization."

As for her decision to share everything with her fans — from her mental state to these new clips from the studio — Grande explained to Vogue that, "I want to be there for [my fans], so I share things that I think they'll find comfort in knowing that I go through as well." Based on the reaction to the clips she's posted on social media, it seems like there is still plenty more to Grande to share with her fans in the future.

More like this
Everything You Need To Know About ‘Black Panther: Wakanda Forever’
By Bustle Editors and Radhika Menon
Beyoncé Removes The “Milkshake” Sample From “ENERGY” After Kelis Called Her Out
By Jake Viswanath
Diane Warren Apologizes To Beyoncé For Shading The Amount Of Songwriters On “ALIEN SUPERSTAR”
By Jake Viswanath
Twitter Is Losing It Over Beyoncé's "ALIEN SUPERSTAR" & These Memes Prove It
By Radhika Menon
Get Even More From Bustle — Sign Up For The Newsletter