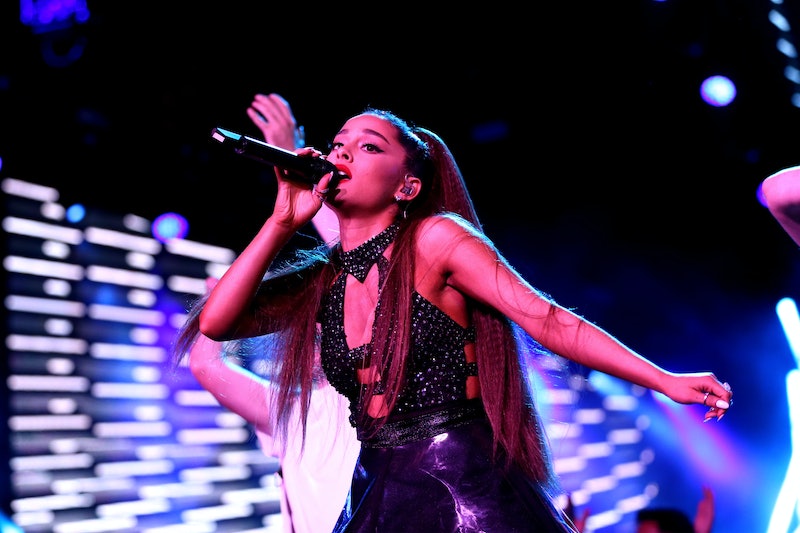 Back in November 2018, Ariana Grande famously joked about the time she sang that there were "no tears left to cry," after so many heartbreaking events had entered her orbit. But in a new interview with Vogue, the singer says those experiences including the Manchester bombing and ex Mac Miller's death, are precisely why Grande is open with her fans. However, the Thank U, Next artist says that her relationship with her fans is so strong that the things she doesn't disclose to her followers go unspoken and they can tell when she's holding back something difficult.

"I’ve been open in my art and open in my DMs and my conversations with my fans directly, and I want to be there for them, so I share things that I think they'll find comfort in knowing that I go through as well," Grande explained. She then continued by comparing the tight-knit relationship with her fans to a classic movie:

"But also there are a lot of things that I swallow on a daily basis that I don't want to share with them, because they're mine. But they know that. They can literally see it in my eyes. They know when I'm disconnected, when I'm happy, when I'm tired. It's this weird thing we have. We're like f*cking E.T. and Elliott."

One of the darkest moments Grande has had to endure along with fans, which she opened up about with the mag, was the May 2017 Manchester bombing. It happened during a stop on her Dangerous Woman tour, leaving 23 people dead. Afterwards, she solemnly tweeted, "broken. from the bottom of my heart, i am so so sorry. i don't have words."

Clearly, Grande views the event as a collective tragedy, not one that is hers alone. "It's not my trauma," Grande tearfully told Vogue. "It's those families'. It's their losses, and so it's hard to just let it all out without thinking about them reading this and reopening the memory for them."

Still, the artist was able to find some light within the darkness, returning to Manchester two weeks later to visit survivors and grieving families. Then, she put on her One Love Manchester benefit concert, which raised $25 million and employed special guests including Miley Cyrus, Justin Bieber, and Coldplay. Grande opened up about her complex feelings regarding the show:

"I'm proud that we were able to raise a lot of money with the intention of giving people a feeling of love or unity, but at the end of the day, it didn't bring anyone back. Everyone was like, 'Wow, look at this amazing thing', and I was like, What the f*ck are you guys talking about? We did the best we could, but on a totally real level we did nothing. I'm sorry. I have a lot to say that could probably help people that I do want to share, but I have a lot that I still need to process myself and will probably never be ready to talk about. For a long time I didn't want to talk to anyone about anything, because I didn't want to think about anything. I kind of just wanted to bury myself in work and not focus on the real stuff, because I couldn’t believe it was real."

A year after Manchester, Grande tweeted a tribute to the victims, "thinking of you all today and every day I love you with all of me and am sending you all of the light and warmth I have to offer on this challenging day."

Clearly, the Arianators are bonded by emotions that are near and dear to Grande's heart, as she shares her life with her closest fans.

More like this
Ariana Grande & Kristin Chenoweth Sing A Wizard Of Oz Classic On TikTok
By Alyssa Lapid
Jennifer Coolidge Slid Into Ariana Grande’s DMs In The Most Iconic Way
By El Hunt
Meghan Trainor & Daryl Sabara Are Expecting Their Second Baby
By Jake Viswanath
Adam Levine & Behati Prinsloo Welcome Their Third Child Together
By Jake Viswanath
Get Even More From Bustle — Sign Up For The Newsletter
From hair trends to relationship advice, our daily newsletter has everything you need to sound like a person who’s on TikTok, even if you aren’t.