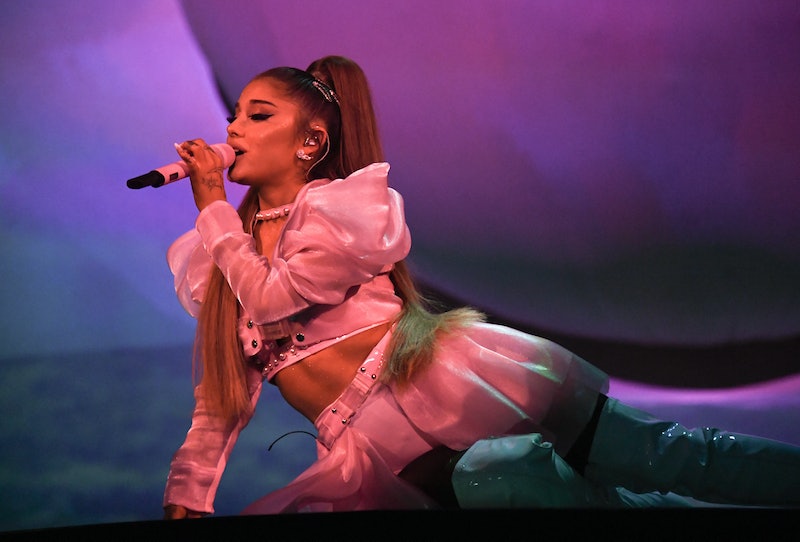 If you've been looking for the perfect female-centric soundtrack to kick butt to, Ariana Grande created the album for exactly that. Two weeks ahead of the highly anticipated reboot's premiere, Grande's Charlie's Angels soundtrack has been released and the lineup features plenty of girl-power collaborations to get fans excited for the upcoming film. Grande produced the soundtrack — which features five brand-new songs from the singer herself — alongside frequent collaborators Savan Kotecha and Ilya Salmanzadeh.

In addition to her team-up with Miley Cyrus and Lana del Rey "Don't Call Me Angel," Grande appears on "Bad To You" alongside Nicki Minaj and Normani, and "Nobody" with legendary singer Chaka Khan. For her fourth collaboration on the album, Grande recruited her good friend Victoria Monét for "Got Her Own," which seems like an homage to Destiny's Child's 2001 track "Independent Women Pt. 1" from the soundtrack to the previous Charlie's Angels reboot.

"He might got money, but I bet she got her own / You know she independent, when she leave here all alone / You already know," Grande and Monét sing in the chorus of "Got Her Own," making it a new empowerment anthem for women everywhere. Things take a sultrier turn on Grande's solo song "How I Look On You," which would be right at home on either of her previous albums thanks to its lyrics about Grande making a "cute headline" by stepping out with a new love interest.

"[I'm] excited and honored to have so many phenomenal, bad ass mf women involved in this incredibly special project," Grande wrote on Instagram on Oct. 11, while teasing the release of the soundtrack. Describing the vibe of the album as "poppy, mildly trappy at times" and "action filled," the singer explained that getting the chance to work on the Charlie's Angels soundtrack was a dream for her. "This has been such a unique and exciting experience for me and i’m so excited to see it and scream whenever i hear all my friends’ voices."

In September, Charlie's Angels director Elizabeth Banks told Entertainment Tonight that she was inspired to have Grande curate and produce the soundtrack after hearing Kendrick Lamar's Grammy-nominated work for Black Panther. "Ariana Grande came in really early on to executive produce the soundtrack for the movie," Banks explained. "I was really obsessed with the Black Panther soundtrack, and how one artist sort of took over and really represented not just the theme of the movie but the audience for the movie."

Explaining that Grande is a big fan of the Charlie's Angels franchise, Banks added that the singer was a "dream" to work with, and even recruited her "Don't Call Me Angel" collaborators herself. "She's friends with Miley. Miley came in pretty quickly on that song, and that song was one of the first things we heard from the album producers and we loved it," Banks told the outlet.

Thanks to Grande's famous friends and — more importantly — her decision to keep women at the forefront of the girl-power tracks, it sounds like the singer found the best way to soundtrack a Charlie's Angels movie for 2019.