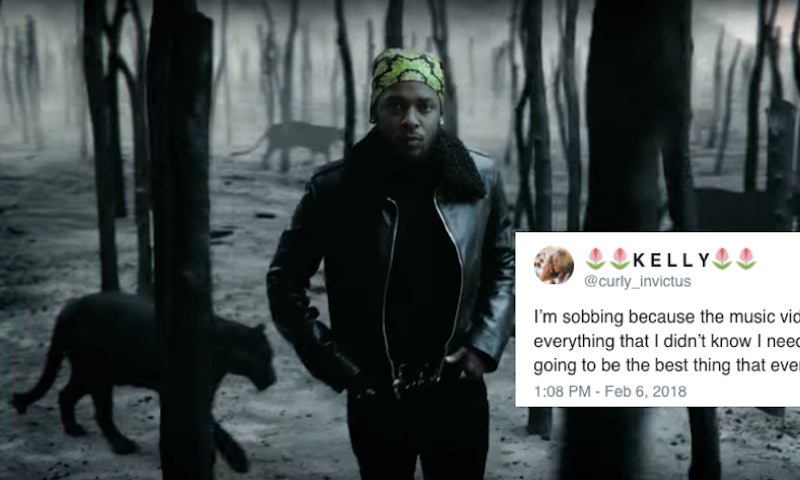 As excitement for the forthcoming release of Marvel's Black Panther continues to mount, Kendrick Lamar and SZA's "All The Stars" video has quickly turned into an obsession for all of the fans anxiously awaiting the film's upcoming Feb. 16 debut. The visual, which was directed by Dave Meyers and The Little Homies (aka Lamar and Dave Free), features the rapper alongside Grammy-nominated singer SZA in a stunning showcase of black pride and excellence that immediately captivates its audience.

The video's varying themes, which are masterfully pieced together, notably and unapologetically pay homage to the beautiful tapestry of African culture. In the breathtaking clip, Lamar is seen sitting amid a small village of people, who are all brightly dressed for the gathering. He's also depicted navigating a forest with a large group of panthers in tow, and later walks a maze of beautiful queens donning gold crowns. Meanwhile, SZA is shown belting out her lyrics to the song while being flocked by her own squad of colorfully clothed dancers.

With Black History Month officially getting underway just days ago, the artistry of "All The Stars" serves as an ultimate celebration of black artistry and culture that should not be missed.

Many took to Twitter upon the visual's release on Tuesday, Feb. 6 to share their thoughts on the brilliance of "All The Stars" cultural excellence. To say that fans were blown away would be an understatement.

Calling the video out as one of the "greatest music videos ever," this fan gives "All The Stars" their approval.

This fan was head over heels about the visual's display of "black girl magic."

Another viewer couldn't get over the aesthetics of the video's opening scene.

This fan pulled a few of the video's most memorable moments.

This Twitter user pointed out the authentic beauty of the video.

The visual brought another viewer to tears.

Someone felt totally moved by the beauty of "All The Stars."

Amazed by its artistry, this viewer gushed about the video's greatness.

This fan had no words left.

Lamar was notably handpicked to curate the soon-to-be released Black Panther soundtrack by the film's director and writer Ryan Coogler. Coogler explained his excitement about the musical collaboration during a statement for the album's announcement, sharing:

Serving as the project's co-producer along in collaboration with Top Dawg Entertainment president Anthony "Top Dawg" Tiffith, Lamar explained his feelings about the partnership in a press release:

“Marvel Studios’ Black Panther is amazing, from its cast to its director. The magnitude of this film showcases a great marriage of art and culture. I'm truly honored to contribute my knowledge of producing sound and writing music alongside Ryan and Marvel's vision."

TDE also expressed their thoughts on the groundbreaking film, adding:

"Working on such a powerful movie is a great opportunity. We're always working on new goals at TDE, so teaming up with Disney, Marvel Studios and the Black Panther film makes perfect sense."

As one of the most highly anticipated films of the year, Black Panther (executive producer: Victoria Alonso) — along with its accompanying soundtrack — has become one of the most talked about projects of 2018. Although not set to debut for another 10 days, the cinematic feature has already managed to outpace all superhero movies in advance ticket sales, according to Variety.

The soundtrack, which is due to be released on Feb. 9, and the accompanying video for the "All The Stars" just make the project that much more exciting.