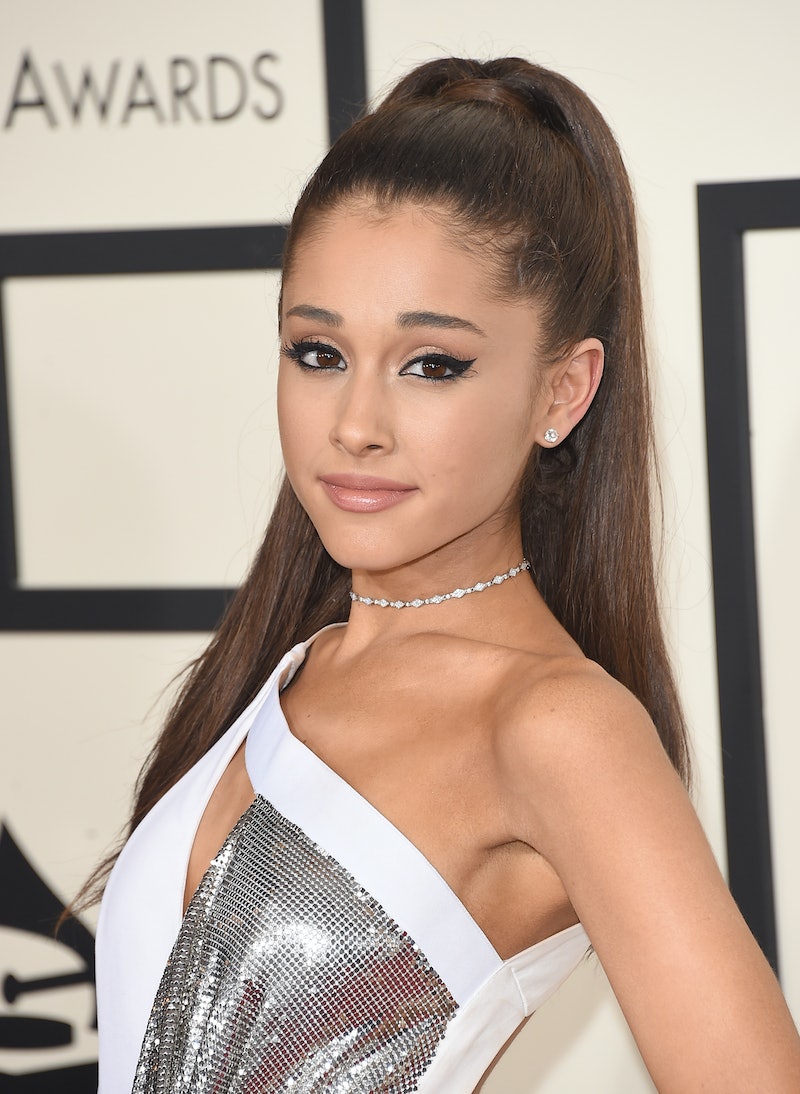 Now this right here is a good idea: Ariana Grande is on the cover of Vogue US for her first time ever this month — but it's her little dog Toulouse who really stole the show. As Grande put it in her Instagram caption about the feature: "thanks for allowing me to be in the background of toulouse’s first Vogue cover." Between the pup, the massive hat, and the singer's natural curls making an appearance, this just might be one of the best pics we've ever seen of the singer.

This isn't Grande's first Vogue ever — she made waves in 2018 after appearing on Vogue UK with her hair down and almost no makeup — but it is her first time on the U.S. edition of the publication. Clearly, she loves to switch things up for the mag, since her signature ponytail is missing yet again for this beachy pic. (The hat it's hidden under is by Eric Javits, paired with an as-summery-as-an-LBD-can-get dress by Dior and an Ana Khouri ear cuff.) Many Instagram commenters are already singing their praises for the look, with some noting that they've never seen the star looking quite like this ever before.

While our girl Grande looks great, we have to get back to the real star of the shoot: Toulouse, whose last name was revealed to be Lautrec in the aforementioned Vogue UK piece. Grande adopted the chihuahua-beagle mix in 2013, and he's become something of a star in his own right (as celebrity pets are wont to do). Before this cover, Toulouse appeared in several of Grande's music videos, including "7 Rings," where he made an unplanned cameo, according to the star.

Toulouse isn't the only family member to make the cut for the Vogue shoot either: Grande's mother, Joan, and grandmother, Marjorie, also appear in a precious group shot you can peep in the online version of the cover story.

All the family members (canine and human) in the photos represent the strong support system Grande has had throughout an extremely rough couple of years — which she briefly touches on with Rob Haskell, the author of the piece. But in true Grande fashion, her quotes are largely about about much she loves her fans. In commenting on past criticism of her personal style (namely, "her uniform of bubblegum lampshade dresses and thigh-high boots," as Haskell writes, that's quite different from the all-black ensemble she wears on the cover) Grande says, "I like having my funny character that I play that feels like this exaggerated version of myself. It protects me. But also I love disrupting it for the sake of my fans and making clear that I’m a person—because that’s something I enjoy fighting for." She later adds, "The music is very personal and very real, but yes, if you can be me for Halloween, if drag queens can dress up as me, then I’m a character. Go to your local drag bar, and you’ll see it. That’s, like, the best thing that’s ever happened to me. It’s better than winning a Grammy.”

And for fans of the star, this Toulouse-centric cover is probably the best gift Grande could right back.

More like this
Ariana Grande Just Wore The Chunkiest Knit Sweater I've Ever Seen
By Dominique Norman
Jennifer Coolidge Slid Into Ariana Grande’s DMs In The Most Iconic Way
By El Hunt
30 Of Kendall Jenner’s Best Runway Looks To Date
By Dominique Norman
Looking Back At Kylie Jenner's Best Fashion Week Looks
By Allie Fasanella
Get Even More From Bustle — Sign Up For The Newsletter
From hair trends to relationship advice, our daily newsletter has everything you need to sound like a person who’s on TikTok, even if you aren’t.