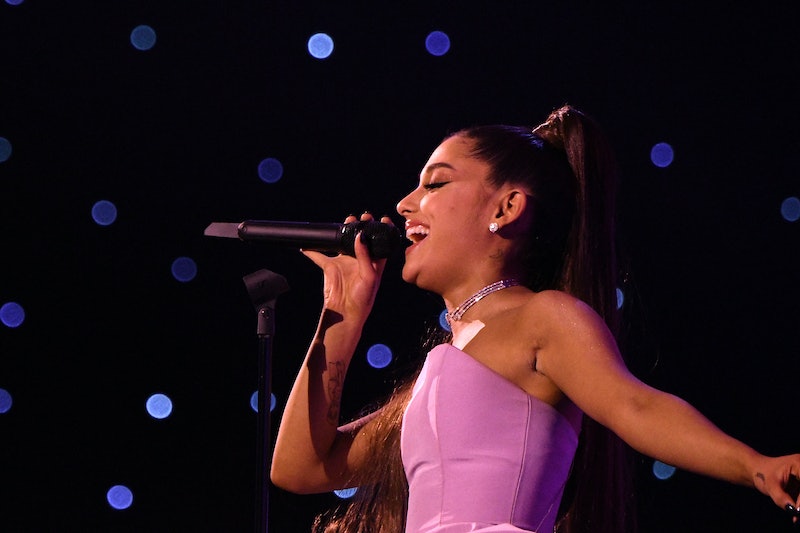 March 8 is International Women's Day, and celebrities are marking the occasion in their own ways. For Ariana Grande, that includes celebrating all women, and making sure they feel included. Ariana Grande's International Women's Day video is a throwback clip that reclaims some of the insults typically thrown at women. And her caption shows that she wants everyone to feel welcome.

Grande shared the minute-long video interlude that was made for her Dangerous Woman tour. The title of the video is "female," but Grande's tweet makes it clear that she wants anyone and everyone to feel included, too. She wrote in her tweet,

"we made this for the dwt and you've been asking for it since 🖤 happy international women's day every day to women of every color, shape, size, sexuality, age, religion, trans, cis, and all who identify ! u are everything and i'm proud of u everyday. female by @HANNAHLUXDAVIS"

The video features words and phrases like "ladylike" and "irreverent" atop a video of the pop star dancing. Some of the words are positive, like "empowered" and "strong," while phrases like "not asking for it" remind viewers that how we talk about women matters tremendously.

Grande continued the message of inclusivity in her other tweets on Friday, too. "Just a reminder u aren't celebrating women today or ever unless u including all kindsa women but wbk," the pop star tweeted. "It ain't feminism if it ain't intersectional," Grande wrote in another tweet.

Grande's International Women's Day video might also remind fans of Little Mix's "Strip" video, in which the band wrote some of the negative words that had been said about them onto their bodies. Grande defended the Little Mix video during a Twitter argument with Piers Morgan, sharing her support for the band's nudity in the video. "Women can be sexual AND talented. naked and dignified. it' OUR choice," Grande tweeted at the time. That also matches the theme of her IWD video.

Based on the responses to Grande's tweet, it looks like fans are loving the clip, along with her International Women's Day message. "I love this so much happy international women's day," one fan tweeted. "Thank you for being such an inspiring role model and an amazing ally," another responded to the video. "Thank u for being so inspirational and being someone so many people can look up to," someone else tweeted.

The first International Women's Day was in 1911, almost 100 years ago, according to the U.N. The day is meant to celebrate women's accomplishments and to promote equality for all women, across the globe. This year's International Women's Day theme is #BalanceforBetter, encouraging gender equality worldwide. The movement may have been around for decades. But there's still plenty of progress to be made, especially in terms of equal treatment and pay for women of color.

Grande has faced claims of cultural appropriation in the past, but her International Women's Day tweets suggest that she's willing to learn from her mistakes and make sure she's promoting radical inclusivity. And as for "feminism" that doesn't include all women in the conversation? Thank u, next.

More like this
Everything To Know About 'RHONJ' Season 13
By Brad Witter and Jake Viswanath
Armie Hammer's Exes Share His Alleged Voice Messages About Cannibalism & Abuse
By Grace Wehniainen
21 Photos Of Ben Affleck Holding Coffee, Cigarettes, Or J.Lo’s Hand
By Marina Watts
Lauv Is No Stranger To Taylor Swift, Drake, Ed Sheeran, & Fame
By Alyssa Lapid
Get Even More From Bustle — Sign Up For The Newsletter