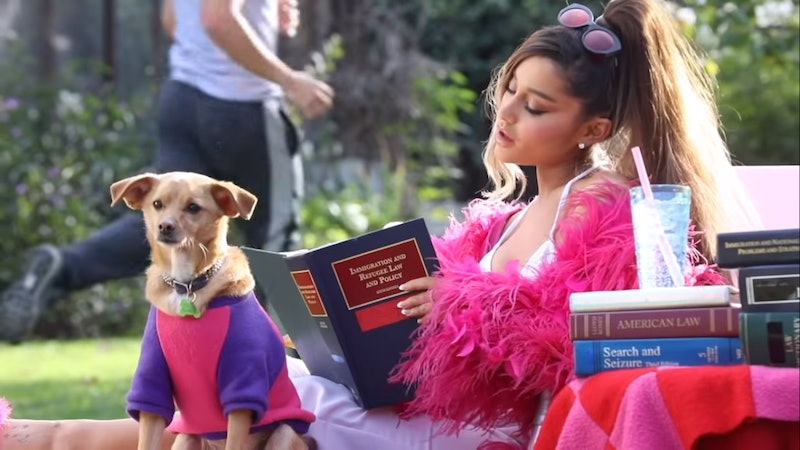 It turns out that Ariana Grande's music video for "Thank U, Next" isn't just amazing because of the odes to some of the best movies of all time. In addition to reenactments from Mean Girls and Legally Blonde alike, Grande's "Thank U, Next" video featured a subtle political message, as fans pointed out on Twitter, that would definitely make Elle Woods proud.

On Nov. 29, Grande released a behind-the-scenes sneak peek for her upcoming "Thank U, Next" music video. In the preview, Arianators were treated to some fun clips, in which the singer embodied characters from so many classic romantic comedies, including Elle from Legally Blonde. In one particular scene previewed in the video, Grande can be seen reading a textbook on her school's lawn, just as Reese Witherspoon's character did in the 2001 movie.

Interestingly enough, the specific textbook that Grande's reading has a blink-and-you'll-miss-it political message that's incredibly pertinent in today's political landscape. She can be seen reading an Immigration and Refugee Law and Policy casebook, ostensibly showing support for those seeking refuge in the U.S.

In light of the Trump administration's continued trend toward controversial immigration policies, it's an especially important and meaningful message for Grande to highlight even subtly. Many of her fans appreciated the sentiment, as they revealed on Twitter.

One Ariantor wrote that Grande is a "WOKE QUEEN" for studying immigration and refugee law, and they're definitely not wrong there.

Another fan said that the move was simply iconic on Grande's part. No lies detected there.

This fan didn't have to say much to get their point across. They posted a screenshot from the "Thank U, Next" behind-the-scene video and zoomed in on the particular textbook Grande was reading.

As if it wasn't fun enough to see all of the Arianators' responses to her subtle move, her message even got the attention of an actual law school professor. Anthony Michael Kreis, a law professor at Chicago-Kent College, highlighted Grande's choice of literature on Twitter and said:

Considering how outspoken Grande has been on certain political issues, it's actually no surprise that she would include this kind of message in her music video. In July, during an interview with ELLE, she explained exactly why she believes it necessary to voice her opinions on certain political issues, some of which being being that she is pro-Black Lives Matter and anti-Trump. She said, when asked if this outspokenness has opened herself up to criticism:

"Of course! There’s a lot of noise when you say anything about anything. But if I’m not going to say it, what’s the f*cking point of being here? Not everyone is going to agree with you, but that doesn’t mean I’m just going to shut up and sing my songs. I’m also going to be a human being who cares about other human beings; to be an ally and use my privilege to help educate people."

The full music video for "Thank U, Next," featuring the aforementioned political message, is set to be released on Nov. 30. So, Arianators should keep their eyes peeled for both that meaningful inclusion and any other fun movie moments.