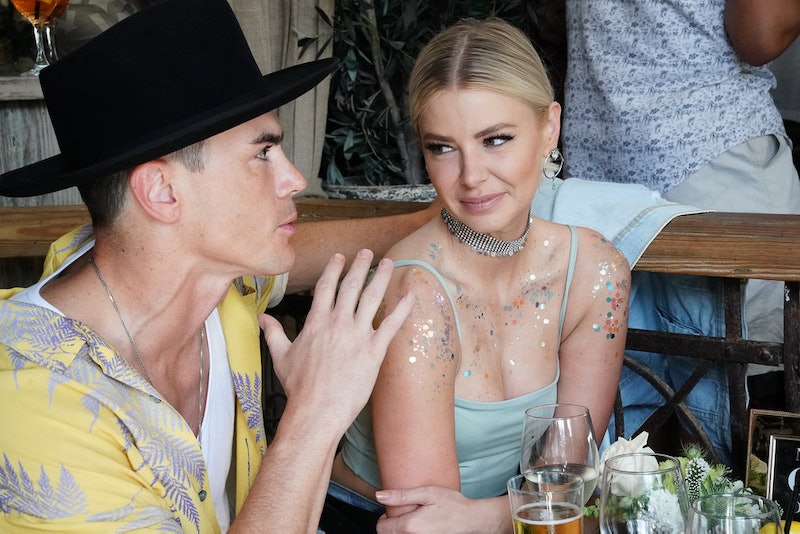 Ariana and Tom are, at least comparatively speaking, the most stable couple on Vanderpump Rules, which is why it's so hard to see them fight. It doesn't happen very often, but when these two disagree, they really disagree. And as Ariana and Tom's fight on Vanderpump Rules shows, they have some issues to work out if they want to last long-term.

While it's easy to ignore red flags in a relationship, your friends will always be around to point them out to you, and that's exactly what Tom's do. They see that, despite how much he and Ariana love each other, their priorities aren't the same, family-wise. And while it's perfectly OK to have different expectations, Tom and Ariana seem to be playing chicken with their future.

There is another issue at play in their relationship, too: Tom doesn't seem to respect Ariana's wishes or self-agency. Elsewhere in the Jan. 28 episode, Tom tells Jax and his other friends that Ariana and Lala once drunkenly hooked up in the back of his car. This was not Tom's story to share, and both Lala and Ariana are upset with him for violating their privacy just to seem cool in front of the boys. Ariana's sexuality is her own business, but Tom doesn't seem to think that outing her — not only to his friends, but on camera — is a big deal.

This "I didn’t think it was a big deal" thing has happened before, like the time Tom forced his way into being a part of Ariana's cocktail book. But as Ariana tells Tom, a person's sexuality is their own to talk about (or not), and he doesn't have any authority to comment on hers. There's a tidbit in there about how Tom wasn't cool with their hookup, but this isn't an issue of fidelity — it's an issue of Tom airing out Ariana's private life without her consent.

Unfortunately, after some explanation from Ariana, Tom doesn't really seem to get why it was wrong of him to share these things. This is almost a bigger red flag, because if he can't respect Ariana's wishes to keep certain things private, what's going to happen when they have to make huge decisions together, like buying houses and raising kids? Granted, we don't see the entirety of their conversation, but the fight doesn't appear to be entirely resolved, even though they ultimately make up.

Tom often seems like the most empathetic guy in the Vanderpump Rules cast, but in reality, he steamrolls over his girlfriend like the rest of them do. He and Ariana love each other, but sometimes that's not enough. Tom needs to work on respecting Ariana's boundaries, from talking about her sex life to talking about how she doesn't want to have kids. It's only then that they might have a shot at making their relationship last.

More like this
'Grey's Anatomy's New Intern Got Advice From Dr. Bailey Herself
By Grace Wehniainen
Paul Mescal, Man Of Mystery
By Samantha Leach and Heather Hazzan
Morfydd Clark Is On A Quest Of Her Own
By Olivia-Anne Cleary
Nicola Coughlan’s Description Of Meeting Olivia Colman Is Just So Nicola Coughlan
By Sam Ramsden
Get Even More From Bustle — Sign Up For The Newsletter