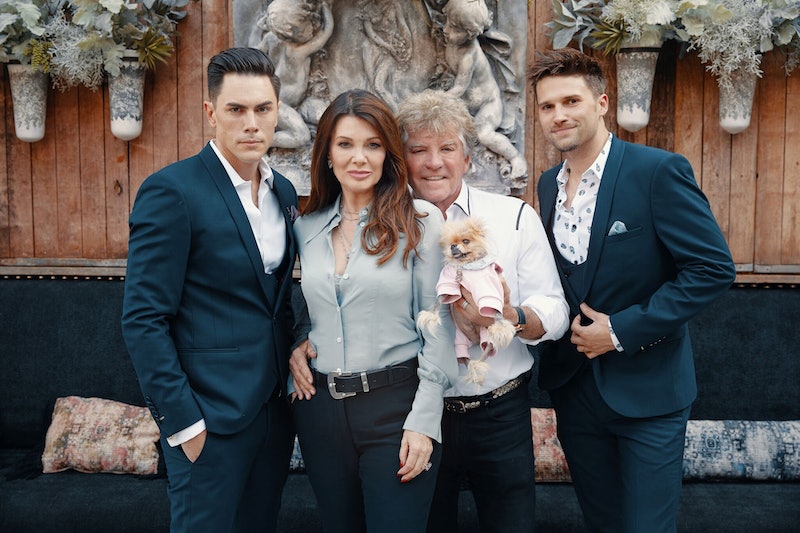 It's finally all happening: Lisa Vanderpump, Ken Todd, Tom Sandoval, and Tom Schwartz's bar will open its doors to the public on Thursday, Aug. 9. And when you visit, you will want to keep your Sexy Unique Eyeballs peeled. For there are quite a few Vanderpump Rules references around Tom Tom. When Bustle attended the Tom Tom tasting event on Monday, Aug. 6, we had a chance to sample original cocktails and dishes from the limited menu (there will be more to come once the place officially opens), admire designer Nick Alain’s exquisite work (the clock behind the bar really is a stunner), and, of course, try to find any and all allusions to one of the greatest reality TV programs of all time.

The East-SUR eggs are abundant, and the Pump is all around. Let’s start with the obvious ones: There is a cocktail called the Tom Fashioned, which, like the bar, is named after the Toms Sandoval and Schwartz. And Lisa’s Vegan Rigatoni is, of course, named after the Beverly Hills Housewife who rules Vanderpump Rules. (You might even say the dish is about the pasta.) And we are only getting warmed up.

In the mood for some seafood and/or a portmanteau that mashes up Vanderpump Rules and Forrest Gump? There is a dish called Bubbapump Shrimp Jicama Tacos. If you’re not zen anymore, à la Scheana Marie on her wedding day, Tom Tom has just the thing for you: the Zen Chicken Salad.

Is whiskey your jam? Why not give the bourbon cocktail that pays homage to the phrase LVP uttered after she heard a rumor about Brittany Cartwright and Kristen Doute back in Season 5 a go? Take a look at the menu. You'll know it when you see it.

Thanks to legend-SUR-y moments like the Taco Bell tower at Katie Maloney’s bridal shower, the cast’s frequent hangover-driven Taco Bell feasts, and Jax Taylor’s backwards Taco Bell sweatshirt, the fast-food restaurant is basically a character on Pump Rules. Which brings us to the Crunchy Chicken Wrap at Tom Tom.

When Bustle chatted with Sandoval and Schwartz at the Tom Tom preview, they revealed they thought outside the bun when putting together the restaurant’s menu. “I don’t know about you guys, but I’m a big Taco Bell fan,” Sandoval tells Bustle. “I love Crunchwrap Supremes. I wanted to do a gourmet Crunchwrap Supreme and it happened and it’s amazing.”

Sandoval and Schwartz wanted a Tom Tom-ified version of the Taco Bell wrap, and thanks to Chef Penny Davidi, that dream became a reality. “Penny is one of the best chefs I’ve ever seen and she is just amazing,” says Sandoval.

When you first walk into Tom Tom, you will see Alain’s custom chandeliers. You will be mesmerized by the aforementioned clock. You may even be greeted by a dense cloud of fog generated by the bar’s dry ice machine. And you will certainly notice a framed photograph of the Toms smooching up on the wall.

This photograph, which was taken during Season 5 while the cast played spin the bottle at Schwartz and Katie’s bachelor and bachelorette party, has been turned into a piece of wall art.