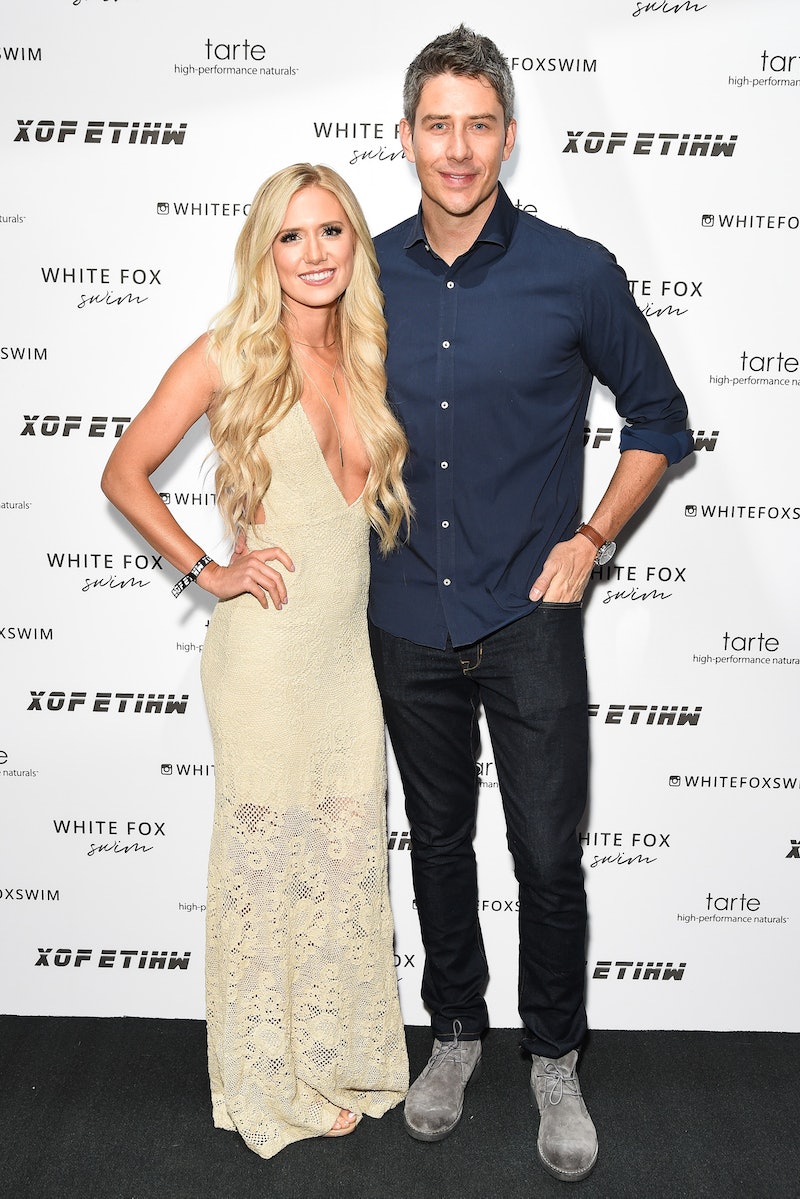 Even though The Bachelor alums Lauren and Arie Luyendyk's daughter Alessi was only born on May 29, she's already keeping busy and hitting some fun milestones. Recently Arie and Lauren took Alessi hiking for the first time and documented the adventure on Instagram.

The new parents posted similar photos on July 14 with their family of three posing after their hike. Arie captioned his photo, "First hike with @alessiluyendyk. We kept it short but it was so fun to have her in the carrier for the first time." Meanwhile, Lauren told her followers that they were "teaching @alessiluyendyk to love the outdoors from the verrrry beginning." And she's not wrong — she really is starting at the very beginning.

Some of Lauren's followers had positive feedback about the family day in the woods. One person wrote, "Such a cute little fam! I commend you for braving a hike with a little baby!" However, there were some critics. A different Instagram user wrote, "Please make sure sweet baby Alessi is being carried on the chest and not too down low!" Another wrote, "The only thing I would worry about is the heat," as if anyone asked for her opinion.

At least there were a lot of commenters telling the Luyendyks to brush off the criticism. One follower wrote, "I hope you don't get upset from reading the comments."

Even though Alessi is so young, she's far from a homebody. She and her parents have been enjoying their summer out and about. Unfortunately, the Luyendyks have received some parenting criticism for this. In June, Arie shared a photo of the family out for dinner.

As per usual, Instagram users had a lot to say. One person wrote, "You are already taking the baby out in public? just saying kinda risky health wise. Happy first Father's Day Arie!" At least it ended on a positive note, right? Another person added, "I love you guys and I don't want to judge, but I would personally not bring a newborn out of the house!" Yikes.

So many people seem to have opinions about the parenting ability of strangers. When Lauren went out for the first time alone since having her daughter, to hang out with her sister, commenters had a field day with that too. She gets criticized for bringing her daughter out with her and for leaving her at home. You just can't win with the social media trolls.

According to People, Arie commented on that photo with a message for the haters. The new dad wrote, "To all the negative comments regarding leaving her with grandma for a 45min lunch, cut her some slack!”

Alessi is Arie and Lauren's daughter, so they're the people making the parenting decisions, not their social media followers. And part of their family's routine includes spending time together outdoors. On July 6, Lauren shared a photo holding little Alessi in the pool.

Just the day before, Lauren posted photos from Alessi's first Fourth of July with family and friends. And, yes, she was outside of the house again, living her best life.

There are a lot of people who saw the photos from Alessi's first hike and smiled from the cuteness. Unfortunately, there were other people who chose to nitpick and comment on a stranger's picture. Hopefully, the Luyendyks can block out the latter and focus on their next family adventure.

More like this
Brianna Revealed Why 'The Bachelor' Premiere Was Tougher For Her Than You Saw On TV
By Brad Witter
'Bachelorette' Vet Clare Crawley Unveiled 2 Special Wedding Day Accessories
By Stephanie Topacio Long
Hannah Ann Got Engaged 3 Years After 'The Bachelor' & The Proposal Was Dreamy
By Grace Wehniainen
10 Photos Of The Wildest Limo Arrivals From 'The Bachelor' Premiere
By Brad Witter
Get Even More From Bustle — Sign Up For The Newsletter
From hair trends to relationship advice, our daily newsletter has everything you need to sound like a person who’s on TikTok, even if you aren’t.