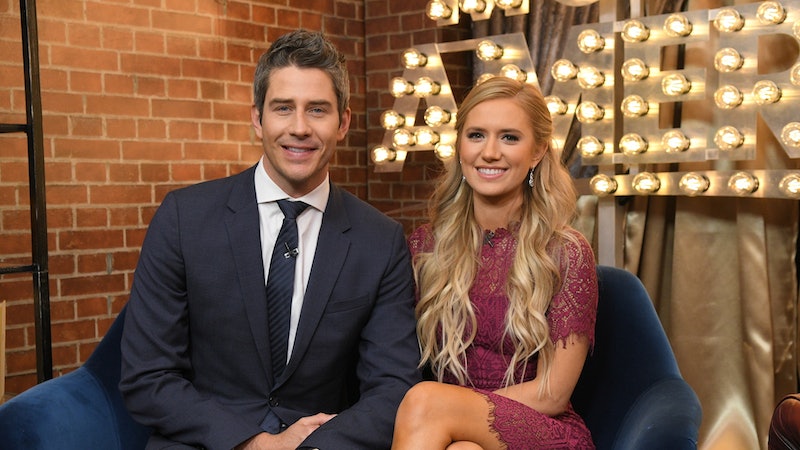 Newly married Arie and Lauren Luyendyk met during his season of The Bachelor. Now their newborn daughter is following in their footsteps. Well, she sort of is. Arie and Lauren's new photos of baby Alessi show she already fits right in with Bachelor Nation. Of course, this is a given, since she is Bachelor offspring — that's an automatic in. But Alessi is also getting into the franchise in her own way, even though she was just born on May 30.

It obviously seems way too soon to realistically wonder if Alessi will become a contestant on The Bachelor. However, it might actually be too late, believe it or not. She already skipped past the whole contestant thing and just became the lead in her own right. No, she's not filming a reality TV show with her newborn social circle, but she's already living that Bachelorette lifestyle at just a couple weeks old.

Alessi went on her first "group date," a staple of the Bachelor franchise courting process. On June 11, Lauren posted photos of her daughter hanging out with two boy babies. She hilariously captioned the Instagram photo, "Already on a group date and @ariejr is freaking out."

The two boys are even somewhat reminiscent of the current Bachelorette guys with the matching outfits. Is the black-and-white striped onesie the new salmon blazer of The Bachelorette? According to the new generation, it just might be.

Not only is it a group date, but it is actually a two-on-one situation, which is by far the most-loathed date on The Bachelorette and The Bachelor. Whoever posts from Alessi's account even commented about forgoing a two-on-one date in favor of a nap. Not a bad idea.

The cutest group "group date" in Bachelorette history was even documented in Alessi's own Instagram Story. However, she seemed to be over it since she was yawning in her second post. No roses for these boys, at least not at this point.

Arie joined the Luyendyk ladies to share his own commentary on the "date." Apparently he doesn't want her dating until she's 25. Coincidentally, Lauren was 25 when she filmed Arie's season of The Bachelor. Maybe Alessi will follow her mom's path and find love on reality television.

Even if Alessi never goes on the show, she's definitely watching it already, or at least it's on in the background during her naps and feedings. She even dressed in theme to watch the June 11 episode of Hannah Brown's Bachelorette season. Alessi wore a onesie that said, "Started with a [rose] now we’re here," while the episode was on.

How fitting! Arie and Lauren met while he was handing out roses during his season of The Bachelor. They got engaged during the After the Final Rose episode in March 2018. Lauren and Arie announced they were expecting their first child back in November 2018. This meant that little Alessi was (sort of) around for her parents January 2019 wedding, since she was born a few months later.

And now it all comes full circle less than two weeks later with the infant getting in some group date practice sessions, thanks to her new friends.