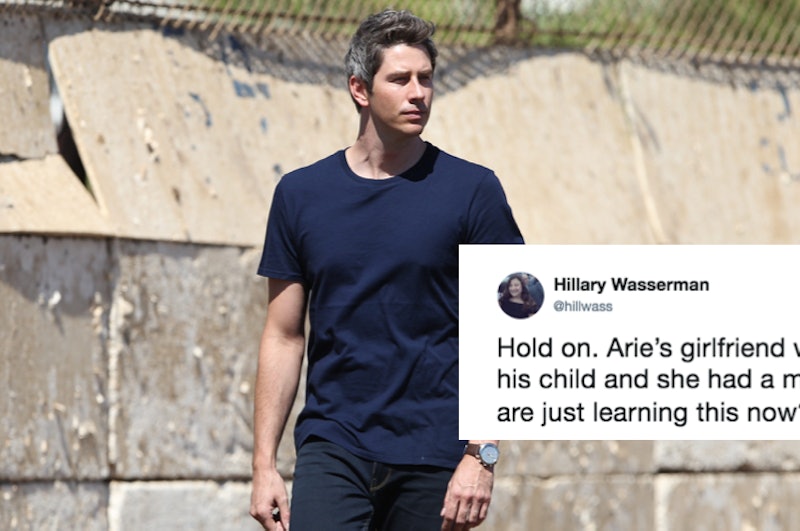 On The Bachelor, one-on-one dates are meant for those private, intimate conversations where the Bachelor and a contestant finally get to open up to each other in a way that never feels appropriate during cocktail parties. And on Monday night, did that ever happen. During his date with Lauren B., Arie revealed that he and his ex almost had a baby. Unsurprisingly, Twitter can't stop talking about that moment in the show.

To be honest, it was definitely the biggest moment from their date. Their relatively quiet stroll through Paris was sweet and pretty but not that exciting, and neither was a lot of their other dinner conversation. But then, they finally broke the ice and started talking about real stuff, including their past relationships, and Arie ended up divulging some pretty personal details about his ex.

Just like the fans watching at home, Lauren was shocked to find out that Arie had been in a previous relationship where his serious girlfriend was pregnant, but had lost the baby, and unfortunately, that situation led to their split. Through that experience, Arie realized how important having kids in the future really is to him, and it's affected the way he has approached relationships since then.

Of course, Twitter lit up as fans tried to process this moment, and the reactions have ranged from totally shocked to seeing this as an opportunity for Bachelor-related humor... especially since the rest of their night together was so low key. Honestly, though, joking about something so serious is kinda rude.

In any case, some fans were completely blindsided by the news, much like Lauren was:

Some people were just questioning Lauren's reaction... or, more like they were agreeing with her because it's not like anyone could really swallow such a big bombshell coming from Arie so unexpectedly.

And another was shocked that Arie has been part of the Bachelor franchise this long and somehow, no one had discovered this major part of his past until now. Honestly, it is kind of hard to believe, especially with how fast we've seen word travel across Bachelor nation.

And others took the opportunity to talk about how they weren't impressed with Arie's telling of the story, or the way he said he reacted to finding out that his girlfriend had miscarried a baby:

Considering the fact that this was Arie and Lauren's first legitimate date, that's a very heavy conversation for them to have. But when The Bachelor is as fast paced as it is — and engagement is right around the corner — these conversations need to be had. At least now, Lauren and Arie have managed to forge a connection they didn't have before, which is definitely progress for them. Arie started the date worried that he and Lauren wouldn't be able to open up with each other, but by the end of the night, that obviously wasn't an issue.

And the fact that Arie felt comfortable sharing such a big, personal part of his life with Lauren is obviously huge. He's had other dates this season, but this is the first time he's ever gotten this deep with a contestant. It'll be interesting to see if this ends up giving their relationship an even bigger push than a normal one-on-one date would have, and she did leave with that date rose.

Maybe this is a sign Lauren's here to stay? Guess we'll just have to keep watching to find out.