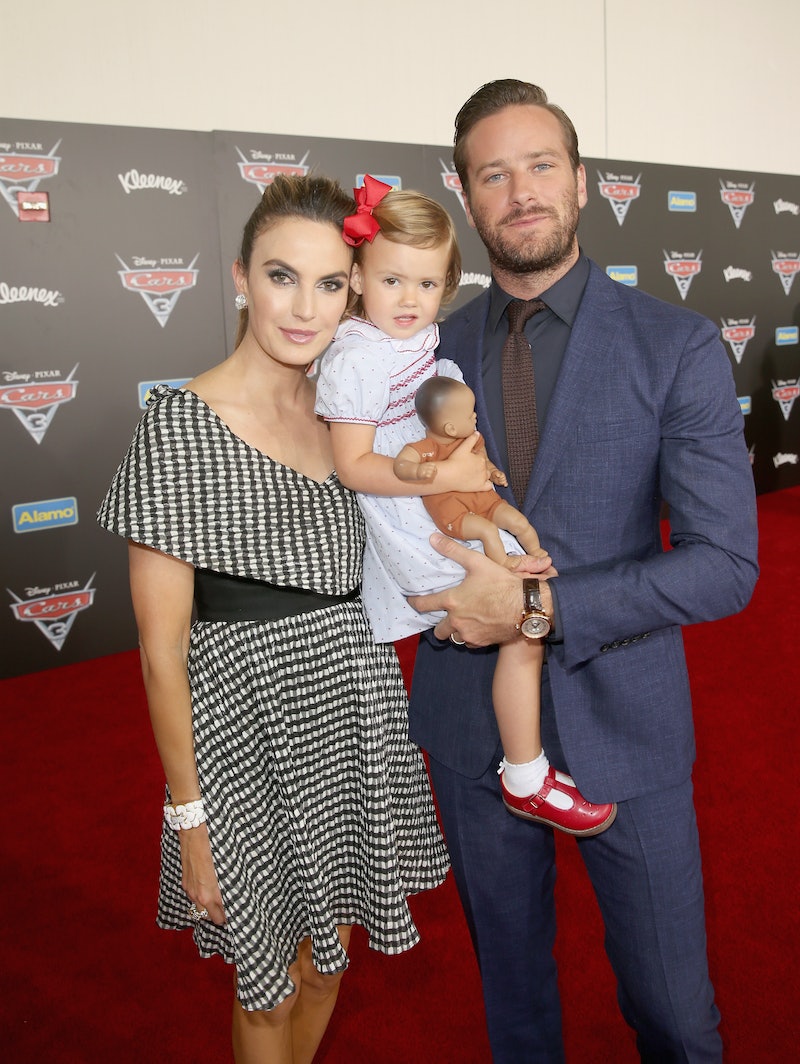 If you need some cuteness in your life today, here you go. Armie Hammer's daughter, Harper, was a flower girl in Nick Jonas and Priyanka Chopra's wedding. Hammer revealed the adorable fact during the Today show on Thursday. Even though the actor couldn't attend the celebration himself due to press for On the Basis of Sex, Elizabeth Chambers, his wife, shared took plenty of photos of their 4-year-old daughter.

"I couldn't go, because [I] was in Europe doing a press tour, but my wife and our daughter Harper went," Hammer revealed about Chopra and Jonas' wedding day over the weekend of Dec. 1. He then revealed about Harper's big role, "She was one of the flower girls in the wedding."

Thankfully, Chambers shared pictures of Harper wearing her beautiful dresses on social media. In three of the photos, Harper can't stop smiling and it looked like she had so much fun. It's too bad Hammer missed out on not only Chopra and Jonas' special day, but also watching his little girl in action. Thankfully, he can look back at photos. Here's hoping someone also took a video of Harper.

According to People, Chopra and Jonas had four flower girls. It's unclear who the other three flower girls were, but there's no doubt they looked as adorable as Harper did.

For those unaware, Chopra and Chambers are good friends. The founder and CEO of Bird Bakery was also part of Chopra's bachelorette weekend. They're so close in fact, Hammer revealed he and Champers went on Chopra and Jonas' first date with them.

"We were there for Priyanka and Nick's first date," Hammer told Today. "We were sitting there, we kinda watched the two of them talking and we were like, 'Hey, see what's going on?' And now they're married!"

The former Quantico star and the singer also opened up to Vogue about their first date. According to the newlyweds, the first time they went out together they had drinks at the Carlyle Hotel in New York City, one week before they attended the 2017 Met Gala dressed in Ralph Lauren together. After having drinks, Jonas went back to Chopra's apartment, where her mom was hanging out in her nightgown watching Law & Order.

"We hung out for a couple of hours," Chopra told Vogue. "He patted my back before he left." Jonas added, "There was no kiss. There was nothing ... Your mom was in the house! I thought it was a respectful first night." Chopra joked, "It was too respectful if you ask me."

Apparently, their first date also included Hammer and Chambers. Though, it's probably safe to say the married duo simply accompanied them for drinks, and not back to Chopra's place. Sometimes a first date can go smoother or less awkward when you have friends in tow. Whatever the case, clearly the Call Me By Your Name actor and Chambers didn't get in the way of Chopra and Jonas' immediate connection.

There's no denying Chopra and Jonas have quite the love story, and Hammer and Chambers are probably thrilled their daughter got to be part of it by serving as a flower girl.