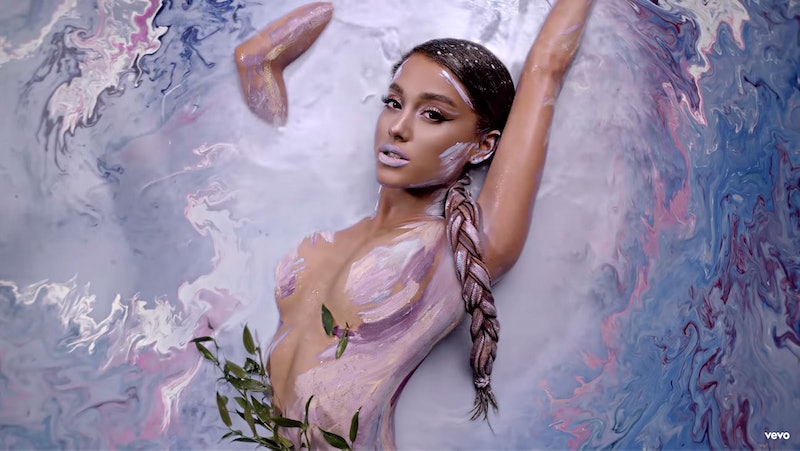 It’s not all the time that popular, mainstream music and niche fine art come together as one, and that's why the release of Ariana Grande’s “God Is A Woman” video in July was so momentous for fans. From a sneaky Harry Potter reference to an homage to Michelangelo's The Creation of Adam, the video had tons of deeper messages behind its imagery. One of these messages came from one of the most beautiful scenes in the video, in which Grande was painted in soft pastel pinks, blues, and lilacs, surrounded in a pool of similar colors. The woman responsible for constructing that memorable scene is installation artist Alexa Meade, and she tells Bustle how that gorgeous artwork came to be.

It all started when Meade's previous collaboration with Sheila Vand and milk caught the attention of Grande’s manager, and they spent years in talks about working on a music video before coming together for the "God Is A Woman" clip. “They wanted the imagery to feel somewhat suggestive and evocative, and almost in a way of a Georgia O’Keefe painting,” Meade says of the team's idea for the video, when we speak over the phone. “So we started with the base inspiration for the shape around Ariana in the liquid to be like a Georgia O’Keefe flower.”

Quick art history refresher: O’Keefe was an American painter who was known for painting large flowers, and over time it has been pointed out time and time again how her flowers resemble the female genitalia. Taking a look at the scene of Grande in the pool of colors, it’s easy to see how this idea inspired Meade's work in the video.

Shortly after the video premiered in July, many “God Is A Woman”-inspired makeup tutorials and social media posts about the clip took over the internet. Meade had seen her work inspire others before, but the level of passion fans had for "God Is A Woman" was quite unexpected.

“It’s very cool because I’ve seen people before create tribute art to my paintings and put their own twist on in,” she says. But "for some reason it didn’t occur to me that when we did something for someone as notorious as Ariana Grande, that there would be [an] exponentially greater number of people trying their hand at it."

Meade even got to see a few in-person recreations of the look inspired by the video on Halloween, which was very special for her. "It’s really cool," she says, "to see the ways that my art might have sparked someone to pick up a paint brush or do something outside of their everyday. So I find that really humbling."

Meade's foray into this type of art started with a fascination with shadows that led her to experiment with putting black paint over shadows. Through further exploration, combined with her interest in manipulating light, she eventually discovered that she could make three dimensional objects and people appear more two dimensional by, in her words, “painting reality on top of itself.”

Essentially, instead of making a canvas come to life like most artists, she's altering real life so that it can be put on a canvas. For Meade, transforming three dimensional objects to appear more flat is “a beautiful way of capturing something everyday and representing it in a new light, quite literally with the introducing of light and shadows.”

Working on "God Is A Woman" also allowed Meade to put her education to use. A Political Science major in college, the artist has used that passion to inform her choices when picking projects. "God Is A Woman," for instance, is an overtly feminist anthem and the video is full of deliberate images that evoke empowerment, like the O’Keefe-inspired flower. And back in 2017, Meade collaborated with movement artists Jon Boogz and Lil Buck to create a short film titled Color of Reality, about police brutality and gun violence in America.

In addition to working on "God Is A Woman," Meade spent much of her summer as part of Refinery 29's 29Rooms experiences across the country. And to wrap up this year, she'll be doing an installment in Beverly Hills titled "Immersed in Wonderland." Meade is continuing to take her niche art form and intertwine it with more mainstream forms of pop culture to amplify the storytelling impact. With each project, she's giving the world new, innovative ideas on how to push the limits of art whenever possible.