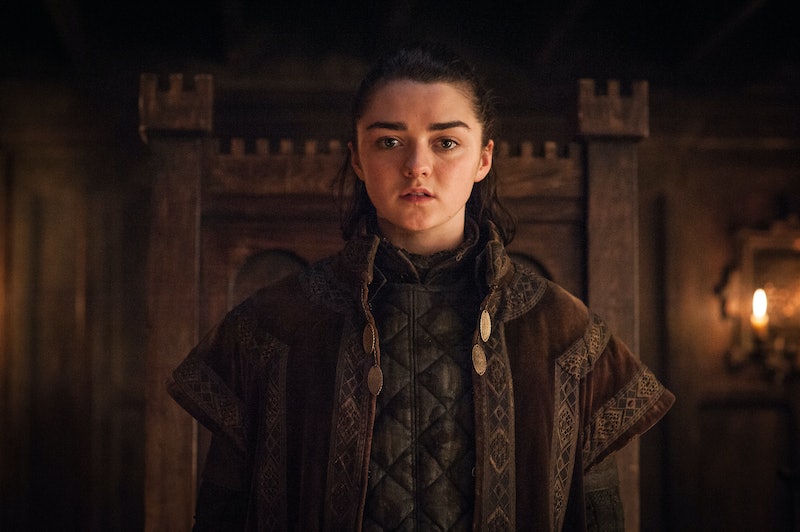 If Game of Thrones has evolved in any way over the past few years, its done so within the stories of its female characters. Women who were once sidelined, underestimated, and mere supporting characters have taken charge and are advancing their own agendas. That much was clear during the Game of Thrones Season 7 premiere, which had feminist moments in spades. Throughout the hour, fans' favorite female characters exerted their power, for good or for evil. Daenerys Targaryen finally arrived on Dragonstone, the island of her ancestors, to begin her Westerosi takeover campaign. Cersei Lannister, misguided as she may be, practically declared herself an Empress, taking no heat from brother Jaime. Sansa Stark had the guts to speak out against her "half-brother" Jon Snow and solidify that she's also a force to be reckoned with. Little Lyanna Mormont exclaimed that she'd not be sitting around knitting while men fought for her, rather she'd train to fight as well. But, in the midst of all that power, you may have missed the small, but oh-so-important moment of feminism that came in the first few minutes of the premiere. In a cold open set at The Twins, Arya Stark may have taken many lives, but she also performed an incredible act of feminist solidarity.

At the end of last season, Arya returned to Westeros to enact revenge upon Walder Frey, the old crank who murdered her family, and it seemed like she had finished the task and was heading out to cross off more names on her hit list. But, when the season premiere, "Dragonstone," opened with Walder addressing the members of his house, audiences immediately knew something was afoot. Was it a flashback or something more? As Walder went on to describe how the members of his house had devotedly helped murder Arya's family, it became clear that Arya had used her acquired abilities of the Faceless Men to assume the appearance of Walder. As he encouraged the family members and loyal house members to drink to their success, one by one they started to gag and spew blood, and Arya's vengeance began to take effect.

But next to Arya/Walder stood one of the few women of the house, no doubt one of the Frey wives or daughters relegated to servant status. Before it became obvious that the wine had been tainted, she reached for her own cup, hoping to imbibe in celebration along with the rest of the room. "Not you!" Arya/Walder snapped, saying he'd never waste good wine on a woman. But once the poisoning took effect and the men of the room began to fall, Arya revealed herself to the Frey woman — it was clear that Arya wasn't simply acting the part to perfection, denying her wine was actually saving that woman's life.

Arya has no doubt been through some harrowing experiences since Game of Thrones began, and as she's learned to survive and take lives of her own, fans might have worried that Arya was just turning into an emotionless killing machine. Whether leaving The Hound behind alive, but dying was an act of charity or revenge is still being debated. Many think Arya has gone totally cold, but Sunday's act of mercy proved otherwise. Not only is Arya capable of extending sympathy, but she knows a fellow sufferer when she sees one. The women of the Frey household are second class citizens of forced polygamy; child brides, rape victims, and abused at the hands of Frey men. Like the Crasters north of The Wall, the Frey family disrespects women to the point of mistreatment and extreme debasement. Even though Arya knows that the woman is of House Frey, and was probably there when her entire family was killed, Arya also knows that she's a victim.

Letting that Frey woman live was an incredible act of feminist solidarity on Arya's part. Though she knows of the many evils women are capable in the world of Westeros, she also understands that often times, even if they belong in enemy houses, women are innocent bystanders in their own and others' suffering. Her actions prove that not only is there still somewhat of a unifying understanding among the women of this world, but it also shows fans that Arya's not turned int a stoic revenge machine. Arya will never be the same after all she's endured, but this moment revealed that humanity and empathy still have a place in her game.