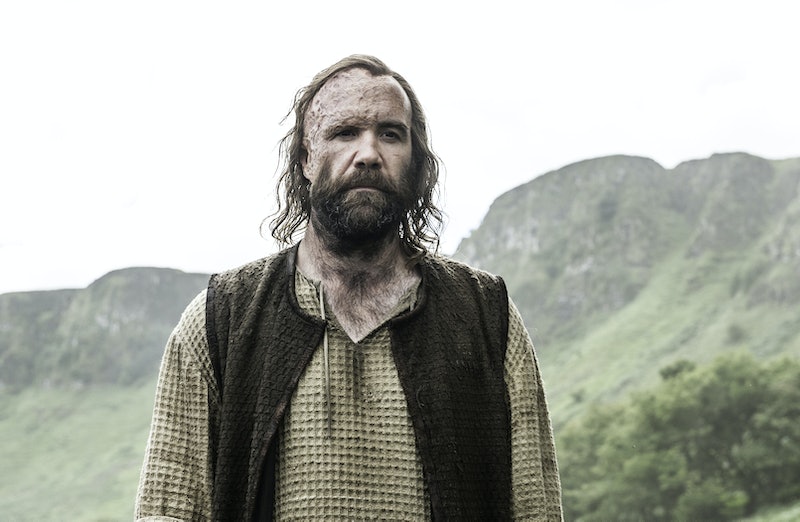 One of the qualities that has made Game of Thrones so popular is its brutal treatment of its own heroes. The fact that your favorite characters — Ned, Catelyn, Robb — could die a horrible death during any given episode gives the series a sense of urgency, and makes GoT stand out from the many other shows too scared to kill off fan favorites. Even through their heartbreak, GoT fans have come to accept that this trait is what makes the show so special. Recently, though, it seems that GoT is treating audiences' understanding of how the show handles death as a bait and switch. There have been multiple death fake-outs on the show, from Jon Snow to The Hound, and I, for one, am hoping that GoT doesn't continue this pattern.

It all started at the end of Season 5, when Jon Snow was seemingly stabbed to death by mutinous members of the Night's Watch. Fans were in shock, as despite Jon being a fan favorite, the slaughter of Robb Stark, Catelyn Stark, and Talisa at the Red Wedding solidified the fact that GoT was not against killing off its most beloved characters. So when Jon was stabbed, many people thought he was dead for good, but others, despite the fact that the series had already offed numerous beloved characters and all evidence suggested that he was truly gone, refused to accept that he was dead.

And thus began a year-long "Is he or isn't he dead?" farce that led to countless Internet theories, fan protests, and thinkpieces. People began analyzing Harington's hair, accosting him at airports, and asking him if he was really dead. Meanwhile, the actor himself had to take up an elaborate, year-long lie that found him fibbing to even his closest friends and family. And for what? In the end, Jon Snow came back to life, raised by Melisandre's red magic. Snow was only truly dead for two episodes, and the whole thing really turned out to be the worst-kept secret in Westeros. Fans' reactions to Snow's rise from the dead transformed over the course of the year from an excited, "Please bring him back!" to an exhausted, "We know he's coming back, so just get on with it already."

That exasperation in and of itself should be a lesson to the GoT showrunners that the fake-out caused more frustration than excitement, but it seems that they haven't learned. Two weeks ago, GoT re-introduced a character long thought dead: Benjen Stark, Ned's brother and a member of the Night's Watch. He returned despite having not been seen since Season 1 after riding off to investigate beyond the wall; his horse returned without him. But that's not the only recent resurrection; "The Broken Man" brought back a familiar face whom viewers long thought dead: Sandor "The Hound" Clegane. As we all recall, Arya left The Hound for dead after he was beaten to a pulp by Brienne of Tarth at the end of Season 4. Apparently, he was nursed back to health by a former soldier turned Septon and had been living peacefully among a group of villagers. (Though, where he's headed now seems decidedly unpeaceful.)

That episode ended with yet another fake-out death: Arya's. As punishment for abandoning the Faceless Men and not doing what Jaqen H'ghar had asked, the Waif was given permission to kill her. She stabs Arya in the gut multiple times on a bridge and tosses her into the water. Arya's later seen wandering through the crowds of Braavos, soaking wet and clutching her wounds, her fate a mystery. The story's metaphor is clear: just as The Hound resurfaces and finds himself doing good deeds, Arya is punished for her bad ones, one of which may be not bestowing mercy (the name she ironically chose for herself in the episode prior) upon the dying Hound. But it's unclear whether or not it was actually Arya who was stabbed. Theories are circling that perhaps it was Arya disguised as the Waif, who stabbed the Waif disguised as Arya, or perhaps that it was Jaqen disguised as Arya whom the Waif stabbed — or the Waif and Arya might be the same person. Either way, the theorizing clarifies one thing: no one believes Arya is truly going to die as a result of her injuries. Fans have been conditioned to expect that the worst can happen, but we've now rejected that idea. We no longer believe it.

And why should we? The lengthy sham that was Jon Snow's death and the return of Benjen and The Hound have taken away our fear. These revivals have told us that if audiences love a character enough and call for their return, the series will make it happen. And Jon and The Hound aren't the only return fans had been calling for. Book spoilers ahead! The Lady Stoneheart subplot from author George R.R. Martin's books has been one that show fans have been clamoring for ever since Catelyn's death. In the novels, although Cat has her throat slit and is left for dead, she comes back to life, very similarly to Jon Snow. She's revived by Beric Dondarrion, who uses the magic of the Lord of Light, like Melisandre did with Jon.

After Cat's death, the actor who played her, Michelle Farely, was asked by EW about the possibility of the inclusion of the Lady Stoneheart plotline in the show, only to respond, "Yeah, the character’s dead. She’s dead." Uh huh, sure. We've heard that before. But at this point, including Lady Stoneheart would be the worst thing that the show could do. It's already raised Jon Snow, Benjen, and The Hound, there's little doubt that Arya will live, and even new rumors that Stannis Baratheon is alive (despite seemingly dying last season) have come to light.

That sense of urgency that once made the show so compelling is so close to being lost, and including Lady Stoneheart would put it over the edge. These multiple fake-out deaths are threatening to make audiences uninterested in the fate of the show's characters, and the minute we stop caring is the minute we stop watching. I, for one, don't want to see GoT lose its edge, and doubt it will, but right now, the show is taking its own message a bit too seriously — that what is dead may never die.