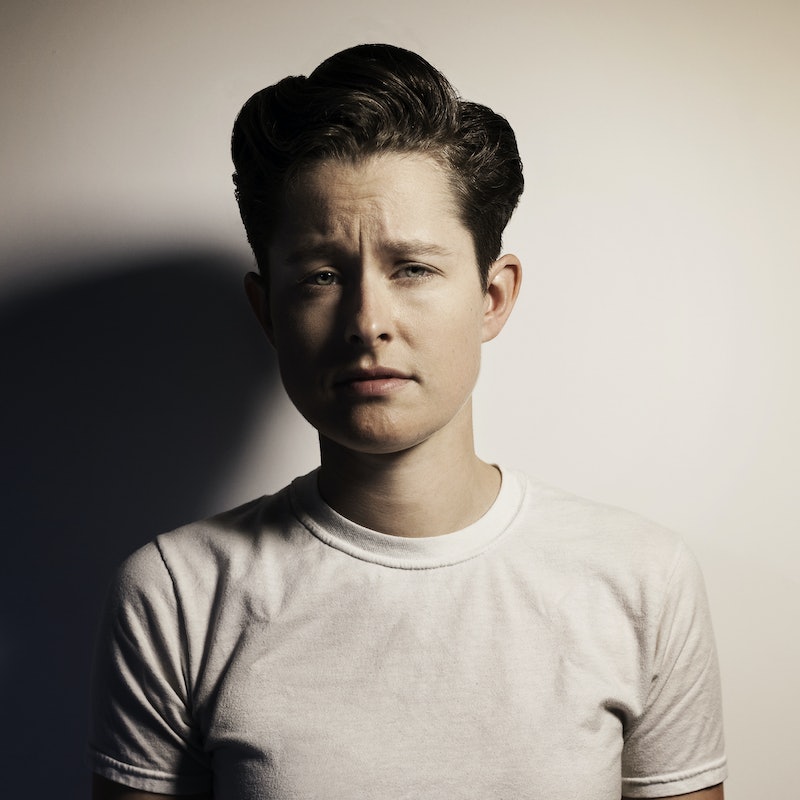 Soon after the Trump administration rescinded the transgender bathroom protections for students established during Obama's presidency, comedian Rhea Butcher shared a bathroom story of her own on Twitter. As a five-year-old child, Butcher, who uses she/her pronouns and identifies as "a person on the non-binary spectrum," was yelled at for being in a public women's restroom. She decided to share this story to add her own voice to the fact that, as she put it in a tweet, "The bathroom fight is about much more than peeing. It's about the right to exist. To be."

Now, Butcher explains her decision to speak out, why she's still hopeful about the future of LGBTQ rights, and what she thinks allies can do — and not do — to support the trans and genderqueer communities, as told to Bustle Associate Entertainment Editor Lia Beck.

As a stand-up comic, I've talked on stage about the bathroom experience I had at five years old before, but I have talked about it in a way that is for "mainstream audiences." I'm always trying to talk about my experience to people who have maybe not experienced the same thing. But I realized at some point that, sometimes, you have to just share the experience with everybody to make an impact.

That point came into clear focus when the Trump administration rescinded the Obama era bathroom protections, which provided guidelines for schools on making bathrooms accessible for transgender students. It really shattered me in ways that pretty much every executive order and everything that's come out of this new administration has. But, particularly, it shattered me because I’ve actually experienced what those protections were designed to (supposedly) prevent.

I really am just trying to bring my own experience into a fold of experiences and say, "I hear you. I've also been through this. I see people as human beings. We're all in this together."

The bathroom has been a charged space for a long time, and it's a space that does not need more laws — it needs more freedom. These "bathroom" laws make no practical sense, and highlight some lawmakers' inability to actually understand what it means to be a transgender person. All the rules accomplish is putting trans kids in danger that they otherwise were not necessarily experiencing by using the bathroom of their gender — all under the guise of “protecting” cis-girls and cis-women.

For me, gender is an exploration and I'm still trying to understand myself as a person on the non-binary spectrum. But when I share the story of my experience as a five-year-old in a bathroom, I don't do so to claim that my experience is the experience of a transgender person, and I don't want to take any spotlight. I really am just trying to bring my own experience into a fold of experiences and say, "I hear you. I've also been through this. I see people as human beings. We're all in this together." And hopefully, to help us move forward.

Maybe there are people who haven't heard me talk about this yet. Maybe there are comedians who follow me who haven't heard me talk about this yet. If people who follow me and read my Twitter every day, or listen to me on podcasts, or whatever connection they have to me, could see me say, "Hey, this may be a far-off idea to you, if you are not a transgender person or you do not have transgender people in your life, but this experience has also affected this person you interact with on a daily basis." Maybe realizing that this person they know has gone through a similar experience will give those people a more personal connection to why these bathroom protections matter.

...when it happens to you consistently throughout your life and sometimes that action is followed by somebody asking what's wrong with you, after a while the experiences all accumulate and you're carrying that around.

When I go into a public restroom, it sends me back to that time when I was five. I'm that kid again, and I'm not able to always stand up for myself because I'm transported into that situation. Most of the time when I go to the restroom, my head is down and I'm staring at the floor. I'm trying to get past people as quickly as possible, which puts the other adults around me in this authoritative position, so I sort of feel less-than every time.

The last time I experienced an issue in a bathroom where it was heightened in a way that I felt immediately and consistently unsafe was in a bathroom in Texas. That experience, like the one when I was a five-year-old, was also with a man cleaning the bathroom who told me that I wasn't supposed to be in there. I've had a lot of women get very upset when they've seen me in the women's bathroom, but the threat of violence doesn't necessarily happen to the same extent as it does when a man is the one getting upset. I've had that happen twice in my life, where I walked into a bathroom and a man was afraid upon seeing me there. It's so perfectly ironic. Where's the joke in there?

The incidents happen pretty consistently everywhere. When I travel for work, it happens a lot in airports; and it doesn't matter what city the airport is in because there are people from everywhere there. In fact, location doesn't necessarily matter at all. I work in downtown Los Angeles, where my wife, Cameron Esposito, and I are working on the second season of our TV show, and recently, a woman did a double-take when she saw me in the women's restroom. People work here, they know where the bathrooms are, they know which bathroom they're walking into, but when I was walking out she stopped, looked at me, and looked at the door to make sure she was going in the right restroom.

It doesn't sound like something that would be stressful, but when it happens to you consistently throughout your life, and sometimes that action is followed by somebody asking what's wrong with you, after a while the experiences all accumulate, and you're carrying that around.

And yet, with everything going on right now and the prejudices I've experienced, I do have hope for the future.

When you look back at the fight for marriage equality, it was very important that we were talking about marriage as access to equal law and benefits, but the really wonderful effect was that the LGBTQ community began talking about their right to love and care for somebody and spend a life together. From that, came more Americans and young Americans who gained understanding. They started to see LGBTQ people as people who cared about other people and wanted to spend their lives with those people, instead of feeling scared of us. That understanding was what actually pushed marriage equality forward.

I know that if I was eight or nine years old and saw Gavin Grimm on television, it would have changed my life. Visibility matters, even in the context of negativity.

So while I don't support any of the executive orders or actions by this White House, I have hope. We are now talking about the existence of transgender people and transgender kids and if we can shine lights on trans people and allow for their stories to be told by them, as opposed to a big panel of cisgender heterosexual people speculating about it, the conversation will change.

Visibility matters, even in the context of negativity.

So how do we act as allies and support that visibility? For starters, it's important that allies don't say, "I don't care." Many LGBT allies will use the phrase, "I don't care who you love," and while I understand the sentiment and the intention, in my experience, I do want people to care. I want people to actually care about me. I want you to see me as a person and as a friend and a comic and as a human being, but I also want you to see who I am and what makes me, me. I think a lot of people feel that way. "What do you need from me? What can I do? Who can I help?" — those are great questions to ask.

Read stories of trans folks and what they've been through; follow trans people and genderqueer people on Twitter; read books by trans authors; and ultimately strive to understand the experiences of others.

Almost everybody has some sort of privilege somewhere in their life. And finding that privilege, understanding it, being open to it, and finding a way to use it to help others is going to be the best way for everybody to get through the next few years.

In addition to the suggestions for how to support the trans and LGBT communities included above, Butcher also suggests supporting Trans Lifeline and checking out the webseries Herstory.