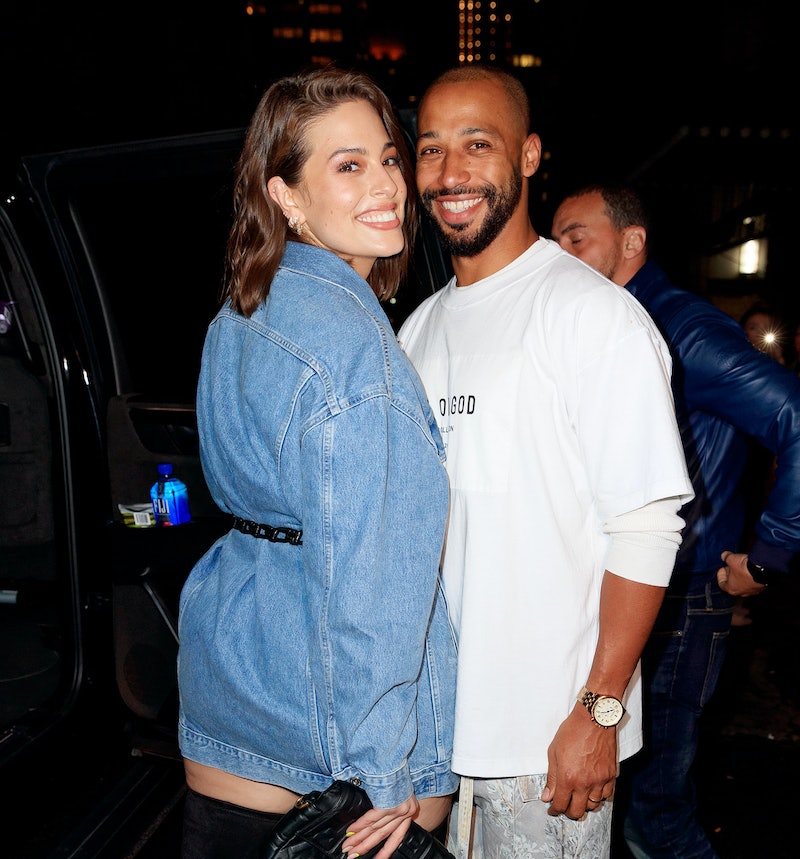 And baby makes three. Supermodel Ashley Graham and husband Justin Ervin welcomed a son on Jan. 18, the couple shared via their Instagram Stories on Monday, Jan. 20. Although Graham didn't divulge the new baby's name, she revealed that her and Ervin's "lives changed for the better" when their first child was born at 6:00 p.m. on Saturday. Adding a red and a blue heart emoji to the post, she also thanked her more than 10 million followers for their "love and support during this incredible time." For his part, Ervin shared his wife's post to his own story, though he didn't add any additional information.

Graham announced her pregnancy in an Instagram video with her filmmaker husband on Aug. 14 — which happened to be the couple's ninth wedding anniversary. "Nine years ago today, I married the love of my life," she began the post's caption. "It has been the best journey with my favorite person in the world! Today, we are feeling so blessed, grateful and excited to celebrate with our GROWING FAMILY! Happy anniversary, @mrjustinervin ❤️ Life is about to get even better. 😘"

During a November appearance on The Ellen DeGeneres Show, Graham had revealed the baby's sex, excitedly announcing she was "gonna be a mommy to a boy." The inclusive swimwear designer also shared with the daytime talk show host that her due date was in "January sometime."

In a candid moment on her Pretty Big Deal podcast the same month, Graham also tearfully admitted she'd struggled with her "new body" after posting a nude pregnancy photo following her initial pregnancy announcement. After first feeling "terrible" about herself, she explained she quickly found a means of support. "I was like, 'Get it together, Ashley, there's other women out there that are going through the same thing as you — why don’t you have a dialogue?'" she recalled.

Shortly afterward, Graham scored her first solo Vogue cover, posing for the magazine's Jan. 2020 issue while five months pregnant. Of expecting a son, Graham, who has two sisters, divulged in the interview, "I don’t know anything about boys, so I’m so excited." As Ervin — who posed shirtless with his wife for one of the Annie Leibovitz-shot photographs — joked, "She owed me a boy. What with all of this wonderful, divine, feminine energy she has around her 24/7, I want a little sidekick."

Graham also shared with Vogue that fellow celebrities such as Serena Williams, Kim Kardashian, and Amy Schumer had already shared some wisdom about motherhood: "Kim immediately started telling me, 'Ashley, the pregnancy may be the hardest part, but the birth is the easiest.' I’m just taking in advice from everyone and not putting too much pressure on myself. . . . There's just this camaraderie. It's a secret society that I didn't know about."

Now that she and Ervin are officially first-time parents, she's sure to have plenty of support from many of her fellow mommy pals.

More like this
Meghan Trainor & Daryl Sabara Are Expecting Their Second Baby
By Jake Viswanath
Pamela Anderson’s Dating & Marriage History Could Be Its Own TV Series
By Jake Viswanath
Bennifer's Relationship Timeline Now Includes A Grammy Date Night
By Jake Viswanath
Vanessa Hudgens Is Reportedly Engaged To Cole Tucker
By Jake Viswanath
Get Even More From Bustle — Sign Up For The Newsletter
From hair trends to relationship advice, our daily newsletter has everything you need to sound like a person who’s on TikTok, even if you aren’t.