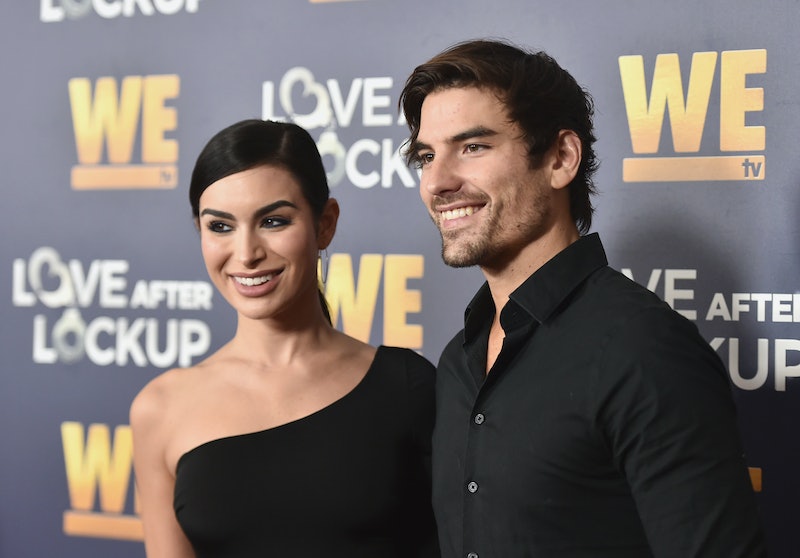 Ashley Iaconetti and Jared Haibon's relationship is anything but traditional — and that's what makes it so special. They weren't on the same page in Bachelor In Paradise originally, but they're super in love now. Ashley I.'s Instagram photo with Jared, Carly Waddell, and Evan Bass shows how far the two couples have come, because no two love stories are the same.

"Just because a relationship starts off awkwardly, doesn't mean it won't work out," Ashley captioned a photo of the four of them on the beach. It's hardly the first time she's referenced her complicated history with Jared, but it's still nice to see them poking a bit of fun at the awkward start to their love story.

Jared and Ashley announced that they were dating last May, and their engagement announcement was soon to follow. In a 44-minute video for Ashley's web series The Story of Us, the two talked about their history on Bachelor in Paradise and why their relationship had changed over the years. Jared admitted in the video that before meeting Ashley, he'd primarily dated women who were "soft-spoken" and "shy," so she was a lot different than his exes. (Ashley, meanwhile, described herself as a "big personality.")

Fans will remember that Ashley and Jared didn't always see eye to eye on the show the first time around. They were on Bachelor in Paradise Season 2, and Ashley actually called it "love at first sight," at least on her end, in the Story of Us video. But after Jared decided not to go to the Fantasy Suite with Ashley, she left Paradise.

Still, a lot can change in a few years. Jared and Ashley returned to Bachelor in Paradise's fifth season to get engaged on the beach, a symbol of how much their relationship has grown. Jared got down on one knee as all of the new Paradise contestants watched from above, and the whole thing was super romantic.

As for Carly and Evan, one of Paradise's other success stories, they also shared some Instagram posts this week that harkened back to their time on the show. Evan shared a picture sporting bathrobes at a Cancun resort, captioning it, "Fantasy suite sweet vibes." It looks like the shot is from the same vacation they're on with Ashley and Jared, since Jared geotagged another photo to the same location.

Carly and Evan's Paradise history isn't as dramatic as Ashley and Jared's. But their relationship wasn't exactly smooth sailing from the get-go. As E! News pointed out, Carly initially said her first kiss with Evan on the show's third season wasn't good at all. They eventually got past that initial hiccup, though. And Evan shared with E! in 2016 why Paradise's short timeline actually helped strengthen their relationship.

"You're just hanging out on the beach all day and night," Evan told the outlet. "There's no distractions, there's no cellphones, there's no TV, nothing. It's just interaction." It makes a lot of sense — if you're spending all those hours talking to someone, you can get to know them pretty quickly. Things definitely worked out for them in the end, too — Carly and Evan have a daughter together and are happily married.

It's worth remembering that plenty of relationships that have seemed solid on the Bachelor shows haven't worked out. And even though Ashley and Jared (and Carly and Evan, to a lesser extent) were off to a rough start at first, there's also a ton that fans don't get to see on screen. These two couples are definitely the real deal, and it's safe to guess that Evan and Carly will be by Ashley and Jared's side when they get married in August.