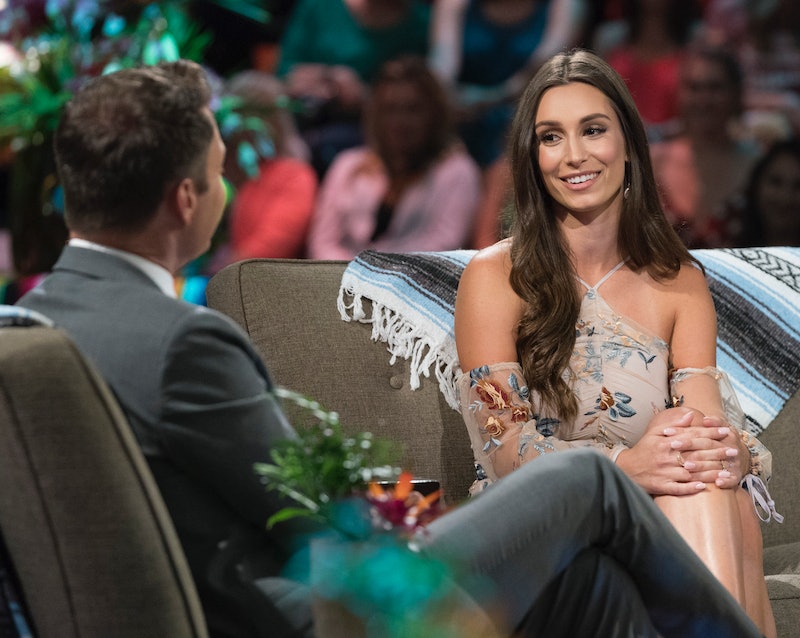 On Monday night, Astrid and Kevin — arguably the most solid couple on Bachelor in Paradise this season — ended up calling it quits, with both of them leaving paradise instead of having a Fantasy Suite date and possibly getting engaged. But how are they feeling now? Astrid and Kevin talked on the BiP finale, and it sounds like he let his past get in his head when he was trying to make big decisions about his relationship. The good news, though, is that there's definitely hope for their romantic future going forward.

Astrid came on stage first, telling Chris Harrison that she felt like she wanted Kevin to take responsibility for the way things ended between them, but she definitely left the door open for communication (especially since she did admit that they've been talking to each other since their Paradise breakup). And when he had the opportunity to join her on stage, Kevin was totally willing to apologize to Astrid for the way he acted, even explaining what made him so hesitant about their relationship which seemed to be going really well up until the point where he decided that they should split instead of go to the Fantasy Suite together.

Apparently, the words "Fantasy Suite" were pretty triggering for Kevin, and he said that he regretted going there with Ashley Iaconetti on the Bachelor Winter Games and those feelings flooding back made him panic, even though his feelings for Astrid were genuine.

"I feel like there's no one else I'm interested in, I want to see where this fully goes, and I'm hoping for the best. I'm hoping it goes where it should," he told Chris. But now, he said he understands that he brought a lot of baggage to paradise, and that wasn't fair to Astrid, who said him blindsiding her with a breakup did . a number on her confidence and in her trust in him.

"I felt so confident with him while I was there and then when he broke up with me it made me question myself," she said. "It made me question my intuition." But Kevin went home, talked to his family, went to see his therapist, and came to the conclusion that he's still in love with Astrid and wants to try to make things work, despite his fears. He said:

"Nothing she did made me act that way, it was my own stuff I was dealing with. I still love her, and I'm just hoping now we can progress. She's one of the coolest people I've ever met. She has qualities that none of you know that are incredible. . . I'm definitely madly in love with her."

How sweet, right? And fortunately, Astrid still feels the same way about him, and it seems like everything is going well for them these days — at least, way better than it was when we last saw them in Mexico.

Now, we just have to keep our fingers crossed that it's smooth sailing for them from here on out. They seemed perfect for each other, so maybe they can get back to that place again.