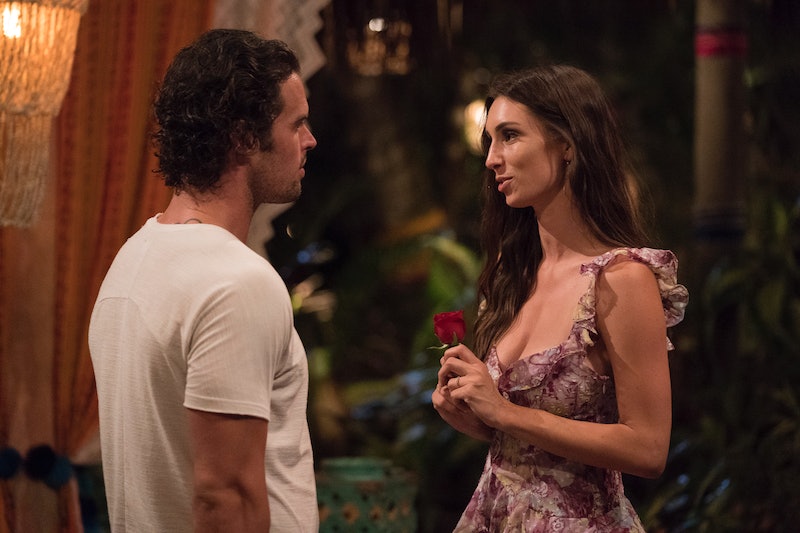 Monday night's episode of Bachelor in Paradise produced one of the most shocking breakups of the season when Astrid Loch and Kevin Wendt broke up after Chris Harrison offered them the Fantasy Suite and a potential engagement opportunity. Since the couple had seemed so solid, almost too solid, it made for a surprising twist, but Astrid's response to her BiP breakup proves that she's going to turn lemons into lemonade. The 26 year-old posted a screenshot of her Instagram page to Twitter on Monday night with the caption, "Love you all... if you wanna make me feel better follow me in Instagram so I can at least make money on ads." She even added a heart emoji to seal the deal.

Astrid's move to profit from everyone's empathetic reaction to her breakup shows what a savvy reality star she is. If you're going to get your heartbroken on national TV, you may as well make a few bucks off of it, right? She definitely deserves something from the experience after Kevin's questioning of their relationships took her by surprise as much as it did all the viewers at home. "I wake up every day and ask you what you're thinking," Astrid told Kevin on Monday's Paradise episode, after he'd told her he wasn't sure about their future together. Kevin definitely could have expressed those doubts about the relationship during their morning check-ins, but instead it happened when Chris Harrison prompted them to make a big decision.

Before Astrid posted about amassing more Instagram followers so she could potentially get that good Flat Tummy Tea money, she posted another tweet about the big breakup. "Getting dumped was not part of the 12 month plan," she said, referring to the plan that Kevin made with her on last week's episode for their future together. Astrid decided that she would move to Toronto to live with Kevin, who competed on Canada's Bachelorette before competing on Winter Games earlier in 2018.

As you can imagine, Astrid has received lots of support from her Bachelor Nation allies. Raven Gates, who appeared on Nick's season of The Bachelor along with Astrid retweeted the plea for Instagram followers in order. "Lmfaoooo I hate you. ... but go follow her lmaooooo," Raven tweeted. At least Astrid has everyone laughing along with her instead of at her following the abrupt breakup.

As solid as Astrid and Kevin's relationship seemed on Season 5 of BiP, Bachelor Nation fans have seen Kevin pursue a few different relationships, not even including the Canadian Bachelorette season he appeared on. During Winter Games, Kevin and Ashley Iaconetti had a relationship, as short-lived as it was, and earlier in Paradise, he started off hanging out with Krystal before eventually striking up a romance with Astrid.

While it's a bummer for Astrid that someone who she'd lounged on daybeds in Mexico for a few weeks ultimately didn't want to take the relationship to the next level, at least you can rest easily knowing that she has exciting sponsored content paychecks to look forward to in her future. Assuming her screenshot was taken on the night of Sep. 10 after the episode aired, it looks like her tweet worked. As of this writing, Astrid has 200,000 followers on Instagram — 20,000 more than she did at the time of the screenshot.

Clearly, Astrid knows a thing or two about how to capitalize on her Bachelor Nation fame. And for that alone, she deserves better than a guy who can't commit.