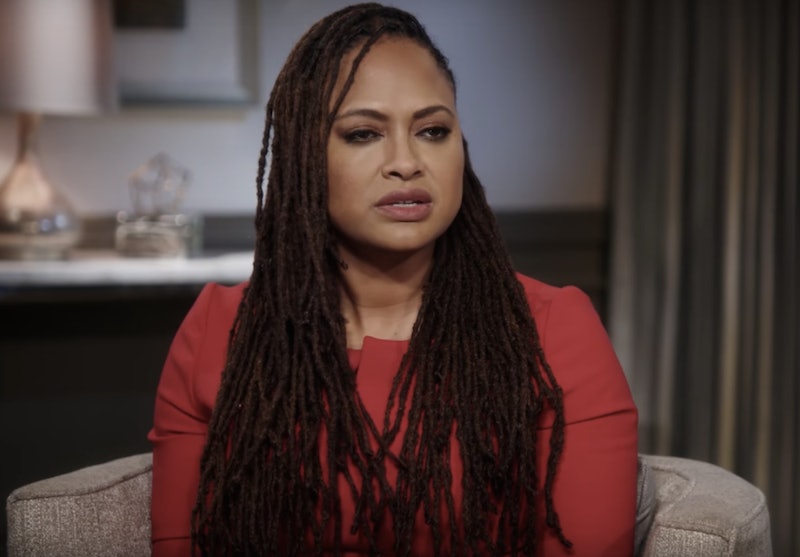 Ready, set... Oscar. It's Academy Award season, and you know what that means: the teams behind the Oscar-nominated movies are doing their darnedest to campaign their babies into the winning spot. Thus, shortly after 13th got an Oscar nom for Best Documentary Feature, Netflix announced a new feature 13th: A Conversation with Oprah Winfrey & Ava DuVernay, which will premiere on Jan. 26. The feature does pretty much what it says on the tin; it shows the documentary's director, DuVernay in conversation with Winfrey. According to Variety, Winfrey first became interested in interviewing DuVernay after the pair got talking at a screening of 13th.

Netflix's effort makes sense, since it's the fourth year in a row they've had a contender in the Best Documentary Feature category. And what a documentary it is. The 100 minute long film, which focuses on the criminalization of African-Americans, the U.S. prison boom, and the disproportionate figures for people of color serving jail time, boasts a 97 percent critic approval rating and 93 percent audience approval rating on Rotten Tomatoes.

And with reviews like "13th could hardly be timelier" and "manages to capture the depth and insidiousness of more than a century of cultural, societal and economic oppression," you should probably be bumping it to the top of your to-watch list, too.

If I haven't convinced you to give it a try yet, presumably this Netflix interview will. While the above is just a limited snippet, Winfrey and DuVernay's exchange stresses just how important the film is. When Winfrey states how many people told her they'd simply never thought about the issue before, DuVernay suggests this because they don't "have to think about it" and emphasizes "...if we're forward thinking people, if we're members of the world in the way that we think about justice and dignity, then we have to" think about this topic.

And who better to interview DuVernay than Winfrey? All four of Winfrey's own movie turns have been parts which focused on the African-American struggle and the entertainment personality also has a long history as a civil activist, receiving the National Civil Rights Museum’s prestigious Freedom Award in 2005 for her work as a "great humanitarian" who "provided resources and money to build schools for at least 50,000 children in South Africa." Like DuVernay, Winfrey cares terribly — which makes her the ideal candidate for probing the director for more information.

Watching the feature is also a way of showing 13th your support, something that's vital because this Oscar nomination has been a long time coming for DuVernay. Her last major film, Selma, which also focused on African-American civil rights (though with an older focus, concentrating on the three-month period in 1965, when Dr. Martin Luther King, Jr. campaigned for equal voting rights) and was even more adored by critics with a 99 percent approval rating on Rotten Tomatoes, got nominations for Best Picture and Best Original Song. But the film’s director and actors were shut out in their respective categories.

While this is admittedly, not a best director nomination, since DuVernay first starting directing longform work via documentaries (2008's LA hip hop documentary This Is The Life, followed by three TV documentaries in 2010), it's an award that would celebrate her immense talent in the genre.

So clear your calendar for the evening of Jan. 26, and schedule a night at home with Netflix: lining up first the interview, then the documentary yourself. What better way to honor the work of this remarkable woman?