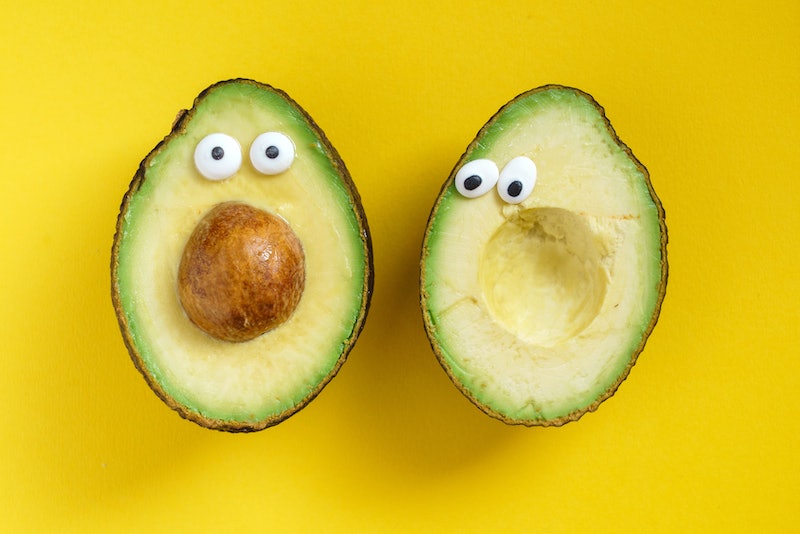 In what is possibly the most aggressively millennial news I have ever heard, today, we have this: A pop-up avocado museum is coming to San Diego, Calif. this summer. Called “The CADO,” it promises to be a “pop-up experience celebrating California’s favorite fruit,” according to its website — and it aims to make its point in the most creative way possible. You’d better act fast if you want to go, though; tickets went on sale today, and, as you might expect, they’re going quite quickly indeed.

According to Delish, The CADO is the brainchild of San Diego-based sibling duo Anne Buehner and Mary Carr; their creative agency, & Boom Unlimited, “[turns] spaces into stories and [transforms] places into shareable moments for brands,” states the & Boom "About" page. To that end, The CADO, which is sponsored by the California Avocado Commission, will use a mobile space built out of 16 shipping containers to tell the story of the humble avocado through a variety of interactive exhibits.

Well And Good reports that features at The CADO will include a “Ripe Room,” which uses textured walls and your sense of touch to teach museum-goers “how to pick the perfect avocado”; you’ll also be able to simulate what it would be like to walk through an avocado thanks to a “100-foot-long ombre hallway, inspired by the light-to-dark flesh of an avocado,” according to Delish (so, hey, you’ll finally get to live out all your Honey, I Shrunk The Kids! dreams), take selfies in a “powder room” dedicated to extolling the fruit’s beauty benefits, and — of course — shop in a grocery-esque store for everything from standard souvenirs like tote bags and pins to things like avocado milk and avocado cereal (whatever those are). If you venture out into the avocado grove that will apparently surround the place, you’ll also be able to order actual food from local restaurants featuring the fruit of the hour.

The CADO is just one in a growing line of museums and interactive experiences devoted to well-loved foods and beverages. The Museum of Ice Cream has arguably been the most visible; originally launched in New York in 2016, it has since opened up several other branches, including one in San Francisco, one in Los Angeles, and one in Miami. High-end sweets destination Sugar Factory also announced recently that they'll be opening a Museum of Candy in New York during the summer of 2018, featuring over 15 “experiential rooms,” restaurants, and — in a move that is quite literally straight out of Willy Wonka — edible murals. And, of course, there’s La Cité du Vin, the “wine theme park” that opened in Bordeaux, France in 2016 and has since gone on to become one of the must-see attractions of the area.

La Cité du Vin is sort of the outlier here; it’s a permanent museum, whereas the others have all followed the temporary exhibition model popularized by the Museum of Ice Cream. That’s also how The CADO will work: According to Delish, it opens on June 16 and will run through August. The space its shipping container construction will be located at the mixed-use development Liberty Station, which was once the Naval Training Center San Diego. (The Naval Training Center closed in 1997, soon after which the City of San Diego gained control of the property and began renovating it into a center for commerce, history, and the arts.)

Tickets went on sale on The CADO’s website today (that is, April 10, for whoever’s keeping track) — and they’re going fast. There are also a few details to keep in mind: Tickets are sold by date and time slot (not unlike many other similar experiences; timed entry seems to be A Thing now) and can only be purchased in groups of four or less at a time you. They cost $27 a pop for everyone over the age of 3; however, you can get a small discount if you visit on one of The CADO’s “Family Wednesdays”: On those dates, tickets are $22 for adults and $12 for kids. Tickets also must be purchased in advance — so, you can’t just show up and expect to be allowed in right then and there.

The CADO’s FAQ recommends arriving at the museum 20 minutes before your time slot, but specifies that you must be at the door at least 5 to 10 minutes before. Once you get in, it’ll take you about an hour to get through the whole thing. Pets aren’t allowed unless they’re service animals — but on that note, The CADO states that they are “completely ADA accessible,” so hoorah for that.

Head on over to The CADO’s website for more; the info available is a little sparse right now, but more will likely arrive the closer we get to opening day. Now if you’ll excuse me, I have some toast to make…

More like this
Is The Insta-Famous Always Pan Actually Worth It?
By Jessica Goodman
Starbucks Released New Menu Items For The Summer
By Emma Garza
Taco Bell Announced A Crunchwrap & Tostada Made With Cheez-Its
By Emma Garza
A Beginner's Guide To Drinking Whiskey
By Alexis Morillo
Get Even More From Bustle — Sign Up For The Newsletter