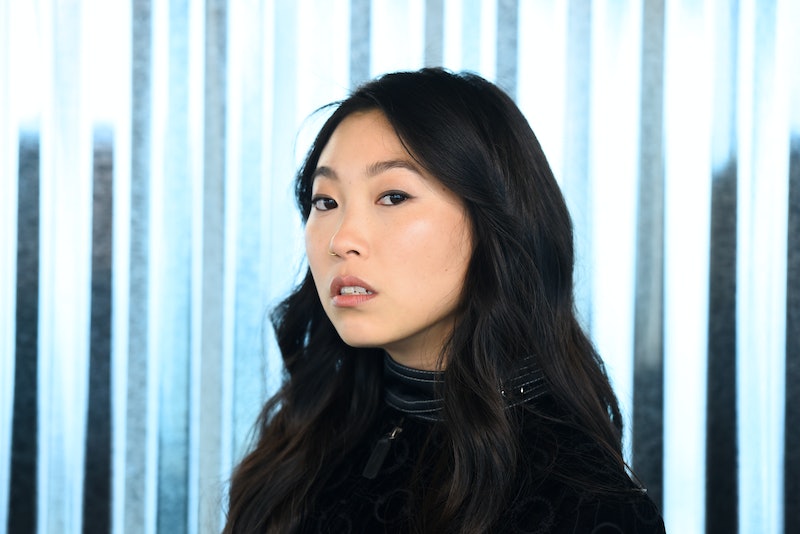 The second episode of the Saturday Night Live season will be hosted by rapper-actor-all-around-gem Awkwafina, and it looks like it's going to be an extremely on-brand night for her. Awkwafina's Saturday Night Live promo proves she's more than ready for her hosting debut, with or without live chickens. In the teaser, fans can watch Awkwafina rock an outlandish faux fur coat, drink champagne out of the bottle, throw money, and snap at cast member Beck Bennett. Everything Beck Bennett does in the clip makes him look goofy, uncool, or downright strange, but Awkwafina looks pitch perfect in comparison. It's just the two of them dancing, and there's very little dialogue, but it's totally effective. Even if it doesn't offer this week's host quite enough time to rasp at her co-star.

As most have noted, this is the first time an Asian woman has hosted SNL in almost 20 years. The last Asian woman to do so was Lucy Liu, back in 2000. Not only that, but Jezebel estimates that only four Asian people total have ever hosted the show in its 44-plus years of existence. So while Awkwafina is ready for her closeup, she should know she's making a little history at the same time.

She's definitely bringing the party, as advertised. And, as a quick reminder, she's not doing double duty in her first SNL outing. In fact, musician Travis Scott — yes, that Travis Scott — is making his debut as well. He's a funny dude, though, so it's entirely possible that he shows up in a sketch before the end of the night. Plus, if there's any justice in the world, Awkwafina will be able to rap in one of her sketches. Or maybe, just maybe, bring along a celebrity friend from this summer's Crazy Rich Asians or Ocean's 8? (Man, 2018 is definitely her year to shine.)

Since SNL began in the '70s, its hosts of Asian descent include: Jackie Chan, Aziz Ansari, Kumail Nanjiani, Lucy Liu, and as of October 6, Awkwafina. That is likely — but not definitively — the complete list. For the record, Chan first hosted in 2000 as well. So that means it's possible that the series ran for roughly two and a half decades before any Asian-American performer had the opportunity to host. That's a big deal, and in more ways than one.

Saturday Night Live rarely pokes fun at itself during an episode, and when it does, it makes headlines. (For example: The 2013 episode in which host Kerry Washington scrambled to play multiple black women in the same sketch, written to illustrate that the show was aware of its lack of diversity — and critical response to it.) It will be interesting to see if this is reflected in Awkwafina's episode at all.

Not that it has to be, of course. The multi-hyphenate is a force on her own, and is obviously game for whatever the show has planned for her. This first episode promo definitely proves that.