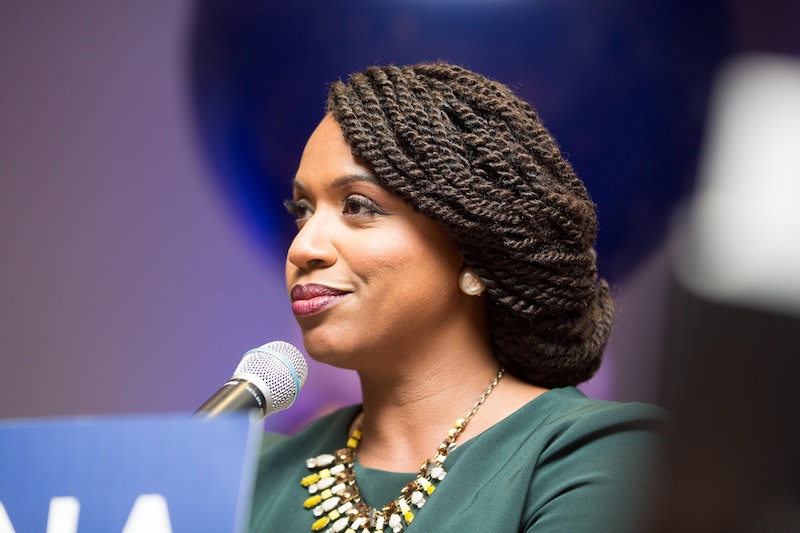 The 26th Amendment, which lowered the voting age to 18, was hailed as a major step toward expanding democracy in America. But according to some, voting at 18 isn't enough, and a freshman Democrat in Congress is trying to lower the age limit even further. Rep. Ayanna Pressley's voting age amendment would lower the voting age to 16, giving teenagers a much stronger voice in national politics.

"I am honored & excited to be introducing my very 1st amendment on the House floor, an amendment to #HR1, the #ForthePeopleAct," Pressley tweeted on Wednesday. "My amendment will lower the voting age from 18 to 16, allowing our youth to have a seat at the table of democracy."

Pressley's office issued a fact sheet justifying the For the People Act amendment, and her reasoning touches on everything from recent movements that have gotten young people engaged in politics to the fact that most people can work (and pay taxes) by 16.

"Young people across the country have mobilized, marched, and protested in support of important issues like gun control, climate change, school safety, and social injustice," the fact sheet reads. "At 16 years old, young people can work, pay taxes and contribute to the economy."

"It is beyond appropriate that we extend an opportunity for young people to play a role in electing our Representatives both in the halls of Congress and the White House," Pressley's fact sheet continued.

Specifically, Pressley's amendment would allow teens as young as 16 to vote in federal elections across the country, according to NBC Boston. They would still have to wait until 18 to vote in state and local elections, but they'd at least be able to have their say in who gets elected to Congress and who ends up in the White House. As NBC Boston noted, there are already many states that allow 16- and 17-year-olds to pre-register to vote, which gives them that right as soon as they turn 18, but that pre-registration doesn't actually give them the right to start voting earlier.

“These youth, our young people who will inherit the nature we design here by virtue of our policies or by default of our policies and authorities — these very same young people should have a say in who represents them,” Pressley said while introducing the amendment in Congress. “Our young people deserve to have the opportunity to exercise their right to vote.”

The idea of moving the voting age down to 16 does have its detractors, however.

"I did raise three teenagers and based on that I’d be pretty dubious about lowering [the voting age] to 16,” Massachusetts Gov. Charlie Baker told The Boston Globe. And besides just anecdotal evidence, the bulk of academic research agrees that those two year between the ages of 16 and 18 do make a difference in terms of brain maturity.

There are also significant benefits to the policy, though. Letting people vote earlier makes them more engaged voters for life — and it also engages their parents more, as The Washington Post reports. And with such an important election coming up in 2020, perhaps Pressley's proposed amendment could have an even greater impact than previously imagined.