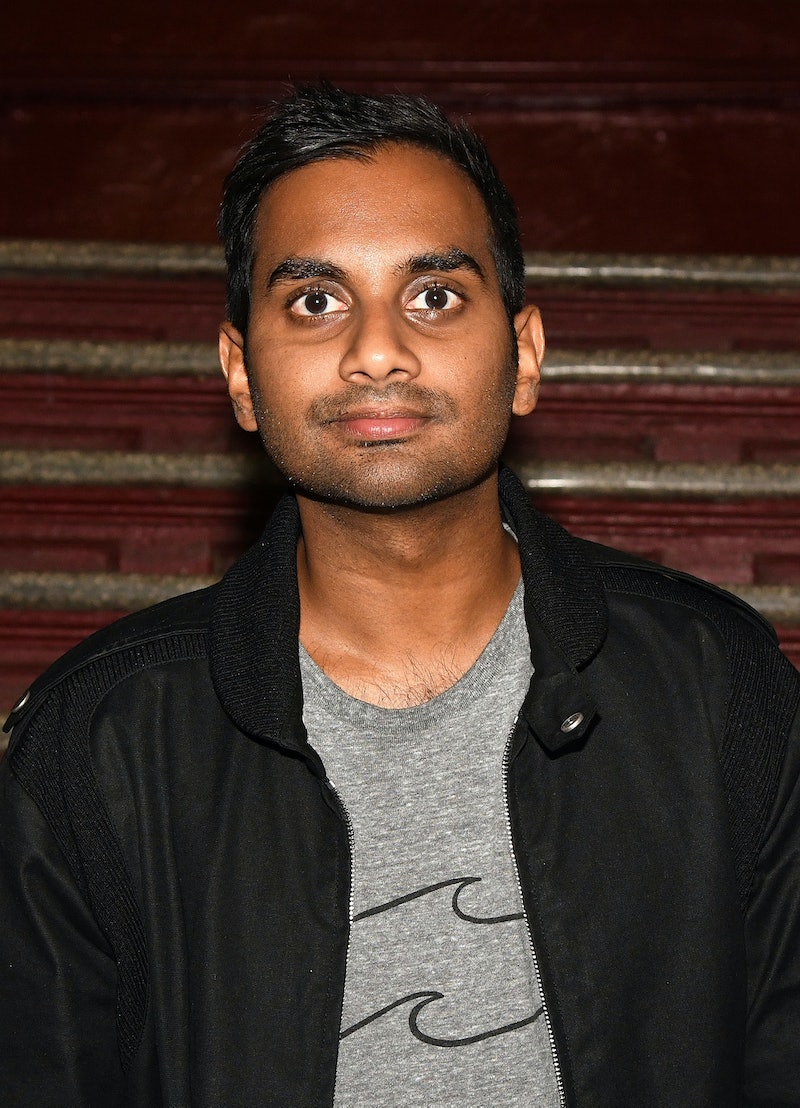 On Monday, Feb. 11, at his New York City comedy pop-up show, Aziz Ansari addressed the sexual misconduct allegations that made headlines in 2018, according to Vulture. It was the first time in over a year that Ansari had publicly reflected on the report from Babe.net, which detailed an alleged 2017 sexual encounter with Ansari in which a 23-year-old photographer said she felt coerced and pressured into engaging in sexual activities with the actor.

The article itself came under scrutiny by many, sparking a conversation on the line between what Bari Weiss of the New York Times called "bad sex" and an alleged lack of affirmative consent. Just four days after the allegations were made, on Jan. 17, 2018, Ansari released a statement explaining that he was "surprised and concerned" by the report, but in his latest statements, he delves into why he hasn't talked about the allegations further until now.

According to Vulture, Ansari's show at the Village Underground — a venue owned by the Comedy Cellar, the NYC club where Louis C.K. made his comeback months after admitting to several acts of misconduct — started out like most of his recent stand-up shows. That is, until he told a joke about being mistaken for a fellow Netflix star, Patriot Act host Hasan Minhaj, on the streets of New York that made reference to the allegations.

The joke reportedly played out as follows: “'Oh, no, Aziz, right?'" the passerby asks Ansari before the two get into a back and forth about how this guy recognizes him for Master Of None and Parks and Recreation. "'And you had the whole thing come out last year — sexual misconduct?'" the man says only for Ansari to reportedly deliver the punchline, "No, no, no, no, no, no, that’s Hasan!”

Following the joke, Ansari reportedly took a seat during his stand-up and began to talk candidly about the allegations. Vulture's Jesse David Fox, who attended the show, which required audience members to turn in their phones, reported that Ansari revealed that he hadn't talked about the allegations publicly because he wanted time to process. “It’s a terrifying thing to talk about," he reportedly said, which is why he wanted to really think about how he wanted to address the story.

“There were times I felt really upset and humiliated and embarrassed, and ultimately I just felt terrible this person felt this way,” he reportedly told the crowd. “But you know, after a year, how I feel about it is, I hope it was a step forward. It made me think about a lot, and I hope I’ve become a better person.”

Ansari also reportedly said that the allegations forced him and others he knew to really think about their prior dating experience. “If that has made not just me but other guys think about this, and just be more thoughtful and aware and willing to go that extra mile, and make sure someone else is comfortable in that moment," he reportedly said. "That’s a good thing.”

Ansari's latest comments show that these allegations go beyond questions about the original reporting. As the comedian reportedly noted, it's time for all of us to have an important and long overdue conversation about sex and consent.

Whether Ansari will continue to speak about this in his stand-up or elsewhere is unclear, but it shouldn't stop anyone else from having these conversations publicly or privately so that dating becomes safer for everyone.