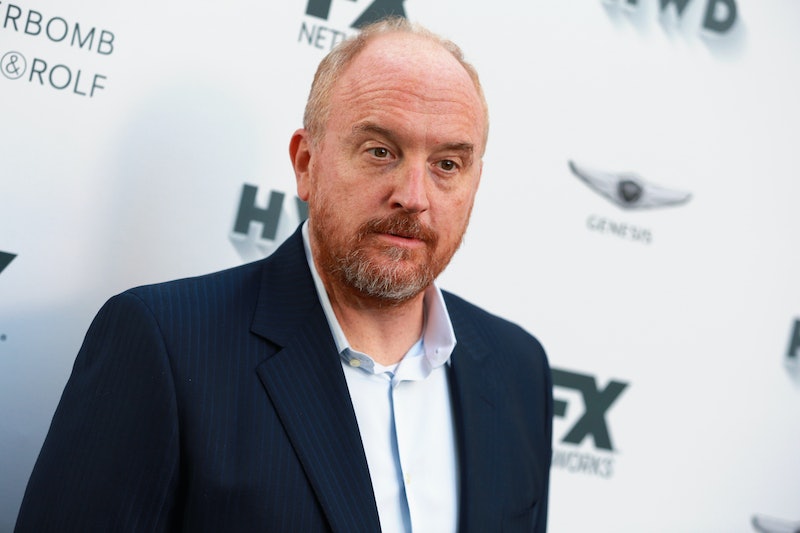 I don't think I'm alone in saying, I'm so tired of Louis C.K. A little over a year after he admitted to committing several acts of sexual misconduct, his dreadful return to the stage at the Comedy Cellar in New York City is repeatedly filling my Twitter timeline with anger. Rightfully so, especially after C.K.'s latest set reportedly mocked the Parkland shooting survivors and the LGBTQ+ community. But before the ball drops and 2019 begins, I'd like to propose that we start the new year off right by leaving Louis C.K. in 2018.

In a leaked bootleg video of C.K.'s latest set reportedly from a Long Island comedy club on Dec. 16, according to Time, he made jokes about society's obsession with political correctness by railing against non-binary people who use "they/them" pronouns and mocking survivors of the Parkland shooting.

“You’re not interesting because you went to a high school where a kid got shot. Why does that mean I have to listen to you?” C.K. reportedly said in audio from the hour-long set. “How does that make you interesting, you didn’t get shot, you pushed some fat kid in the way and now I gotta listen to you talking?”

The thing is he doesn't have to listen to them and luckily, we don't have to listen to him either. As Judd Apatow pointed out, C.K.'s latest set was a "hacky, unfunny, shallow routine" that showed how little self-reflection he's done in the past year. Instead of thinking about what he's done, CK has appeared to spend time coming up with material that makes light of his actions and other people's pain. "It's much easier to laugh at our most vulnerable," Apatow tweeted, "than to look at their pain directly & show them love and concern." He continued in a series of tweets, suggesting that next time C.K. attempts a comeback, he focus on himself instead of others when it comes to punchlines.

Andy Richter tweeted that this kind of mockery "is not brave. It’s not hilarious because it offends some people. It’s a FORMULA, and an increasingly lazy one." In other words, it's a "poor me" routine from someone who's choosing to blame others for his own mistakes by punching down, a comedy cardinal sin.

C.K.'s ability to return to the stage is a frustrating sign that the men of #MeToo will get away unscathed for their bad behavior that ruined the lives of countless women, but seemingly can't ruin theirs. Meanwhile, the women whose careers were reportedly sidelined by him go unnamed in many articles and mentions of the comedian's comeback. Those women are Dana Min Goodman, Julia Wolov, Abby Schachner, Rebecca Corry, and a fifth woman, who spoke to the New York Times on condition of anonymity.

Time and time again, C.K. has found himself in the headlines, and as someone who still enjoys quite a bit of public support, his comeback can't be completely ignored. However, neither can the latest anger surrounding his current set.

C.K. is a comedian whose best days are behind him, and he proved that with this retrograde performance that had him going low to stay relevant. The anger he displayed in his set only begets more anger instead of any real thoughtful or illuminating discussions. And, yes, this is important to point out and discuss, but I'm so tired of being angry over C.K. and this bitter comeback that proves how little he's learned from his mistakes. And perhaps worse, how little he cares about learning from those mistakes.

So in 2019, I'd rather talk about the comedians who deserve attention for improving upon the medium instead of degrading it. Those undiscovered comedians around the United States and around the world like Emma Willmann and Demi Adejuyigbe, who deserve the tweets more than C.K. does. Those comedians like Hannah Gadsby, Michelle Wolf, and Nicole Byer, who saw success in 2018 and deserve more attention for whatever they decide to do in this upcoming year.

And I'm not the only one getting ready to leave C.K. behind in the new year. Delaney Tarr, a Parkland student and one of the founders of March for Our Lives, responded to the comedian on Twitter, writing, "WE'RE NOT TAKING THIS ENERGY INTO 2019."

The new year is a time for resolutions, and while C.K. has resolved himself to a brand of humor that angers and offends. I've also made a decision. In 2019, I'm deleting Louis C.K., who doesn't deserve any more of my time or my timeline.