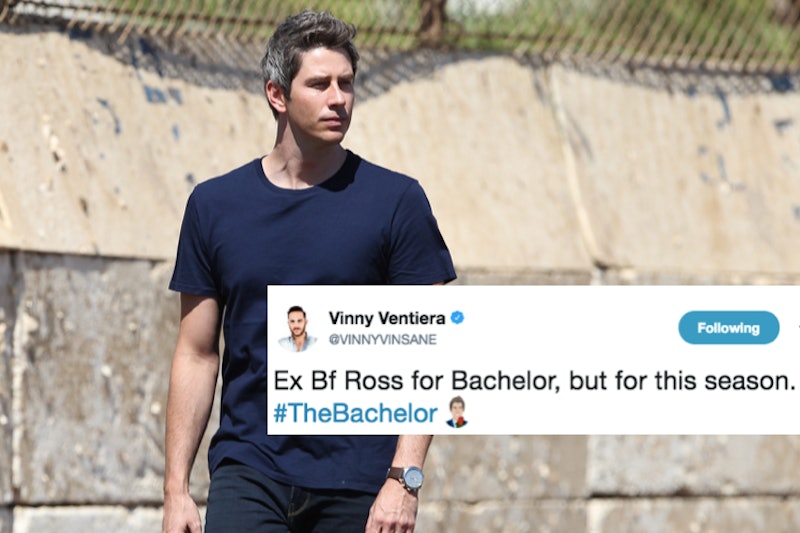 The most dramatic moment (so far) of the most dramatic season (for now) of The Bachelor is finally here — Becca K.'s ex, Ross, showed up in Peru to ask Becca to marry him because he just couldn't let his "girl" go. Yikes! Arie and Becca may not have been happy that Ross showed up on their South American adventure, but Bachelor fans sure were! In fact, fans wanted Becca to get back together with Ross on The Bachelor and leave Arie and his face-holding kissing technique behind. Tough day for the actual Bachelor, huh?

Ross and Becca dated for seven years, and he was the one who got Becca through the death of her father when she was just 19. But, as Becca told Arie in a one-on-one date, they grew apart, and they split about a year before The Bachelor started filming. But Ross was still holding a candle for her, and he decided to make the very long trip to Peru to try and win her back. In the movies, this sort of thing works, but anyone in Ross' life probably could have told him that this was ill-advised. Oh well! He's here, he has flowers in hand, and he already asked Arie for permission (this was ridiculous) to talk to Becca. He's ready! And the fans are ready for more Ross, too!

Some People Wanted Them Back Together

Fans saw something there, even if Becca didn't.

Others Thought Ross Would Make A Great Bachelor

Can we talk about how shady that Vinny tweet is?

There Was Support For A Chance On 'Paradise'

And Plenty Of Single Fans, Too

If Becca didn't want him, some other ladies do.

Ross took a huge (producer-sponsored) leap of faith to go and try and get Becca back, but it ended up not working out well for him. Arie was mad that he was there, and Becca was very, very unhappy to see Ross. Poor Ross and his poor deflated heart. Becca told him that he thinks that life is a movie (which is funny, since they're on a television show right now), and that just showing up out of the blue and trying to insert himself in her life after a year of being apart is "so him." That sort of makes me think that Becca and Ross have had these problems before, no? Not of the "let me show up out of the blue after you've become a finalist on a reality television institution" variety, but of the more subtle kind. Becca talked about it a little with Arie, saying:

Becca and Ross went through a lot together — seven years is a long time for a relationship — but Ross has to know that this relationship has run its course. That being said, Bachelor Nation fans are clearly clamoring for more Ross, so maybe ABC can consider him for his own show? Or at least a spin with The Bachelor and The Bachelorette's latest rejects on Bachelor In Paradise? It's the least they can do for breaking his heart on national television.