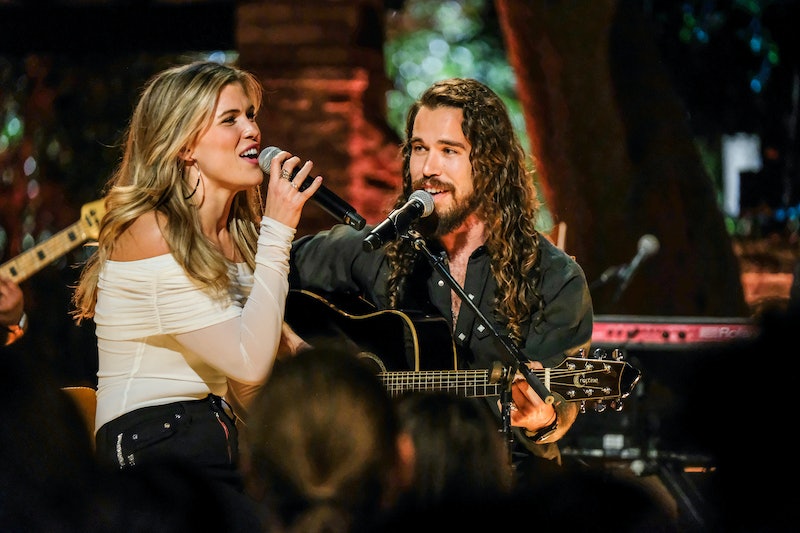 The series may be called Listen To Your Heart, but after Monday night's episode Julia definitely walked away with some serious regrets. Instead of staying with her initial partner, Sheridan, the Pennsylvania native decided to risk it all by exploring her feelings for Brandon — however, their lack of chemistry on stage ultimately got them eliminated and left Julia with a newfound appreciation for the relationship she let get away. And while Julia and Sheridan aren't dating after Listen To Your Heart, the two of them did start talking after production wrapped, which left Julia hopeful that they could eventually reignite that flame. But alas, some things just aren't meant to be.

Speaking after her elimination, Julia revealed that she and Sheridan had been in "constant contact" after filming ended, but that all came to a crashing halt after he watched the show's second episode and saw how much she had been pining for Brandon behind the scenes. "I think he's understandably hurt," Julia told Entertainment Weekly. "I apologized to him and I said, 'I understand why you would like some space right now.' And I owned up to the fact that I made some major mistakes in the way that I handled these situations."

Watching the season unfold has definitely been an eye-opening journey for her as well, helping her realize what a catch Sheridan really was. "He had the one quality that I've looked for in a man, which is someone who knows who they are. I find that so attractive," Julia explained. "I've always said I want someone who reminds me of my father as far as the kind of heart they have, and Sheridan definitely does."

As for whether or not he'll be willing to pick things up where they left off, that remains unclear. For his part, Sheridan is getting his feelings out in the best way he knows how: through music. In fact, he just released a new single "Coming Back," which fans caught a sneak peek of during Monday night's episode. It's the song he wrote for Julia just before their devastating breakup.

So now that the tables have been turned, will Sheridan come back into Julia's life at some point? That's for him to know and for us to obsess over for the foreseeable future.

More like this
The Bachelor’s Christina Mandrell Comes From One Of Country Music’s Most Famous Families
By Brad Witter
Brianna Revealed Why 'The Bachelor' Premiere Was Tougher For Her Than You Saw On TV
By Brad Witter
Bachelor Zach’s “Dream Job” Has Nothing To Do With His Work In The Tech Industry
By Brad Witter
Hannah Ann Got Engaged 3 Years After 'The Bachelor' & The Proposal Was Dreamy
By Grace Wehniainen
Get Even More From Bustle — Sign Up For The Newsletter
From hair trends to relationship advice, our daily newsletter has everything you need to sound like a person who’s on TikTok, even if you aren’t.