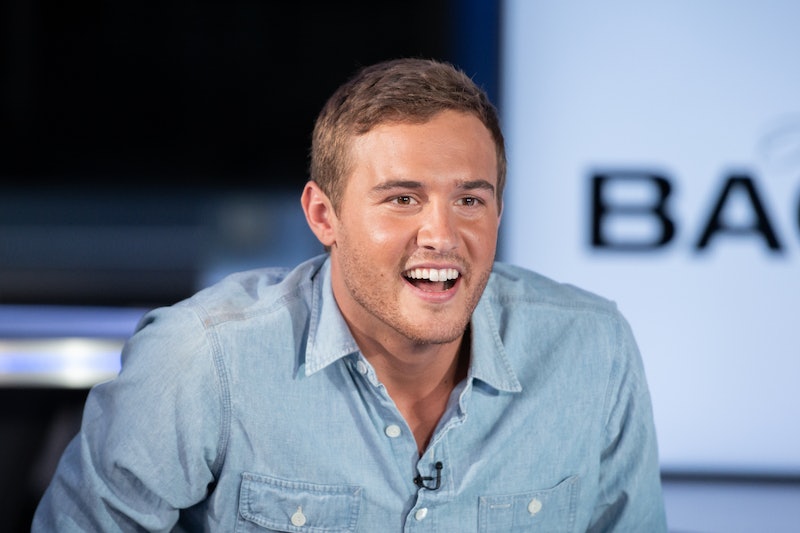 Before Peter Weber became a commercial pilot, he seemingly starred in an actual commercial, believe it or not. You'll likely remember the national TV spot, but what many didn't know is that Bachelor Peter was reportedly the Sylvan Learning kid back when he preferred a skateboard to an airplane, as pointed out on Twitter by The Bachelor super fan @BrettSVergara. As a once-struggling student named Mark, the Bachelor star slyly slid his report card on a skateboard to surprise his mom in the clip. (Bustle reached out to ABC for comment on Peter's early role, but did not receive an immediate response.)

Judging by her emotional reaction and their sweet embrace, it seemed that "Mark" had made the grade. "School is tough," Peter explained in the academic tutoring center's 2005 advertisement. "Then Sylvan helped me read better."

It turns out the advertisement wasn't even the Bachelor star's first credit as a child actor. Peter also appeared in Days of Our Lives as young Roman Brady in a 2003 episode of the daytime soap opera, according to his IMDB page. By now everyone knows that the California native's acting career didn't quite take off, however, and Peter now plans to be pilot until he retires. "That’s my passion. . . .my first love," he said of flying, in a USA Today interview published on Jan. 3.

So it makes sense that what Peter is looking for in a future partner is someone who would be understanding of that passion, and also able to "handle" the lifestyle that "comes with that." Explaining that he "wanted to be honest" with the Season 24 Bachelor contestants from the beginning, the commercial pilot told People in a Dec. 2019 interview that he "didn’t want them to go into this blindly and not truly understand what it’s like to possibly be a pilot’s wife one day."

Could that woman perhaps be Hannah? After ABC's Season 15 Bachelorette dumped him ahead of the show's July 2019 finale, Hannah reunited with Peter on The Bachelor this year in the hopes of getting a second chance with the pilot. Suffice it to say, the sexual tension was palpable — and they even came close to sharing a kiss. "I don't know if I made the right decision with you," she told him in the recent episode.

Peter's reply? "You’re the one who said no to me. I never said no to you. I just want someone to want me as bad as I want them." Despite admitting in a confessional that he actually had wanted to kiss Hannah, he seemed to be leaving their romance in the past at that point. That hasn't stopped Bachelor Nation stans from believing there's still hope for Peter and Hannah though.

Regardless of how the rest of his season shakes out, Peter's early acting gig seems to have taught him that knowledge is power. And, for that, his commercial gets an A+.