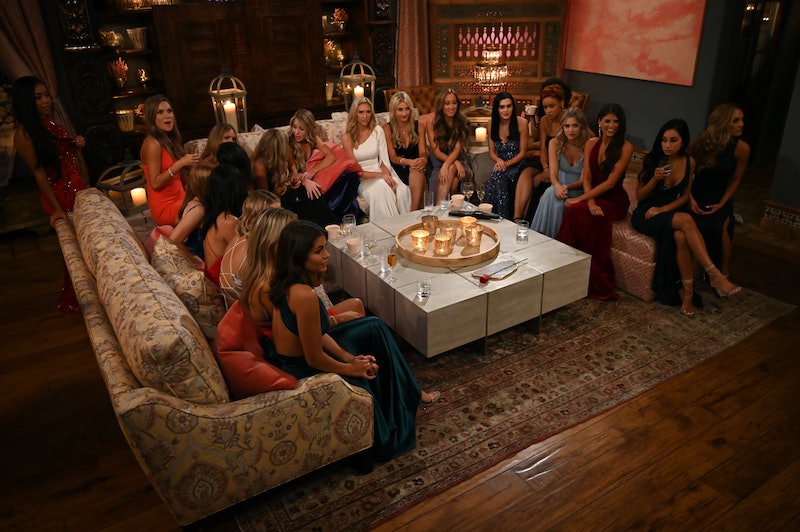 If you've watched any season of the ABC's The Bachelor or The Bachelorette, you know that the job descriptions that appear under contestants' names aren't always intended literally. Kelly Travis from Juan Pablo's season was listed simply as "Dog Lover"; JJ O'Brien from Andi's season was labeled a "Pantsapreneur"; James S. from Hannah's season had his occupation listed as "Bachelor Superfan." Some of the series' best jokes appear in the chyrons.

But there's a difference between a joke job title and a job title that obscures who these contestants really are. Of course, the show itself is a highly contrived and sleekly edited fantasy of love, but the premise has been that if you throw a bunch of real people earnestly looking for romance into a bunch of romantic situations, a kinda-sorta-real romance can emerge. Just as the real world is populated by nurses and realtors and administrative assistants, so, too, is the Bachelor Mansion. Except many of these women aren't simply the nurses and realtors and administrative assistants their chyrons advertise them to be. Many are models and influencers and pageant queens, too. So Bustle trawled Instagram for the reality behind the reality — and as it turns out, Peter seems to have a type.

The commercial-pilot-turned-professional-wife-hunter's IG bio is a riddle, wrapped in a mystery, inside the title of a Leonardo Dicaprio movie about a guy only pretending to be a commercial pilot: "Catch me if you can."

In her official ABC bio, Alayah's is listed as "orthodontist assistant," but most of her 32,000-plus followers probably know her as Miss Texas 2019.

On top of a relatively new personal account, Alexa has an Instagram for her esthetician practice, @LexaRaeBeauty.

Courtney is a hairdresser with a penchant for basic IG posts: over-the-plane-wing shots, bathroom selfies, vague yet inspirational quotes ("There are seven days in a week, someday isn't one of them"), etc.

Deandra, who judging by the post above sails past night one in the mansion, is a Texas "home care coordinator" with a YouTube channel full of shopping haul videos.

Jade makes for two flight attendants for Pilot Pete to choose from.

Jasmine is a client relations manager. Her Instagram bio espouses a deep love for Chick-fil-A.

For her limo entrance, nanny Kiarra folded herself into a piece of checked luggage.

On top of her personal account, pro sports dancer Katrina has an Instagram for her hairless cat, @SphynxAndTheCity_.

Kelley is a tax attorney who organizes her IG by global destinations.

Kelsey is a "professional clothier" who was also Miss Iowa in 2017.

Kylie is an entertainment sales associate repped by at least two modeling agencies.

Lauren is a marketing exec for a beauty company by day, but also has her own fashion blog, LovelyLuxe. She used to be a Laker Girl.

Lexi works in real estate in NYC, which may explain why she seems to have access to so many rooftops.

For Madison, a foster parent recruiter, starring on the Bachelor will be her second 15 minutes of fame. She won $8,000 on The Price is Right in 2018.

Maurissa is another contestant with a beauty pageant past. The patient care coordinator was Miss Teen Montana in 2013.

Flight attendant No. 3! Does Pilot Pete have a type?

Mykenna is a fashion influencer who loves wine.

This one's a little confusing. ABC lists Natasha's career as "event planner," but that seems like an undersell! Her personal website features marketing credits on big HBO shows like Insecure and Ballers.

Payton is a business development rep whose posts frequently feature a drink in the foreground. According to ABC, "her favorite way to socialize is over a good glass of wine, and she is coming into this with two glasses."

Sarah is a medical radiographer with over 15,000 Instagram followers.

Savannah is a realtor. Her ABC bio fails to mention she's also a Houston Astros dancer.

According to her ABC bio, Shiann is currently an administrative assistant. Just guess what she used to do for work...

ABC calls Tammy a house flipper, but according to her IG, she's a little more of a multi-hyphenate: "Realtor | Insurance | Investor | Marketing | Bartender | Actress ✈ Jetsetter."

Nurse Victoria P. was once Miss Louisiana. Clearly Peter has a thing for pageant queens — including maybe-contestant Hannah B.?