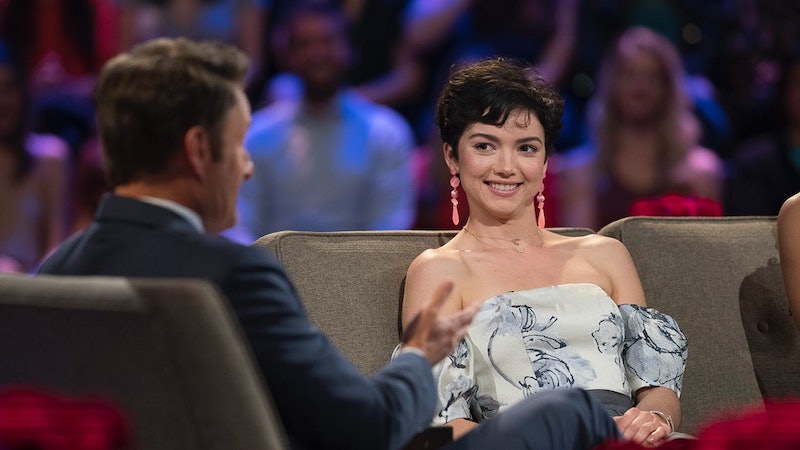 In the past year, a lot has changed for Bekah Martinez — fans first met her when she was competing on Arie Luyendyk Jr.'s season of The Bachelor, and now, she's officially a mom. On Feb. 1, Bekah welcomed her daughter into the world, and just a few days after starting her journey into motherhood, she's sharing an empowering message. On her Instagram Story on Wednesday, Bekah shared a postpartum selfie that was all about the realities of life immediately after childbirth, and her honesty is very inspiring.

Being that Bekah gave birth less than a week ago, postpartum life is still very fresh for her, and that includes the less glamorous stuff... like the mesh undies that she's sporting in her photo. In the pic, Bekah's posing in front of a mirror, showing off her postpartum bump and her super stylish panties, and she took the opportunity to share her thoughts about what she's seen her body do over the past nine months.

"So amazing what we can do," she wrote. "I've never felt so much respect and love for my body, diaper and all. #ThisIsPostPartum."

Giving birth and dealing with the aftermath isn't always pretty, but it seems like Bekah's taking a very positive approach when it comes to this new chapter in her life.

Being that Bekah has always been so candid about her pregnancy journey, it's no surprise that she's taking the same approach toward her postpartum one, too. She was forthcoming about what a surprise finding out she was pregnant was to her, and even shared a YouTube video where she got real about her feelings in that moment.

"The first thing I felt when I saw the positive was pure shock," she admitted at the time. "My hands were shaking, and I was just like 'oh my god.'"

And since the moment her little girl arrived last week, her honesty hasn't changed; in fact, she's seemed happy to share. She shared photos of her water birth on Instagram, and on Wednesday, she posted an adorable photo of her daughter sound asleep in her carseat, wearing mittens and an adorable hat.

"This is baby girl only FOUR HOURS after being born!! is she perfect or what?! Grayston — you and I MADE this," Bekah wrote alongside the photo.

So far, it doesn't seem like Bekah and boyfriend Grayston Leonard have settled on a name for their little one, but it's probably safe to assume that she'll keep fans updated when they have picked a name — and on all the other good stuff that comes with having a newborn baby and experiencing life as a mom for the first time.

There's no doubt that Bekah's honesty will help other women who are having similar post-baby experiences to hers. So many topics around childbirth and women's bodies in general are still taboo, but people like Bekah can help change that. Like she said in her post, it's pretty awesome what our bodies can do, so why not celebrate it?