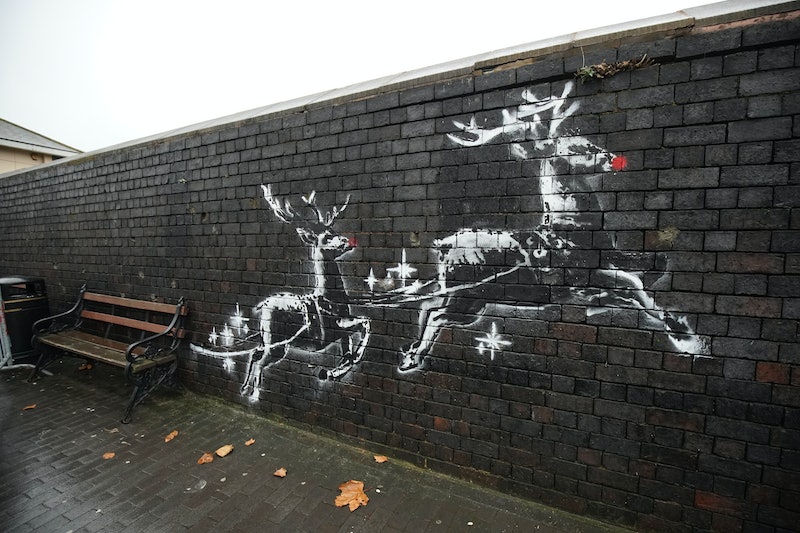 Whether you love his work or don’t really get it, there’s no doubt activist Banksy’s work is some of the most well known modern art in the world and he is one of the most allusive artists there is. Now some new Banksy artwork has appeared in Birmingham and it’s got a festive but political theme.

Banksy is known for keeping his identity under wraps and creating politically charged murals at unexpected times. And in unexpected places. Despite beginning as a street artist, Banksy's work now sells for millions.

The new piece can be found on Vyse Street in Birmingham, and was unveiled via a video on Instagram and has already received more than two million views. In the video, viewers can see two reindeers painted on a wall appearing to pull a real bench, with a man who is sitting on the bench. It is thought to be a commentary on homelessness in the UK. In the caption, the artist said:

“God bless Birmingham. In the 20 minutes we filmed Ryan on this bench passers-by gave him a hot drink, two chocolate bars and a lighter — without him ever asking for anything.”

Already the new artwork has been vandalised, with someone spraying red noses onto the reindeer. The art has now been protected with a covering, however, the BBC reports.

Recently Banksy designed rapper Stormzy’s stab-proof vest he wore for Glastonbury 2019, a commentary on knife crime in the UK. And in 2018, his sold painting Love Is In The Bin’ was shredded upon sale at famous auction house Sotheby’s in London. Sotheby’s said they weren’t in on the prank and a spokesperson for the auction house said, “The new narrative is that Banksy did not destroy a work on its premises, he created one, adding value not detracting.”

Some Birmingham residents might have even caught a sighting of the mysterious artists while he was creating his latest masterpiece. According to Guardian, Martin Clarke, a jeweller at Birmingham's Vault 88, which is across the road from the art, claims he saw people working on the wall. "I saw a small tent with a couple of lads in high-vis vests early in the morning on Friday," Clarke said. "I thought they were from the council and were just doing a bit of upkeep. About half six I looked out the window and the tent had gone as had the lads. Then I saw it. I thought it was great. We weren’t sure what it was at first or who did it but we had a good idea."

More like this
How “Goblin Mode” Came To Be The Oxford Word Of The Year
By Sophie McEvoy
8 Money Saving Experts To Follow For Accessible Advice
By Maxine Harrison
Everything You Need To Know About Dabloons, TikTok’s New Currency
By Catharina Cheung
8 TikTok Accounts Every Royal Fan Needs On Their FYP
By Kira Richards and Frances Stewart
Get The Very Best Of Bustle/UK