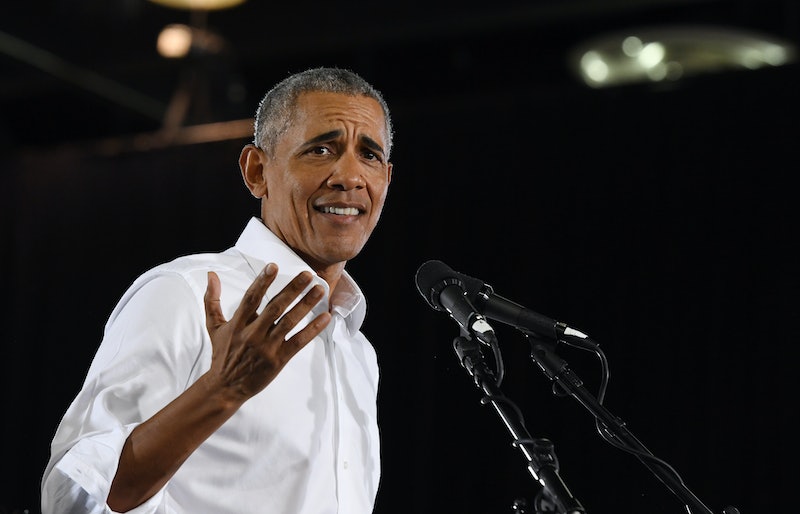 As one of the coolest politicians on the planet, Barack Obama has continually kept in tune with the pulse of pop culture and the American people. And with the year now coming to an end in just a few days, Obama's lists of favorite movies, music, and books from 2018 proves that he just keeps getting better with time. On Friday Dec. 28, the 44th President of the United States took to social media to share his lists of his favorite music, films, and books from 2018 — and his choices certainly did not disappoint.

In the post, which he shared on Instagram, Obama wrote: "As 2018 draws to a close, I’m continuing a favorite tradition of mine and sharing my year-end lists. It gives me a moment to pause and reflect on the year through the books, movies, and music that I found most thought-provoking, inspiring, or just plain loved."

In his caption, Obama offered up the reason for this year's compiling, explaining that it gives him "a chance to highlight talented authors, artists, and storytellers – some who are household names and others who you may not have heard of before." Inviting his followers to inspect his review, Obama continued, "Swipe through to see my best of 2018 list – I hope you enjoy reading, watching, and listening."

His 3-page slideshow kicked-off with a lineup of favorite songs (in alphabetical order) and included a plethora of hip-hip and R&B gems, including: "Apesh*t" by Beyoncé and Jay-Z, "Could've Been" by H.E.R. feat. Bryson Tiller, "I Like It" by Cardi B feat. Bad Bunny and J Balvin, "Kevin's Heart" by J. Cole, "King For a Day" by Anderson East, "Love Lies" by Normani and Khalid, "Make Me Feel" by Janelle Monae, "My Own Thing" by Chance the Rapper feat. Joey Purp, and "Wow Freestyle" by Jay Rock feat. Kendrick Lamar.

The list was quite a mixture of genres and name-dropped dance songs such as "Disco Yes" by Tom Misch and country music tunes "Girl Goin' Nowhere" by Ashley McBryde, and "Every Time I Hear That Song" from 2019 Grammy-nominee Brandi Carlile. Obama also cited alternative and rock tunes such as "Nina Cried Power" by Hozier, and "One Trick Ponies" by Kurt Vile. He ended the series by notably paying homage to jazz legend, Nancy Wilson, who died earlier this month, calling her album The Great American Songbook a classic.

Some of his favorite movies included Golden Globe-nominated films such as Black Panther, BlacKkKlansman, and If Beale Street Could Talk, and other notables such as Support The Girls, Roma, Won't You Be My Neighbor, and South Korean mystery-drama Burning.

Topping off Obama's catalog of the best books he's read in 2018 was obviously his wife Michelle Obama's best-selling memoir, Becoming which he adorably pointed out as his "favorite." He also named Nelson Mandela's Long Walk To Freedom, Raymond Arsenault's Arthur Ashe: A Life, Educated by Tara Westover and the classic Things Fall Apart by Chinua Achebe as faves.

Barack Obama's year-end review is a great reflection on some of entertainment's best releases of the year. All-in-all, the list is definitely a precise expression of his suave and charming persona, and it, more importantly, serves as a reminder of just how much we miss him as our Commander in Chief.