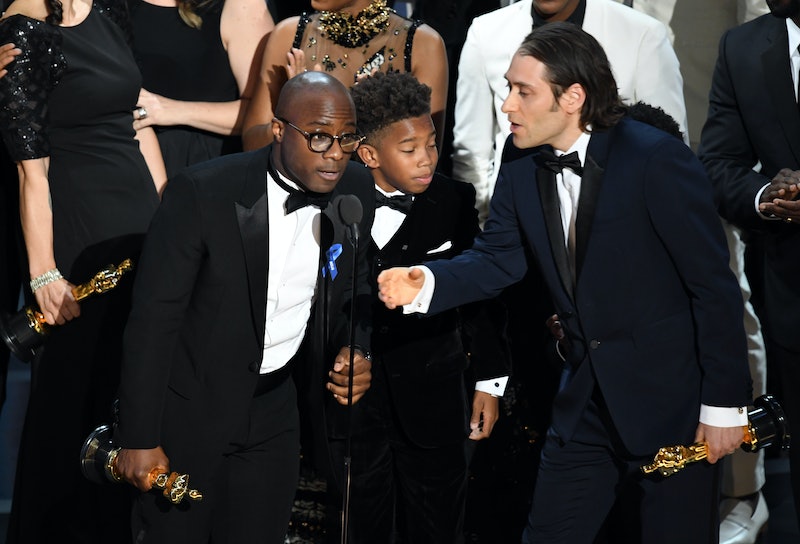 After a mix-up that shocked the world, director Barry Jenkins accepted Moonlight's Best Picture Oscar on Sunday night and said, "Very clearly, even in my dreams this could not be true. But to hell with dreams. I'm done with it because this is true." But, speaking to Entertainment Weekly the day after the award show, Jenkins said that his extemporaneous speech was an "imperfect statement" and shared what his Best Picture speech really would have been. And this one more clearly focuses on what it means to dream as a black American.

If the mix-up had never happened, here's what the now two-time Academy Award winner would have said:

“[Moonlight playwright Tarell Alvin McCraney] and I are this kid. We are Chiron. And you don’t think that kid grows up to be nominated for eight Academy Awards. It’s not a dream he’s allowed to have. I still feel that way. I didn’t think this was possible. But now I look at other people looking at me and if I didn’t think it was possible, how are they going to? But now it’s happened. So what I think of possibility, let’s take it off the table. The thing has happened.”

In a society where heterosexuality and whiteness remain the standard, especially in Hollywood, and creatives of color are still vying for consistent representation on screen, as well as realistic and multidimensional characters, Jenkins' bittersweet perspective on dreaming is not farfetched. Just weeks prior to the Oscars, Beyoncé's groundbreaking and unapologetically black album Lemonade failed to receive the highest Grammy honor in exchange for Adele's strong but safe 25. Consequently, to dream that an independent film starring an all black cast with a plot that focused on an impoverished young man grappling with his sexuality could win Best Picture seemed too good to be true. Yet, a bewildered and unabashedly black director's inescapable audacity defied the odds.

While black Americans, like myself, may be the realization of our ancestors' and Martin Luther King's dream, fantasizing about life outside of discrimination, microaggressions, and racism — or being allowed to dream, as Jenkins explained — remains a revolutionary act even in 2017. And yet, here we stand audaciously, loudly dreaming and striving for more. Now that Jenkins has realized his dream, there's a bit more hope for the those who remain unseen to know that possibilities are indeed endless.

More like this
What Is Mary J. Blige’s Net Worth? The 9-Time Grammy Winner Is Doing “Just Fine”
By Hugh McIntyre
How Andrea Riseborough Got Nominated — & Almost Disqualified For An Oscar
By Jake Viswanath
12 Years Ago, Austin Butler Manifested His Oscar Nom In This Disney Movie Scene
By Jake Viswanath
Yes, You Can Stream ‘To Leslie’ In The UK Now
By Sam Ramsden
Get Even More From Bustle — Sign Up For The Newsletter
From hair trends to relationship advice, our daily newsletter has everything you need to sound like a person who’s on TikTok, even if you aren’t.