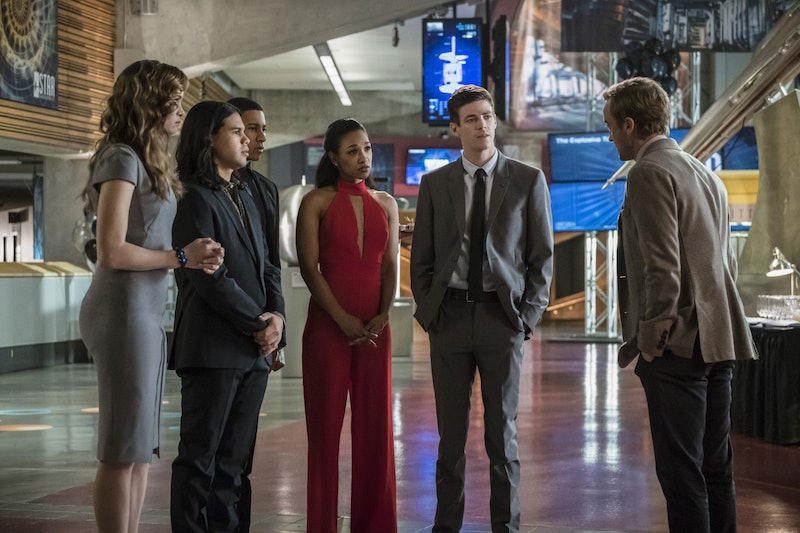 After keeping it a secret for months, Barry finally opened up about his trip to the future, where he saw Savitar kill Iris right in front of him. In The Flash's winter premiere "Borrowing Problems from the Future," the appearance of the thief known as Plunder, the same one mentioned in the newscast he saw in the future, forced Barry to face what he saw. Barry told Iris about her death on The Flash and confided in the rest of the team, finally giving him a chance to make a plan to save her.

Barry decided to tell Iris about the future when Plunder's presence forced him to, and, though it was a shock at first, Iris took the news in stride. In fact, she insisted they tell the rest of the team — just not her dad, who would probably challenge Savitar to a duel if he found out. Telling the team turned out to be a great idea, because now they have a plan to change it. After speaking with H.G. (the new Wells), about the fixed or flexible nature of the future, Barry and the team determine that the only way to change the future is to find out everything that led up to that future and change key elements so as to change the eventual outcome. So, to find out what happens before Iris' death, Cisco and Barry vibe to the future to focus on the headlines on the newscast Barry saw before Savitar killed Iris.

In addition to the detail that the Flash had caught Plunder, Barry and Cisco learned a few other key events had occurred: 1) the Music Maestro got a book deal (note: Music Maestro will be the villain in the upcoming Flash-Supergirl musical crossover episode), 2) the Star Labs Museum closes, 3) Killer Frost is at large, and 4) Central City is recovering from a Gorilla attack (likely the return of Gorilla Grodd). All this happens in the four months between now and Iris' death, and, as Iris notes when Barry and Cisco return from their vibe to the future, none of those things are good.

Knowing the future galvanizes Team Flash to try their best to change it — parts of it, at least. Cisco helps H.G. with the Star Labs Museum, and Cisco, Barry, and the others give Caitlin the okay to have Julian join the team in an effort to get him to help Caitlin get rid of her powers (yep, Julian will officially be joining Team Flash). Most importantly, Barry let Kid Flash capture Plunder, thus changing the future in a tangible way. But, not all changes are for the better. The episode ended with a menacing-looking woman, the metahuman Gypsy, coming out of a rift in a portal between Earths, a photo of Wells in her hand.