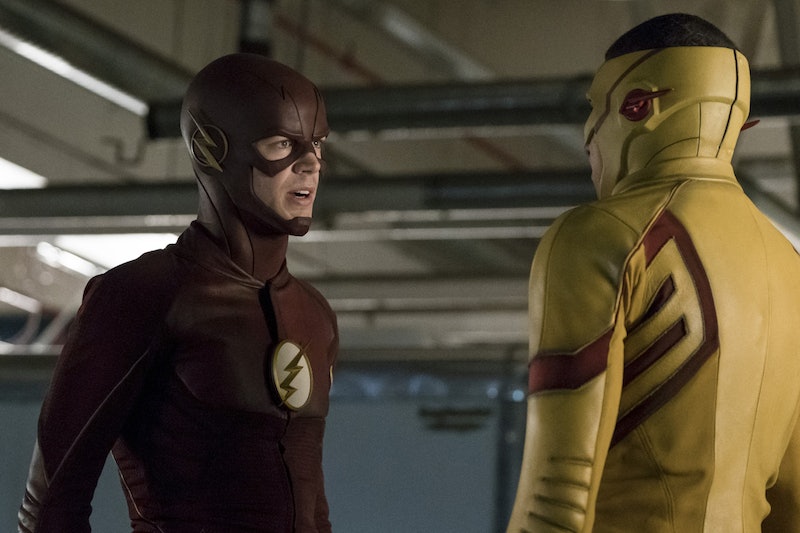 It's been months since Barry saw the love of his life killed by Savitar in a future he wasn't supposed to see in The Flash midseason finale, and, when we finally caught up with him in the winter premiere, "Borrowing Problems from the Future," he still hasn't told anyone about it. Instead of telling his Team Flash coworkers (or, you know, his girlfriend) about his accidental trip into the future, Barry has been having nightmares and desperately looking for ways to change the future. But, when a part of his future vision comes into his life, Barry is forced to deal with it. So, Barry teamed up with Wally to change the future on The Flash, but that might not be enough to save Iris.

Barry's been keeping Iris' impending doom to himself, but that doesn't mean he hasn't still been showing up to work as the Flash. In fact, he's been training Wally in the field, taking him along when he goes to save people and teaching him how to deal with complicated situations. But, when they come against a new robber, Jared Morillo (aka Plunder), Barry sends Wally back. Seeing Plunder triggers Barry's memory of his trip to the future. On the news, right before Iris is killed, an anchor says something about Plunder being imprisoned and how he was captured by the Flash. So, when Kid Flash surprises him at a crime scene and captures Plunder, Barry is pissed.

Barry didn't want to catch Plunder because he thought it meant bringing Iris closer to her death. But, when Plunder escapes police custody, Barry is finally forced to spill the beans. He tells Team Flash (minus Joe) about his trip to the future, and together he and Wally decide to change the future by having Kid Flash be the one to defeat Plunder. It might not change much, but it's a start.

Having Kid Flash be the one to catch Plunder definitely changed the future. The question is, did it change it enough to save Iris, or did it solidify her fate?